if you're e-sports sessions get intense, then this headset might be the right call. 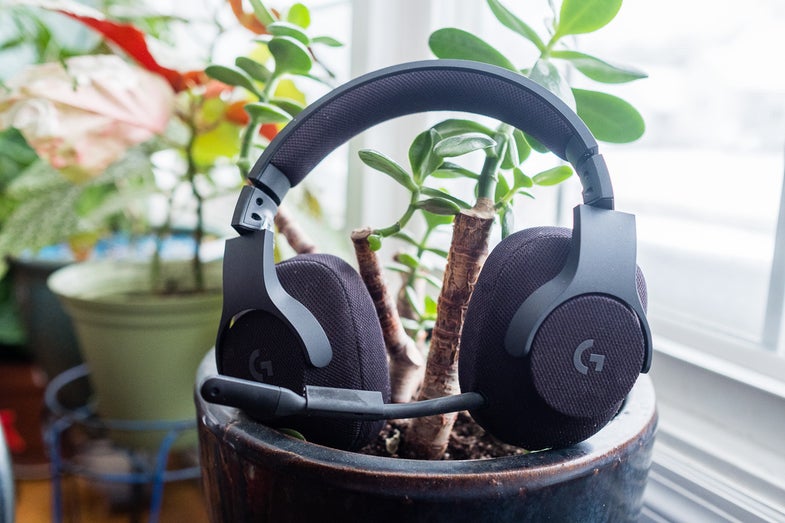 Smartphones have ditched their headphone jacks, bringing in the era of wireless headphones. But, PCs will still have headphone sockets (and USB ports for connecting to digital audio cards) for the foreseeable future, which makes Logitech’s $100 G433 wired gaming headset a reasonable option. It attaches to your computer with a trusty cable, which doles out 7.1-channel surround sound during your gaming sessions.

Logitech took inspiration from e-sports athletes for this headset. Inside, there’s an array of drivers that help the headphones mimic actual surround sound, which is important during gaming. If someone is sneaking up from behind you, for instance, you can really hear the direction of their approach and catch them before they get to you.

This is primarily a gaming headset, so I fired up Overwatch and headed into the fray to see how it handled the din. The first thing I noticed was the strong bass, which rumbles in your head, especially when things get chaotic. The overall sound mix out of the box feels slightly heavy on the low-end of the spectrum, but not to the extent that it covers up important sounds in the higher registers. But, when things really get going, the explosion sounds definitely drown out any music you might otherwise hear. Whether that’s a plus or a minus depends on your personal taste in chaotic melee sounds.

The surround sound is solid, as you’d expect for a pair of headphones with DTS Headphone:X tech, which standardizes performance on this kind of product. They churn out plenty of volume, and I found myself keeping the level cranked to about 75 percent on my machine.

The Logitech computer app allows you to tweak the sound performance of the headset to meet your tastes, including granular options that let you control the individual drivers. I stuck mostly with the preset configuration and made some minor tweaks, but it’s easy to make them sound worse if you get in too deep. It’s easy to fix, but unless you’re super knowledgeable about the tech or you really like tinkering, it’s probably best to just trust the presets.

Unlike some other headsets, this setup is designed to pull double duty as regular headphones, too. When it comes to music, I found the sound profile similarly bass-heavy out of the box, which works with a lot of modern music, but won’t give you the intricacy of a dedicated pair of musical headphones that an audiophile might appreciate. For most people, they’re totally capable as an all-around solution, especially if you like bass.

The fabric you’ll find around the G433 is water-resistant in case you’re the kind of e-sport player who sweats during long sessions behind the mouse and keyboard. It’s soft and rugged, but not quite as supple as the leather you’d find on higher-end audio headphones. You do get a second pair of ear cups, which are made of microfiber. I honestly didn’t notice a huge difference between the two, but I also don’t typically sweat when I game.

One thing I like very much about the G433 is the look. My style is low-key, so many other headsets with flashing lights and bright green streaks all over feel too conspicuous. The G433, however, maintains the same exact color (or pattern, in the case of the blue camo version) all the way around, which makes them vastly more usable as walking-around headphones.

The removable mic attaches with a mini-jack and gives really nice, clear audio. Even when I shouted into it, my teammates could understand me (unfortunately, my neighbors probably could as well). The headphones also come with a second wire that has an inline microphone like a typical pair of earbuds— that microphone isn’t meant for gaming and the sound quality isn’t as great, but it’s a lot more practical if you don’t want to walk around looking like an air traffic controller.

At $100, this isn’t a cheap wired headset. But, in return, you get very good sound with excellent durability. You also don’t have to look like you’re wearing a UFO on your head that’s adorned with all kinds of LED lights.

At times, I found myself glad that they weren’t wireless, especially when I didn’t have to charge them or worry about the battery dying mid game. And if you sweat a lot during long sessions of fragging, then you’ll be hard pressed to find a better set of cans.