A beautiful, powerful media streamer that could be great--and isn't 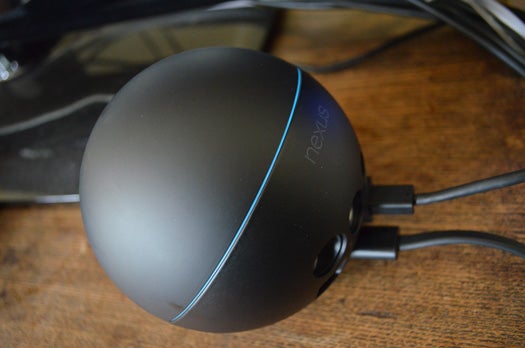 The Nexus Q is Google’s first media streamer, a sphere proudly made in the U.S.A. that streams audio and video to speakers and/or TVs, using an Android device as a remote. It’s also horribly restrictive and limited in functionality–but it has potential, providing either Google or industrious hackers put in some hard work.

The Nexus, aside from being Google’s first entry into this category, includes an amp, so you plug speakers right into it, but you also can (and should) plug it into your TV via HDMI. Paired with a phone or tablet, you can beam audio or video purchased from Google Play right to it, just like with Apple’s AirPlay. It has shiny lights and you can twist the top half of the sphere to adjust volume. You can scatter several of them around your house, and choose where to send music right from your phone, like a Sonos system.

The hardware is awesome, aesthetically as well as spec-wise. It’s made in the U.S., a rarity in the gadget world, and made very well indeed–it’s very small and dense, like a lead grapefruit (good comparison). It’s got a dual-core processor and 16GB of flash storage, so it’s powerful enough to handle just about any media-related task, and a ring of flashing lights circumventing the body that pulses when it’s in use. I love that it has a built-in amp–you can buy speakers cheaply, making the Nexus Q a very futuristic-looking receiver. The NFC works really well; you just tap your phone or tablet to the Nexus Q to pair them. 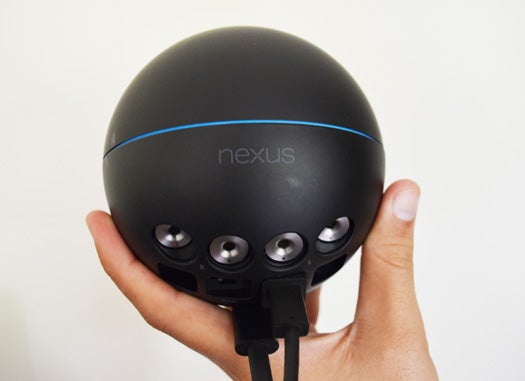 The Nexus Q’s feature-set is deliriously limited. Here’s what you can do: play music uploaded to or purchased from Google Play, play videos purchased or rented from Google Play, and play YouTube videos, from an Android phone. That’s it. No Netflix, Hulu, Rdio, Spotify, or Pandora. No playing videos from your phone or anywhere else on your network. No playing music downloaded from elsewhere. No viewing photos. No web browsing (as painful a process as that is on other media streamers). No apps of any sort (a podcast app, for example, would be welcome). It only works with newish Android devices (at launch, it’ll support devices running Ice Cream Sandwich and Jelly Bean, like the new Nexus 7 tablet). My recurring thought while testing it: “Oh, you can’t do that either, huh?”

I spoke to Google about the omissions, and Google said they see the current state of the Nexus Q as a starting point, to be improved later. But they wouldn’t tell me anything about what plans they have and what features might be in the device’s future.

Actually using the Nexus isn’t incredibly easy to figure out, either. The playlist function, which is what I was most looking forward to, is kind of confusing. It’s tricky to navigate to the playlist, and even trickier to add things–adding one song in an album also adds all songs following it, for example, so you have to go into the playlist and get rid of them one by one. Multiple (Android) users can add to the playlist at the same time, but it’s easy to accidentally switch to a song rather than add it to a playlist (tapping the song plays it; hitting “menu” allows you to add it to a playlist).

Aside from that, I had serious trouble getting it to stay connected with my phone (a Google-provided Galaxy Nexus running Jelly Bean) and streaming at a reasonable quality. YouTube videos buffered at length. Volume refused to stay in one place, muting for no reason sometimes. Video quality was lackluster compared to my other streamers–not as sharp or vivid as it should be.

It also uses unusual cables–microHDMI instead of HDMI, weird banana clips for the speakers instead of the standard dual wire or even RCA jacks. They’re not hard to find, but you almost certainly don’t have them lying around. The ports are recessed quite a bit–if you do have those cables, they may not fit. 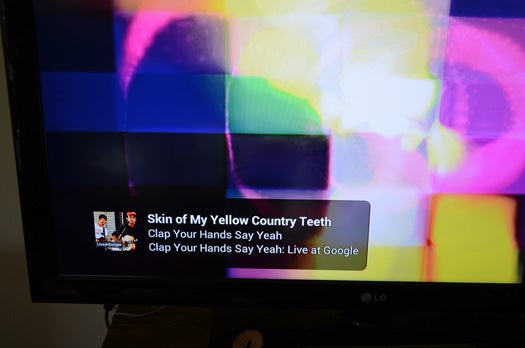 $300. It’s by far the most expensive mainstream media streamer on the market, though it’s hard to say whether it’s competing with set-tops like the Apple TV or music systems like Sonos.

Presumably Google will build out the Nexus Q, considering how powerful and well-made it is physically, but at the moment, it’s so half-baked that I can’t imagine recommending it to anyone. It costs more, does less, and works worse than its competitors.

Despite its much-too-high price, it seems like a great find for hackers–there’s already a project to get XBMC, a long-running alternative media software, on it. That makes it fun for a certain sector, but for the vast majority of people? Skip it. At least for now.