GiiNii AudioBulb Review: You’ve Always Dreamed of a Speaker in Your Lightbulb

A wireless speaker that lives inside your lamp 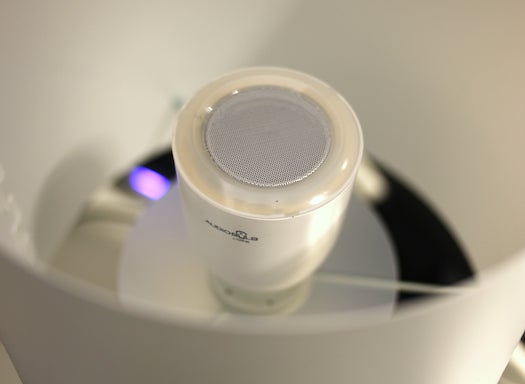 Eventually, practically every conceivable pair of disparate technologies gets combined into a single package—cameras and cellphones, game consoles and e-readers, chocolate and peanut butter. The combination of speakers and lightbulbs seems like it would be one of the last ideas we’d see, but, well, the future is now. GiiNii’s on-the-nose-named AudioBulb brings these strange bedfellows together for the first time.

Each AudioBulb is essentially just a 10-watt-per-channel mini speaker embedded in a five-watt LED bulb (roughly the equivalent of a 60-watt incandescent). You screw the lightbulb/speaker into your regular lightbulb socket, in a lamp or light fixture or whatever, and it provides light as well as sound. The system includes a docking station/router with an iPhone/iPod dock, as well as a 3.5mm jack (also known as a headphone jack) to accommodate non-Apple music players. You place the docking station somewhere around the room, place your audio player in the docking station, and it beams music to the Audiobulb.

Of course, that hardware isn’t exactly new; anyone who wants to send music wirelessly from an iPod dock to remote speakers already has a host of options available, many with a greater signal range than the Audiobulb system’s 100-foot maximum. And LEDs aren’t exactly hard to come by. The innovation is in elegantly shoehorning two very different things into one form factor that doesn’t require expensive or unusual additional equipment. The Audiobulb, shaped like a miniature version of those hats that British police officers wear, is compatible with any standard light socket. Blimey, that’s clever.

Writers are taught not to use clichés like “easy as screwing in a light bulb,” but there’s really no better way to describe how easy the setup is. Plug in the dock and the bulbs pair automatically. You can also easily create separate zones within a house using the remote, so you can send audio to different rooms.

Assuming your lamp can handle the oversized bulb (more on this below), it’s a convenient and unobtrusive option for a bedside table. You can charge your iPhone and play some music, with hardly any extra room taken.

The brightness of the bulbs can be adjusted to four different levels, regardless of the lamp they’re in. The bulbs function normally when the music is off, and they’re eco-friendly—GiiNii claims that with eight hours of use per day, they’ll last for 10 years. 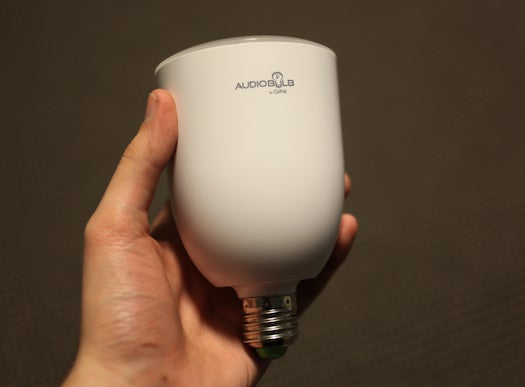 Cramming a speaker into a light bulb comes at the cost of significant additional weight and size. The adjustable neck on one small lamp I tried was unable to support the bulb’s heft, while the harp on another one could not accommodate its 3.35-inch width. And many lamps require screwing in the bulb so that the speaker faces straight up, hardly the optimal angle for projecting music into a room. The sound is a bit hollow, though not much worse than most speakers in the same size and price range.

Using the device in multiple rooms has a downside as well—if you only have one dock and you want to move to another room, you either have to bring it with you, or choose your music and room brightness in advance. (There’s a little remote control, but it has to be pointing at the dock.) Personally, I don’t always know exactly how brightly I want to light a room until I’m in it, and I want to change the music I’m listening to relatively frequently.

The dock and two bulbs sell together for $300, and additional bulbs (the system can support up to eight) cost $99 apiece. It’s pretty expensive–that’s the same price as a Sonos Play:3, a wireless music system with nicer controls and a more established ecosystem (though of course it does not plug into a lamp).

Some gear succeeds by satisfying a need that the electronic-buying public didn’t know it had. That appears to be what GiiNii is attempting to do. The company wants you to feel like you can’t live without having your music come from the same place as your light—even if it’s something that had never before occurred to you to want.

I’m not sure the Audiobulb achieves that goal. It’s unquestionably a smart idea and a fairly nifty package, but there’s a good reason beyond technological limitations why nothing like it had come to market before. I appreciate the convenience of one-remote music and light setting, but setting the two separately just isn’t that onerous. No matter what kind of lamps and stereo equipment, a couple of clicks and switch flips each time is all it takes to set the mood. Even Wilt Chamberlain would have time for that.

But for the non-audiophile who has a house with multiple rooms or zones (and doesn’t mind leaving the same music and light setting on all the time) the Audiobulb does its job well. It will never be the most necessary piece of equipment you have in your house, but it will almost certainly be among the coolest.