It's the most powerful handheld console ever made. But is it enough to get you to put down your iPhone? 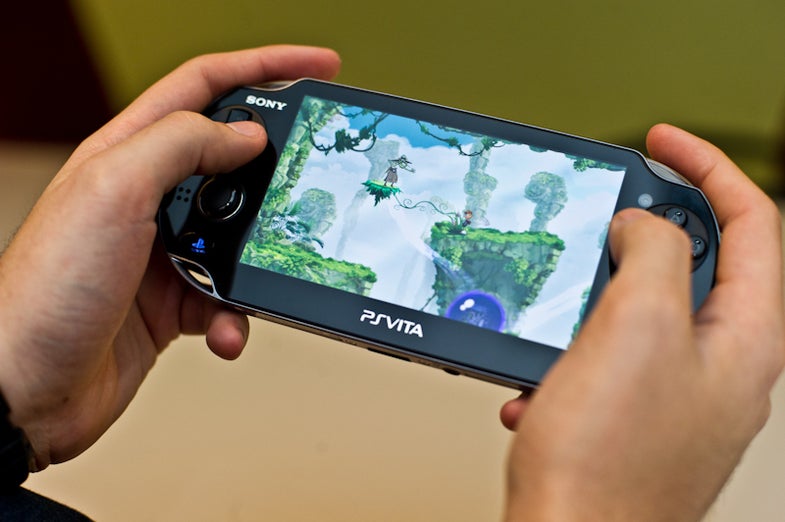 Okay, so: The obvious question here, in 2012, is “Is there any reason to buy a dedicated portable gaming system when I already have a smartphone?” And I will say yes. I’m not a hardcore gamer, and I found the Vita to be not just the most powerful handheld console ever made, but also an awful lot of fun.

The Vita, like the PlayStation Portable (PSP) it replaces, introduces a new type of physical media (a little memory card, in this case, in size somewhere between a microSD card and a regular-sized SD card). The system is ridiculously powerful, boasting a quad-core processor and a quad-core graphics processing unit (GPU), plus 512 MB of RAM. (That’s significantly more powerful than a current-gen iPad or iPhone, let alone a comparatively underpowered Nintendo 3DS.) It has a giant 5-inch OLED touchscreen, and a curious touch-sensitive back panel. It has two analog joysticks to the PSP’s one. It has motion sensing. It is available with 3G. And Sony finally, thankfully makes it easy to download games over the air in addition to purchasing the little physical cards (which are all too easy to lose).

Click to launch a tour of the Vita’s hardware.

The hardware is mostly very, very good. It has that oval-shaped black-and-silver Sony aesthetic, which is sort of shruggingly classy (though the front panel is very glossy and will quickly become very full of fingerprints). The screen is ridiculous. It’s hard to tell until you pick a Vita up how much of a difference that extra screen space makes, compared to, especially, smartphones. It’s a bigger screen than any smartphone (even the very large Samsung Galaxy Nexus), and, of course, your fingers aren’t blocking it because it has actual buttons to use rather than just a touchscreen. It’s super bright, painfully clear, delightfully colorful. Perky, pastel games like Touch My Katamari and Rayman Origins look absurdly cheerful.

The buttons, too, are perfect. Just the right amount of clickiness in the controls, the right amount of movement in the analog joysticks, everything as responsive as can be. Never once did I think to blame my frequent deaths in games on the controls. The touchscreen is also intuitive and responsive, years ahead of the resistive touchscreen of the Nintendo DS models. That’s all helped along by the copious processing power, so games run perfectly smoothly.

The buttons, screen size, and gaming-focused hardware make it, flat out, a better “serious” gaming device than I think it’s possible for a smartphone to be right now. Smartphone games are super impressive, but the best smartphone games are slight in stature, little timewasters like Angry Birds, Tiny Wings, and Words With Friends. The best games on the Vita are full-featured, absorbing titles. I’ve played FIFA on both iOS and on the Vita, and there’s no comparison. On an iPhone, you’re struggling with virtual joysticks (never a good option) on a 3.5-inch screen, made smaller by the fact that your thumbs are blocking a quarter of it. The graphics aren’t as good. The options aren’t as deep. You realize after playing with the Vita that smartphone games are snacks.

The Vita has a very robust OS behind its games. There has to be a way to open and close apps, adjust settings, work with maps and browsers and communication tools and cameras and all sorts of other things. Basically, there’s also a smartphone in there, and I was surprised to find that it’s all very thoughtfully and intuitively laid-out. Swipe up and down between your app/game shortcuts (basically, your home page). Swipe horizontally to switch between open apps/games. Close open apps/games with a little “swipe down from the corner to close” mechanism, like turning a page to be done with whatever you were doing. It’s all very nice. Other reviewers have found this OS confusing. I find them confusing.

The games are crazy. Considering this is a brand-new system, which needs completely new, exclusive games (though you can download older PSP titles), I’m totally impressed with what Sony put together. The highest-profile games include FIFA, Uncharted: Golden Abyss, Wipeout 2048, and Ultimate Marvel vs. Capcom 3. Mostly, they look amazing–at first glance, almost as good as an Xbox 360 or PS3 title. After you use the system for awhile, you realize it’s not quite at that level, but still, a lot of these games are seriously “wow” powerful. They’re not dumbed-down for mobile play at all, which feels almost surprising at first, if you’re used to the smartphone versions of games. 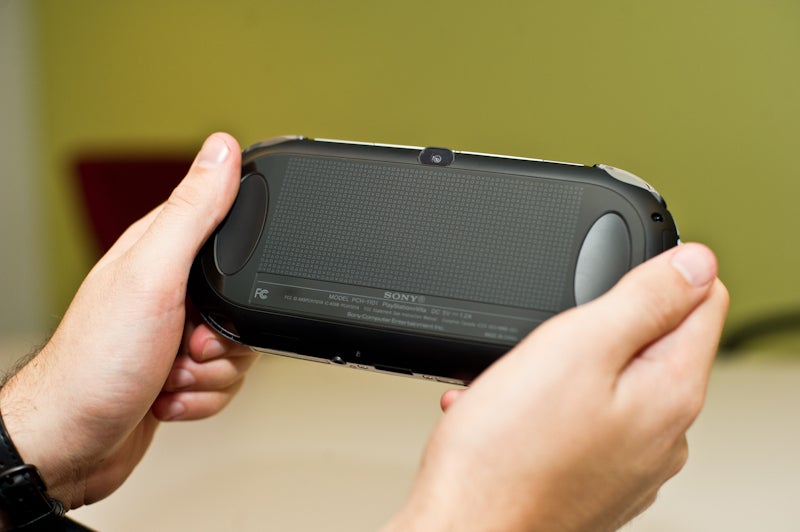 Pretty much everything that’s not literally playing games is disappointing. Yeah, it has a browser and Google Maps, but guaranteed, if you have a smartphone made in the last three years, your phone is better at both those tasks. (There’s no email app, either, and the browser doesn’t support any kind of video, not even YouTube.) The on-screen touch keyboard is especially annoying to use, since you have to reach your thumbs over the PlayStation buttons to hit the screen. The back touch panel is gimmicky; only a few games support it, and I found it very uncomfortable to use without accidentally hitting it, and not especially fun besides. (The exception is in FIFA, where the location you tap on the back panel corresponds to which part of the goal you’re aiming at. Still uncomfortable to hold, but very effective.) There are some oddities in the OS, like the weirdness of having to tap twice to go into any game or app (once to open the thumbnail, another to actually launch it. Why? No idea.) And the speakers are surprisingly timid, volume-wise.

Sony’s taste for proprietary media is a long-standing irritant; the Vita, for example, only supports PS Vita memory cards for things like music and movies, and they are absurdly expensive ($100 for 32GB. SD cards at that capacity cost about thirty bucks). It also is not a particularly open-minded media player, only playing a few types of video and audio files, and the media management software for your computer is very barebones.

The Vita won’t fit in your pocket. Not my pocket, not your pocket, not anyone’s pocket. I don’t mind that, really, because the size is warranted by the screen and the buttons, and I always carry a messenger bag with me anyway. But it’s something to note, because while it is fairly light and well-balanced, it is not particularly small. Battery life is rated at around four or five hours; not great, since my general rule is that a gadget should get me through a flight from New York to San Francisco. The Vita won’t, though it’s not incredibly far off. 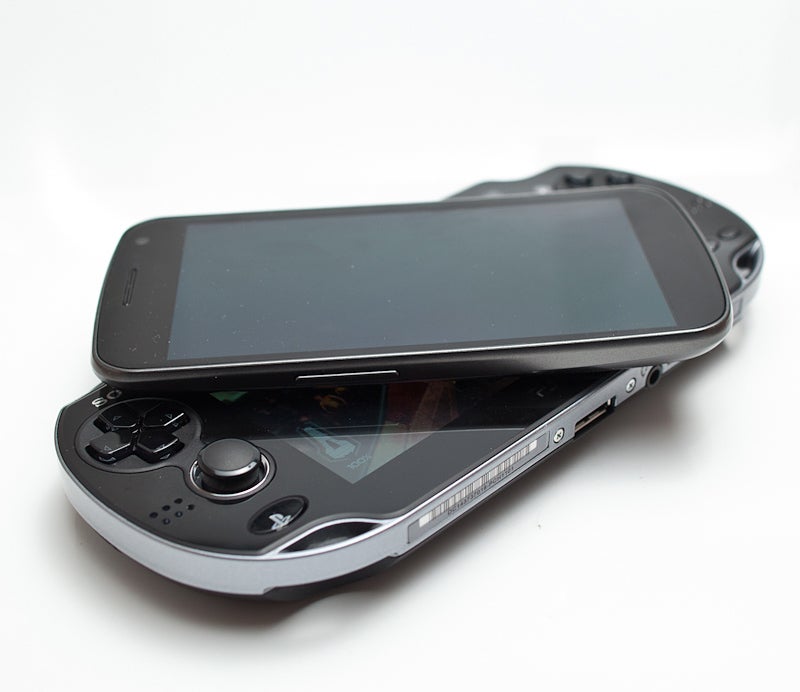 Here’s the Vita with a Samsung Galaxy Nexus, one of the bigger smartphones on the market.

I really like the Vita. The games are great fun, it is astoundingly impressive in a technical sense, it looks excellent, and Rayman Origins is so, so good. Whether it’s worth a buy depends on you: do you often find yourself wishing you had better gaming hardware on the go? Are smartphone games feeling too light, too insubstantial? Then yes, get the Vita. I don’t really mind that the browser and non-gaming apps sort of suck. They’re a bonus, and if your smartphone battery dies or something they might come in handy. The only real drawbacks are the price and the battery life, but I think neither should be a dealbreaker if you’re hungering for some real mobile gaming. The Vita is a games system, and it’s awesome at playing games. 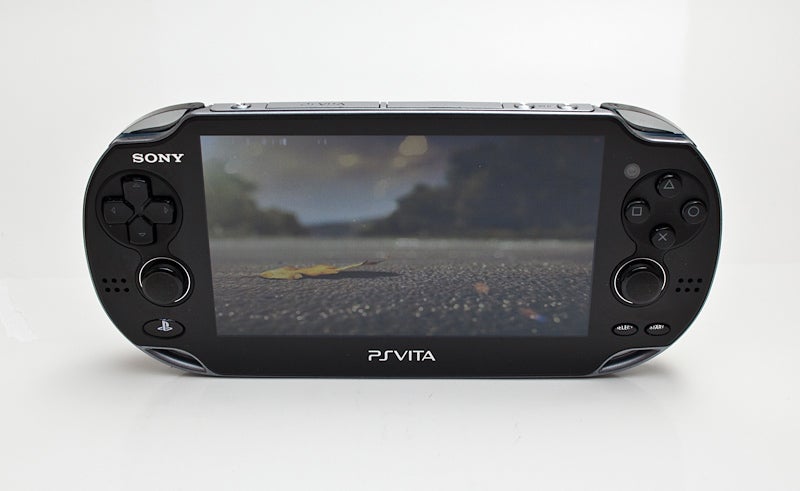 The PlayStation Vita head-on, showing the intro to Wipeout: 2048. 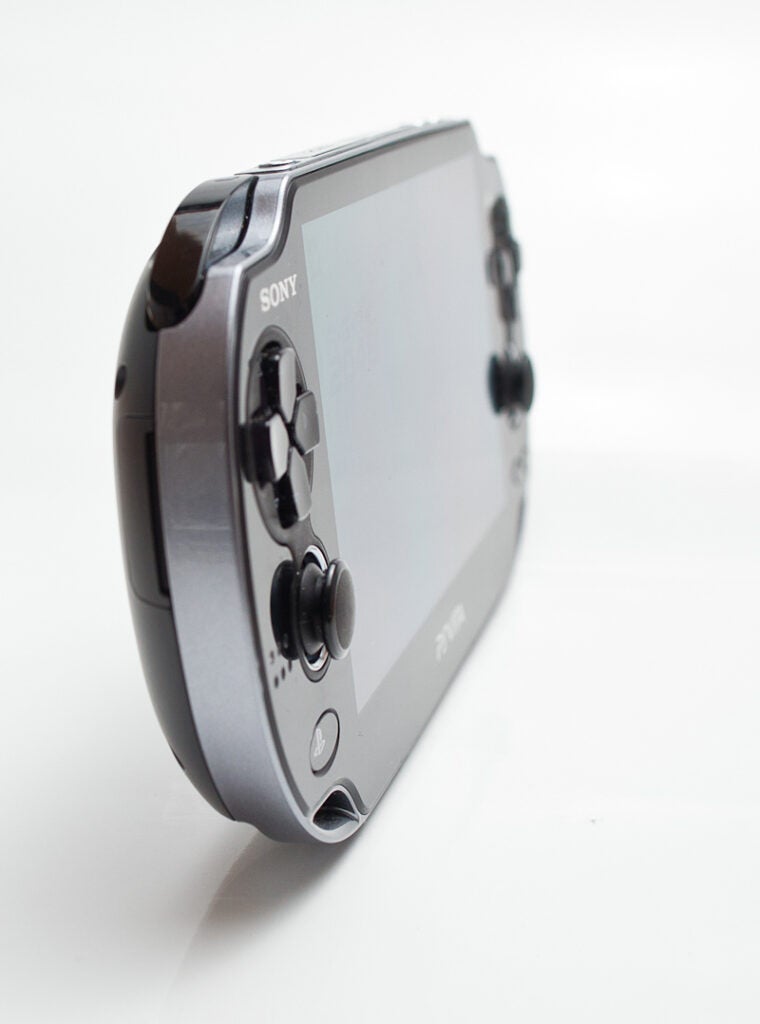 The Vita is fairly thick, but also fairly light and well-balanced. 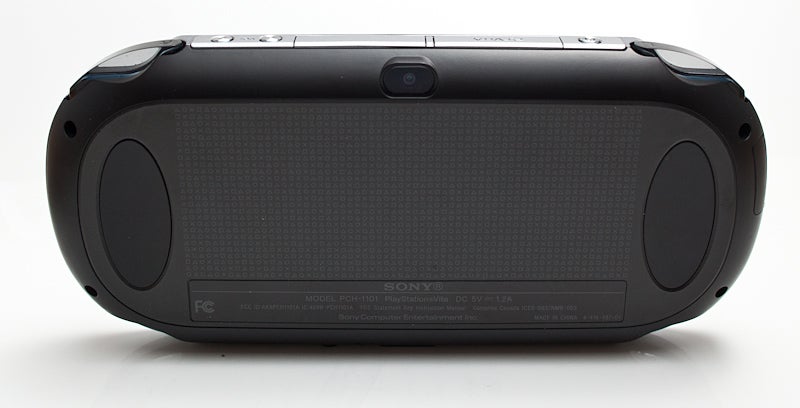 The Vita’s rear-panel is touch-sensitive. It’s kind of uncomfortable to use; your fingers will naturally rest on it while playing, which is not what you want.

The bottom edge hosts the (proprietary, argh) power port and the headphone jack.

The PS Vita next to an Apple iPhone 4. The Vita is much bigger (that is a good observation). 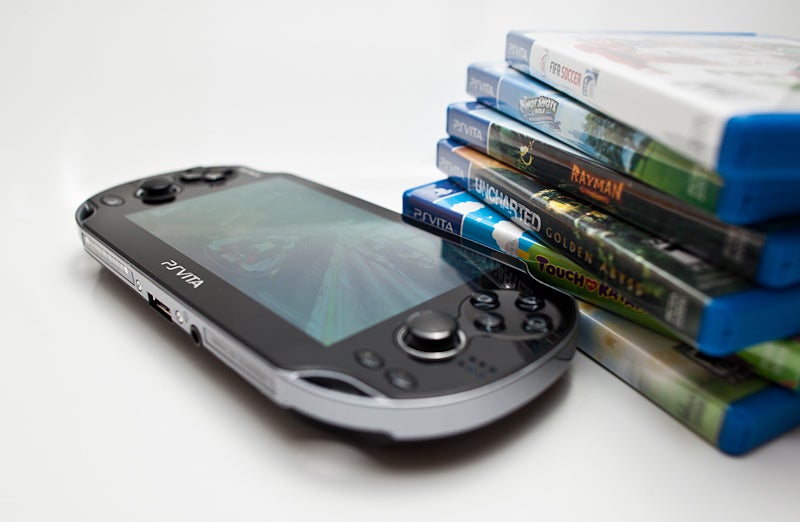 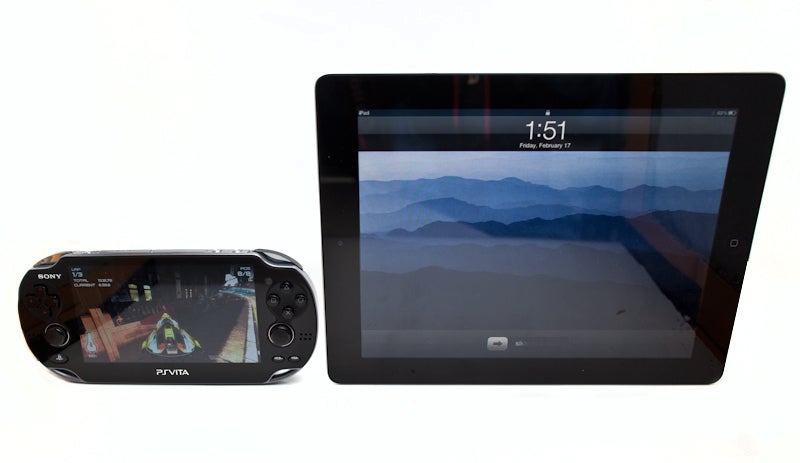 With an iPad 2. The angle is a little odd here, but hopefully this gives a little sense of scale.
reviews
sony