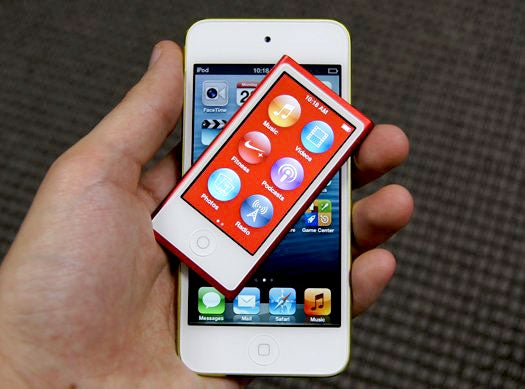 Let’s assume, before we go any further, that you have already decided you want a non-smartphone that can play media (or apps), so we can not waste any time by discussing under which probably weird circumstances you want one of these instead of a smartphone, which is of course much more capable and which you probably already have. No more discussion! Just reviews! 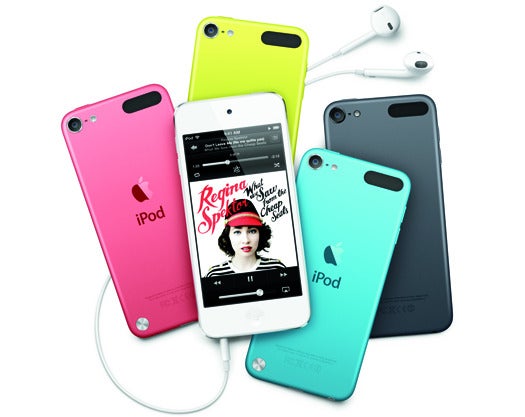 What’s Good: The new hardware is great. The thing is super thin, and slightly more square and less tapered than previous generations. Feels a little bit retro and more substantial. The colors are nice, too, although Apple sent me some kind of horrible chartreuse color, like rancid metallic space-mustard. Don’t get that one! The new, longer screen still has that stellar resolution pixel density, clarity, and color that the modern iPod Touch and iPhones have. It’s super responsive, and I was pleased to find that even with my tiny hands and bad attitude, I have no trouble reaching the top of the screen and yanking down the notifications bar.

The app selection is of course top-notch. There’s no major app that’s not available for iOS. And camera apps, thanks to the new, upgraded sensor, are much more useful. The camera is still not quite as good as the iPhone 5 (or even the iPhone 4S), but it’s plenty good enough for Instagram. Sound and video both have tons of options, from Rdio, Spotify, MOG, and a million podcast apps on the audio side to Netflix, Hulu Plus, and YouTube on the video side. The screen isn’t quite big enough to make it a great video player, especially with the iPad around. But for 20 minutes at a time? Great. The game selection is great, too, from little timewasters to longer and more involved titles.

What’s Bad: iTunes is still a pretty bad media manager–it’s hard to do things manually (“stop syncing! Why are you so insistent on syncing?!”), it’s restrictive on how many computers can be used with each device, it’s slow, it’s bloated, it’s not very good. On the other hand, if you use something like Rdio or Spotify, and you should use something like Rdio or Spotify, that’s much less important, because you’re not reliant on iTunes for music management. Oh, and the earbuds are really, really bad. Like, yes, they fit better than the old ones, but they’re still hard plastic, which makes no sense to me–they don’t seal off the ear canal so tons of outside noise gets in, and the drivers are pretty low-quality to begin with. As always, when you buy an iPod, throw the headphones out immediately.

It’s kind of expensive, at $300 for 32GB and $400 for 64GB. But it’s hard to know what to even compare it to; there’s the Samsung Galaxy Player 4.2, which CNET rates as pretty good. But iOS’s apps are still way beyond Android’s in terms of fit and finish, and CNET found the Galaxy Player a bit underpowered, which the iPod Touch certainly is not. Also the Galaxy Player is pretty ugly and the iPod Touch is very pretty. You could compare it with the smaller tablets; Google’s Nexus 7, our favorite 7-inch tablet, costs $250 for 16GB of storage, but of course it has a much bigger screen, which would make it better for any kind of video, ebooks, and web browsing. The Nexus isn’t pocketable though, so whether those are competing products depends mostly on what you’ll be doing with them. It’s also worth noting that Apple will probably announce a new, smaller iPad in about a week, though I kind of doubt anyone is really choosing between an iPod Touch and an iPad.

Otherwise I don’t honestly have any complaints with the Touch–it works really well, looks great, does everything you’d expect it to.

Product: Apple iPod Touch (2012)
Category: Portable media player
Price: $299 (32GB) or $399 (64GB)
Cool bonus: Recessed lanyard peg in the back, fun bright colors
Rating: Probably the best portable media player ever made, not that that means much these days

What’s Good: Tiny! Super super small, while still having the biggest screen of any iPod Nano ever. Has Bluetooth, for the first time, which is great for wireless headphones (useful while running) or connecting to a little speaker like a Jambox. Has Nike+ built in for tracking your steps and timing your runs and things like that. Plays videos. Now it has a “home” button, just like its big brothers, which I like for clarity’s sake–the previous generation Nano forced you to press and hold the center of the screen, which was not very intuitive. On the side there’s a play/pause button in between the volume up and volume down buttons–good for no-look navigation, when the iPod’s in your pocket or whatever. Sound quality is actually not bad considering how tiny the thing is.

What’s Bad: The screen is only big comparatively–it’s still very small, and can be hard to use sometimes. Not a lot of room for album art or track listings or navigational cues like back buttons. The screen also is pretty low-res, compared to the iPod Touch and iPhone–it’s small but not very sharp. Since this doesn’t have Wi-Fi or apps (it looks like it has apps, but it doesn’t), you have to use iTunes a lot–and iTunes is, again, not very good. Screen is definitely too small to watch video. Like, it doesn’t hurt it to have the option, but don’t buy this expecting it to be a real multimedia powerhouse. Earbuds, see above for description of awfulness.

We’ve pretty much abandoned portable media players in the wake of smartphones, so there aren’t a ton of alternatives out there, especially for a $150 16GB player with premium bonuses like video playback, Bluetooth, and a pedometer. But the video playback is not really useful, and given that the most obvious use for the Nano is as a workout device, I think I might actually recommend something a lot cheaper, something that’s almost disposable, something that’ll just blast your tunes at you while you sweat. For that I think SanDisk’s Sansa Clip Zip might be the best option. The 8GB version (which is plenty of space) costs, at time of writing, $57. It has a built-in clip like the old iPod Nano, and it is, surprisingly, well-known in audiophile communities for its excellent sound quality. It doesn’t have Apple’s fantastic unibody aluminum design, but, like, who cares, if you’re using it at the gym?