How to Get Yesterday’s Games on Today’s Mobile Devices

An emulated arcade in your pocket 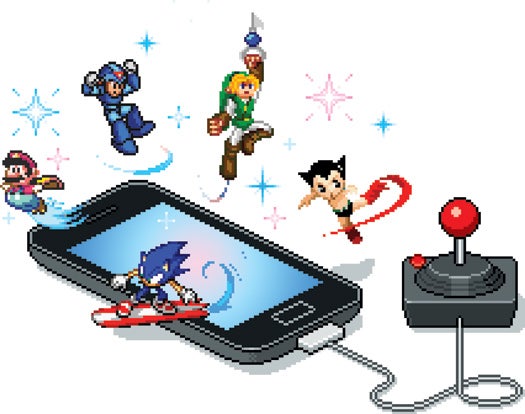 Fans of classic video games have long been able to mimic old game systems on their computers using apps called emulators. Now, smartphones and tablets can also run them. With the right emulator and game files (downloaded separately), virtual versions of the Nintendo Entertainment System, Sega Genesis and other consoles—as well as dozens of vintage arcade titles that can’t be found as standalone downloads—will be available anywhere.

The Android Market has several emulators, but some of the best ones exist in a separate app marketplace called SlideME or as a mobile app. Search for “yongzh” (the name of a software developer) on the site or app to get the emulator files. Apple generally doesn’t allow emulators in the App Store, so you’ll need to jailbreak your phone or tablet. Go to Lifehacker for instructions. Once the device is ready, the icon for a new app store called Cydia will appear on its home screen. Note that some emulators have confusing names [see table below].

The next step is to find game files, called ROMs, and transfer them to the phone or tablet. Start by checking Emuparadise and CoolROM. If these sites don’t have what you’re looking for, Google the title of the game and the word “ROM.”

On Android, ROMs can be stored on an SD card or internal storage. On iOS, many emulators have an integrated Web browser for downloading ROMs. For others, connect the iOS device to a computer and transfer them manually. An application such as iExplorer, (free) will let you access your device’s file system and copy ROMs via drag-and-drop. The location to place ROMs varies depending on the emulator, so consult its Help files. Once the games have been transferred, open them in the emulator and start playing.

It’s generally easier to play with an external controller than a touchscreen. Emulators for iOS let users pair (via Bluetooth) a Nintendo Wii Remote or a controller designed for mobile gaming such as the attachable iControlPad ($63). Simply turn on Wii Remote support in the emulator and follow the onscreen prompts to pair the controller. On Android, gamers can download Bluez IME to pair controllers to a phone. The free app tells Android that the controller is an input device and helps set up the buttons.

Note: all of the iPhone apps are available from the Cydia app store–just search for their names. All Android apps can be found through these links on SlideMe.