The first gamer’s edition of the ultimate record book 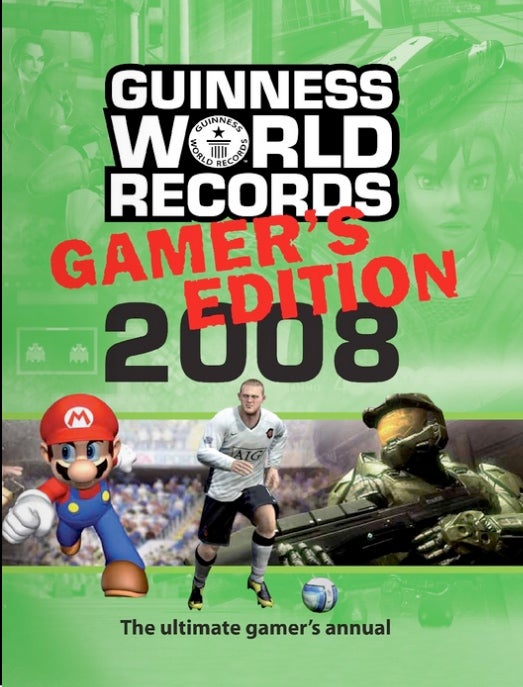 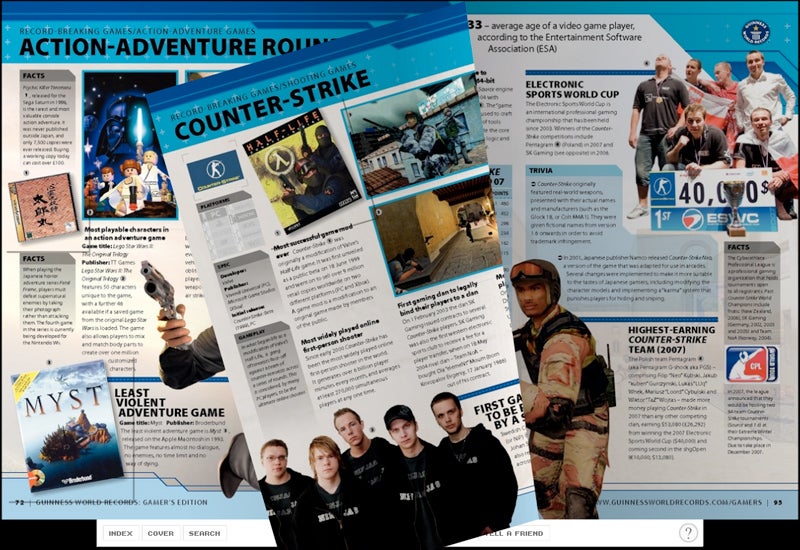 Used to be, when I answered my phone at work, I didn’t know what to expect. A college frat boy wanting to build the world’s largest beer bong. Ashrita Furman, a guy from Brooklyn planning to break the marathon unicycle-riding record for the greater glory of his spiritual leader, Sri Chinmoy. A woman who had toilet-trained her chameleon. I was the associate American editor for the Guinness Book of World Records, and point man in the U.S. for would-be record-breakers.

So, two decades of gaming coverage later, you can imagine my excitement when I heard that Guinness was publishing the inaugural volume of Guinness World Records: Gamer’s Edition. This is a substantial tome, a large-format, full-color, heavily illustrated 256-page bible of electronically powered amusement. If you care about gaming, something here is going to fascinate you.

Know who developed the first rumble-equipped controller, or wireless controller? Nintendo (N64, 1996) and Nintendo (GameCube, 2001). The first fighting game to use combos (moves requiring several buttons hit in sequence)? Street Fighter II, from Capcom. The biggest LAN party ever? It was held in Jönköping, Sweden, in November 2004, when 9,184 people on 8,521 machines tackled Counter-Strike simultaneously. What’s the best-selling game of all time? Super Mario Bros., with more than 40 million sold (it was bundled with the NES in 1985, which boosted the game’s total). The longest of Metal Gear‘s interminable cut scenes? The 15-minute, 17-second sequence in Metal Gear Solid when Snake destroys Metal Gear Rex.

The first game that used motion capture to create accurate movement? Prince of Persia (1989): designer/programmer Jordan Mechner filmed his brother performing acrobatic moves and then traced over each frame. Which console is the most energy-efficient? It’s the Wii, hands down (18.4 watts versus 186.5 for Xbox 360 and 199.7 for PS3). Sonic the Hedgehog‘s original name? Mr. Needlemouse. The first in-game pizza-delivery system? That honor goes to EverQuest II (2005), which let you connect to the Pizza Hut online ordering system by typing “/pizza.”

The “Most Bones Broken by a Sim Game” record listed in the book goes to an arcade machine called Arm Spirit (2007), which apparently resulted in three real-life broken arms. The first arcade machine with in-game ads? Atari’s Pole Position, a 1983 racing game. And the record for the highest production budget ever goes to Shenmue (“I’m looking for some sailors”), the Dreamcast title that cost a reported $70 million in 1999 dollars (when a million was real money).

Of course, it’s not all skittles and beer in this first edition. For starters, the book was edited in England, which leads to odd naming problems for American readers (Sega’s Genesis console is called by its European name, the Mega Drive, for example). There’s an eight-page section called “2007 Chart” which, I’m guessing, is the U.K. sales chart, though it’s never specified (I can’t imagine that Colin McCrae: Dirt was the 14th best-selling title in 2007 anywhere else). There are lots of U.K. records, and references to the BAFTA awards (Britain’s equivalent to the Oscars). Yawn.

Unlike the full-fledged Guinness Book of World Records, the actual records are the least interesting part of the Gamer’s Edition. There’s a section in the back listing high scores, and several speed records for racing through games to completion. These stats don’t begin to replicate the gee-whiz appeal of a guy with freakishly long fingernails, a sandwich that weighs two and a half tons, or the fastest time for a 100-meter barefoot run on ice. The Gamer’s Edition is more interesting for its cool facts and history than its statistics.

And as a history of gaming, there are some inexplicable holes. Where are the PC text games, the glory days of Infocom and_Zork_? Or Roberta Williams and her groundbreaking Sierra games that brought text and graphics together for the first time? Why no mention of the 3DO system, the highest-powered, highest-priced console of the early ’90s, or the unique vector-graphics-based Vectrex console? How about the infamous flop that was the Atari E.T. cartridge? If you’re going to devote two pages to Grand Theft Auto, wouldn’t it make sense to at least mention the original version of the game? Scottish developers created this driving shooter with a unique top-down aerial view inspired by the helicopter coverage of O.J. Simpson’s white Bronco chase.

Sure, it could be better, but Guinness World Records: Gamer’s Edition is still a fun, browsable volume well worth the $20. And if you think your personal achievements are just what’s needed to take this book to the next level, the rules and regs for submitting your record are posted online.