L.A. Noire's carefully reconstructed world owes a huge debt to Robert Spence, who photographed Los Angeles while leaning out of a biplane with a 46-pound camera in the 1920s 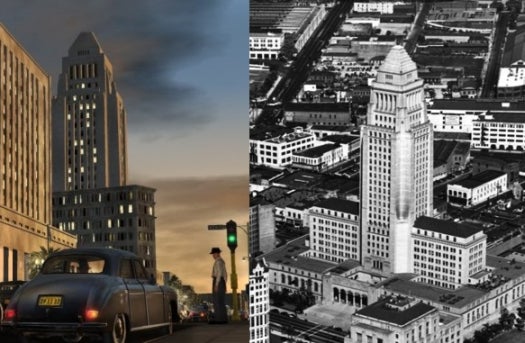 Rockstar’s newest and perhaps most ambitious title, the marvel of technology and storytelling that is L.A. Noire, uses incredible face-mapping techniques to craft a startlingly subtle and realistic murder mystery game. But Rockstar’s attention to detail didn’t stop there: The team had decided to create an authentic depiction of the City of Angels in the 1940s, and needed as much data as they could find. Rockstar’s ace in the hole? They relied on the services of a daredevil photographer named Robert Spence, known for documenting Los Angeles while hanging out of a plane’s cockpit with his 46-pound camera.

Since 1997, when players first sped stolen police cars through the bird’s eye canyons of Liberty City in the original Grand Theft Auto, Rockstar Games has constructed bigger, better, and more detailed virtual worlds than any other gaming house. These worlds–from the dusky horizons of Red Dead Redemption to the cocaine-dusted nightclubs of _Grand Theft Auto: Vice City_–have always owed as great a debt to the popular imagination as they have to historical research. They are uncannily skillful recreations of places we know from movies and magazines. They are hyperreal, rather than authentic.

But building a faithful version of 1940s Los Angeles for their newest, L.A. Noire (out today), required more than a mastery of popular culture and a healthy knowledge of James Ellroy. It required Robert Spence. A Los Angeles photographer, Spence was the subject of a recent profile in Air and Space Magazine, and was Rockstar’s secret weapon in re-creating the city.

Click to launch the a side-by-side gallery of Robert Spence’s daredevil photos and the L.A. Noire screenshots they inspired.

Team Bondi, the Australian developer behind L.A. Noire, pored over Spence’s photographs in the UCLA Department of Geography, where they’ve been held since 1971. The pictures gave Team Bondi building locations and conditions, public transportation routes, traffic patterns; the real arterial structure of a city preserved mostly in film and literature. As a result, gamers will be immersed in the most accurate version of 1940s Los Angeles ever created. 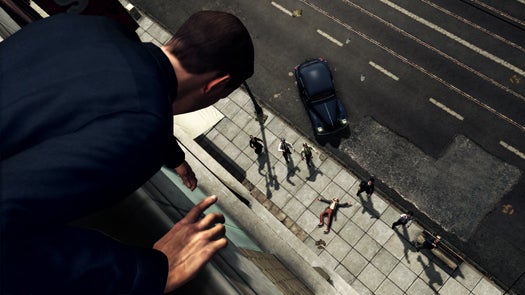 “During the roaring twenties,” writes Air and Space, “Los Angeles bigshots hired Robert Earl Spence to take aerial photographs of their homes, paying $10 a picture.” Spence in turn hired a pilot and an accompanying airplane to complete the task, leaning out from the cockpit with his 46-pound camera (makes you think better of the “bulky by 2011 standards” Nikon D3s, eh?) and shooting at an angle rather than straight down, as most other aerial photography was done at the time.

That was a huge help to Team Bondi–Simon Wood, production designer for Team Bondi, calls the Spence collection a “magical find, as they’re the equivalent of satellite photography” decades before satellite photography would become common. Spence’s photos actually showed Los Angeles as it was to its residents. Says Wood, “They showed us the density of the traffic and the pedestrians, the trolley car routes; they showed us different mosaics and sidewalk patterns that we couldn’t make out from the other street photo reference materials. They showed the different types of rooftops and tar roof styles and air conditioner units.” 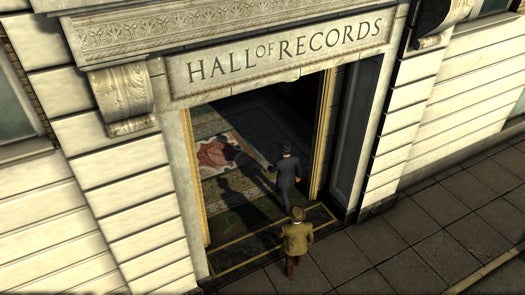 The booming decade also meant a boom in real estate, which meant construction. Everywhere. Team Bondi incorporated details from the construction, captured by Spence, into several missions in L.A. Noire_–without Spence’s photos, Team Bondi never would have understood the now-abandoned construction methods used at the time. They even reproduced in full the now-unrecognizable Pershing Square–Los Angelenos can’t experience, as Wood says, the “curved footpaths, street lamps, the food stall and the fountain” that were integral to the park. But players of _L.A. Noire can wander around in the park to their hearts’ content.

The Spence Collection held some surprises for Team Bondi, as versed as they were becoming in 1940s Los Angeles. “The most striking thing,” says Wood, “were the oil wells! There was one on almost every corner, it was crazy! Reading about the mini-wells/nodding donkeys [the above-ground part of one type of oil well] is one thing, but actually seeing them in people’s backyards was incredible.” These photographs gave the developers and artists a more personal look at what living in Los Angeles at that time was really like, especially as the Spence Collection spans several decades, capturing the evolution of the great sprawling city and its surrounding areas–the filming of Ben Hur, the construction of Dodger Stadium and Disneyland, and the organic evolution of Los Angeles’s peculiar downtown-surrounded-by-independent-communities layout.

We’ve compiled a gallery of some of Spence’s photographs, courtesy of UCLA. They capture a Los Angeles long gone, but one that gamers are now able to experience. There’s even a black-and-white mode in the game, to really get that film noir feel–and get that much closer to these amazing source photographs. Take a closer look here. 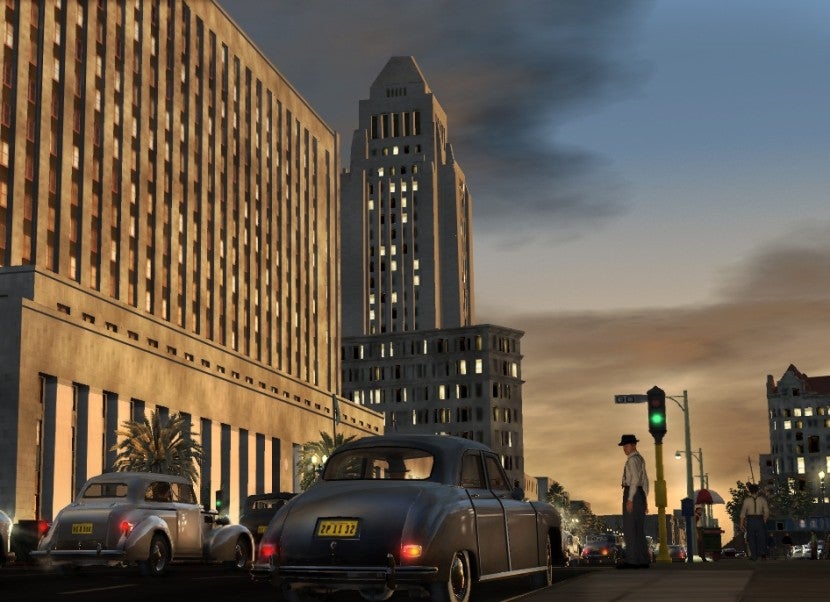 As a city employee, Cole Phelps–the protagonist of the story and the character the player controls–spends a lot of time in City Hall. 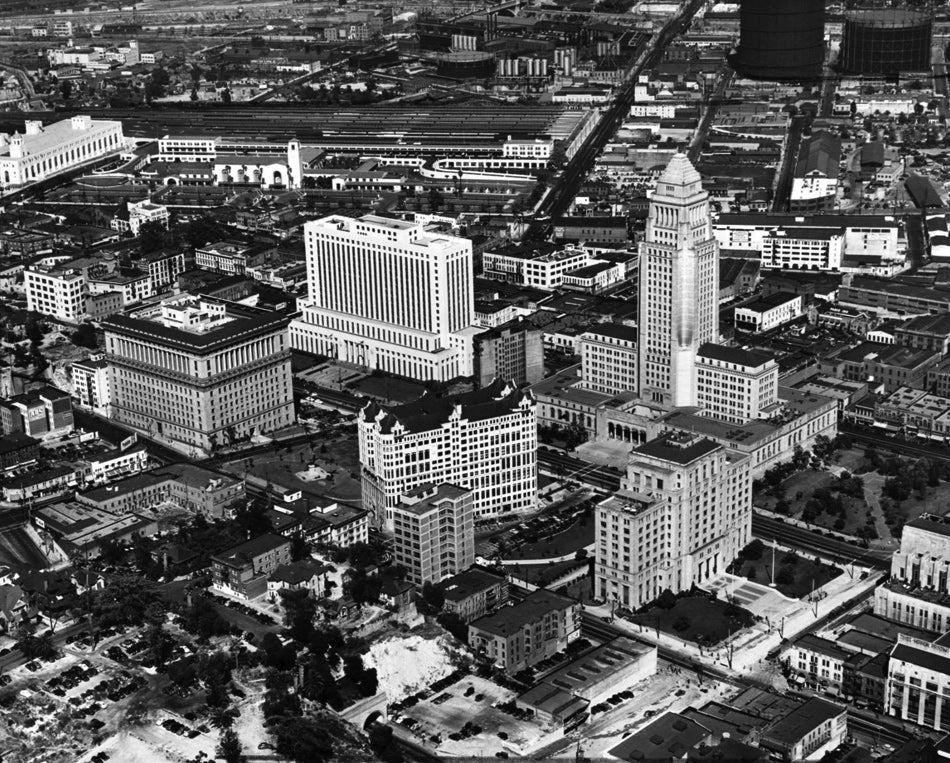 Here’s Robert Spence’s photo of City Hall, taken in May 1940. 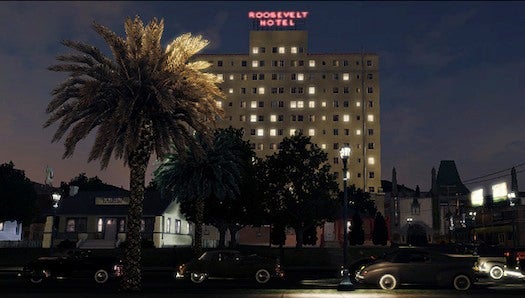 The Roosevelt Hotel in Hollywood, perhaps Los Angeles’s most famous hotel, was the site of the first Academy Awards in 1929, has been featured in countless film and TV set in L.A., and is allegedly haunted by Marilyn Monroe’s ghost. It’s one of the city’s most iconic landmarks, so Rockstar had to get it perfectly. 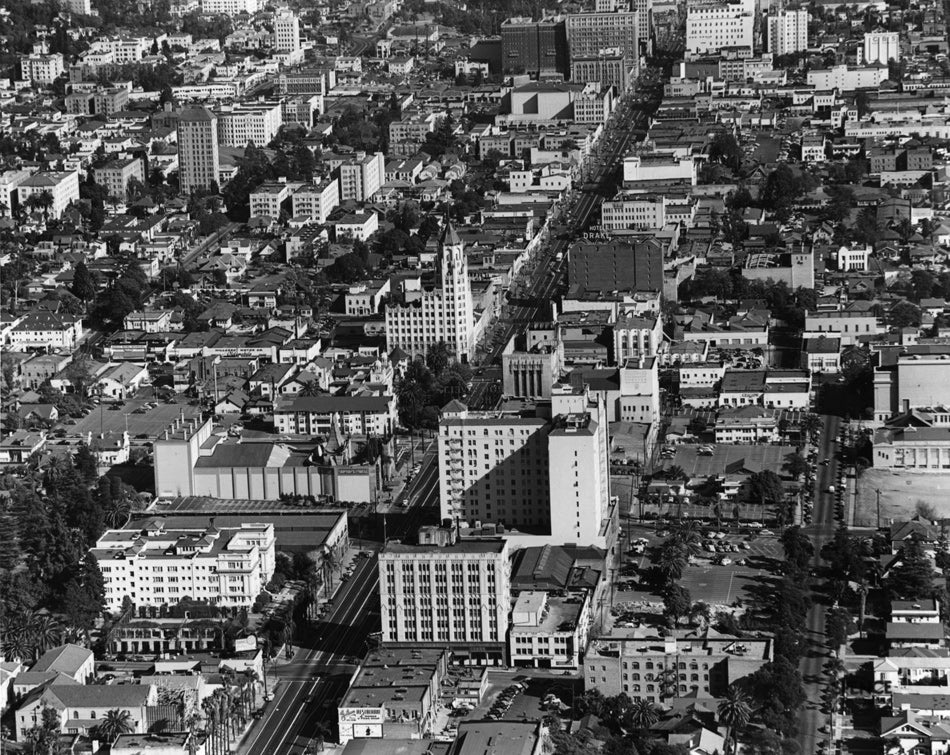 The Roosevelt Hotel is the big T-shaped building in the lower center of this photo, just across from Mann’s Chinese Theater. Spence took this photo in November of 1948. 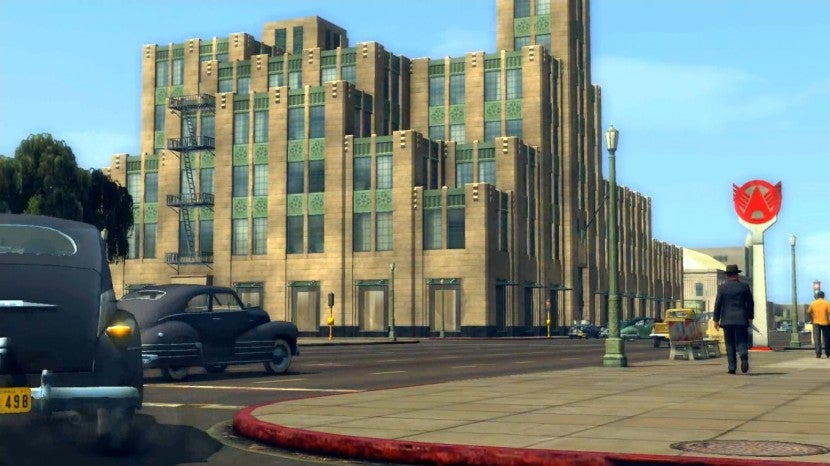 The Bullocks Wilshire department store in the Wilshire neighborhood of Los Angeles has all the angular charm of mid-century L.A.–which isn’t to say you won’t have to solve some kind of gruesome crime there. 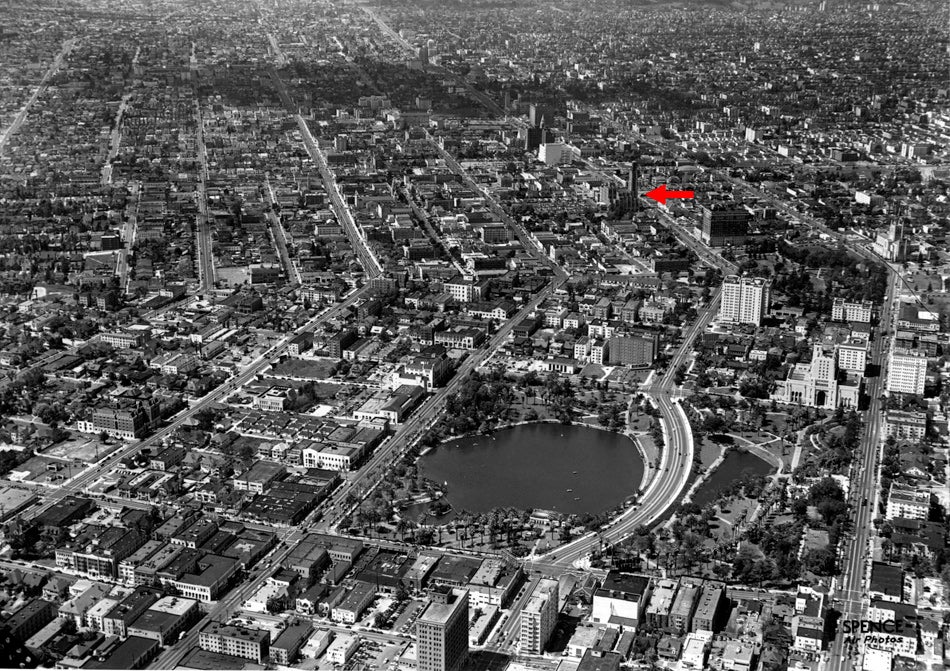 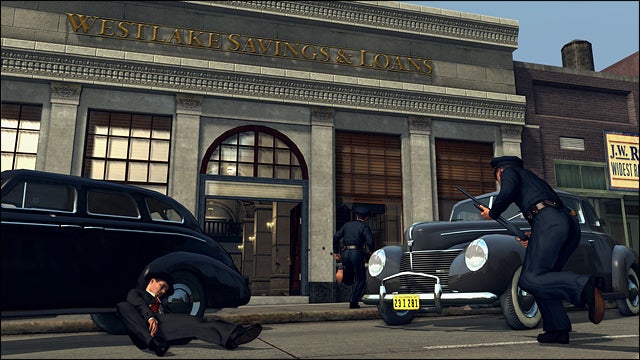 Westlake Savings and Loans, a thriving bank in the Westlake district of Los Angeles…is being held up. The bank no longer exists in that location, so Rockstar and Team Bondi had to rely on Spence’s photographs to see, for example, where a police car might park in that neighborhood. 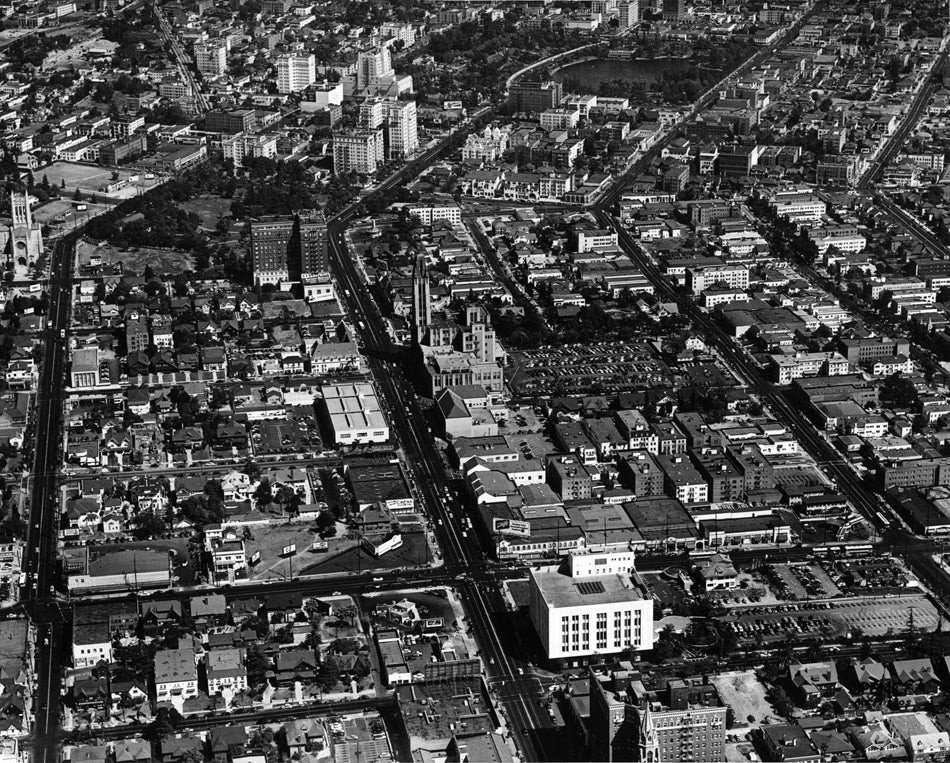 We’re not exactly sure where the Westlake Savings and Loan bank is in this 1948 photo of the Westlake district–the bank doesn’t exist anymore, and this is actually a section of a much larger photo of a huge area of Los Angeles. But Team Bondi still used photos like this to help them understand the subtleties of 1940s L.A., from traffic patterns to the layouts of parking lots. 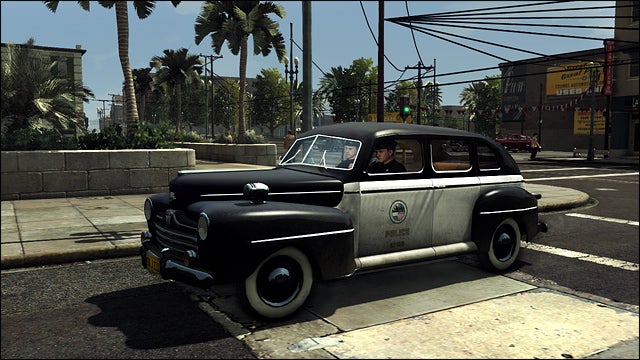 Even if Rockstar and Team Bondi weren’t methodically re-creating every building in Los Angeles, they made sure to scour individual photos from the Spence collection for details. What did a road under construction look like, as in this screenshot? What about power lines? 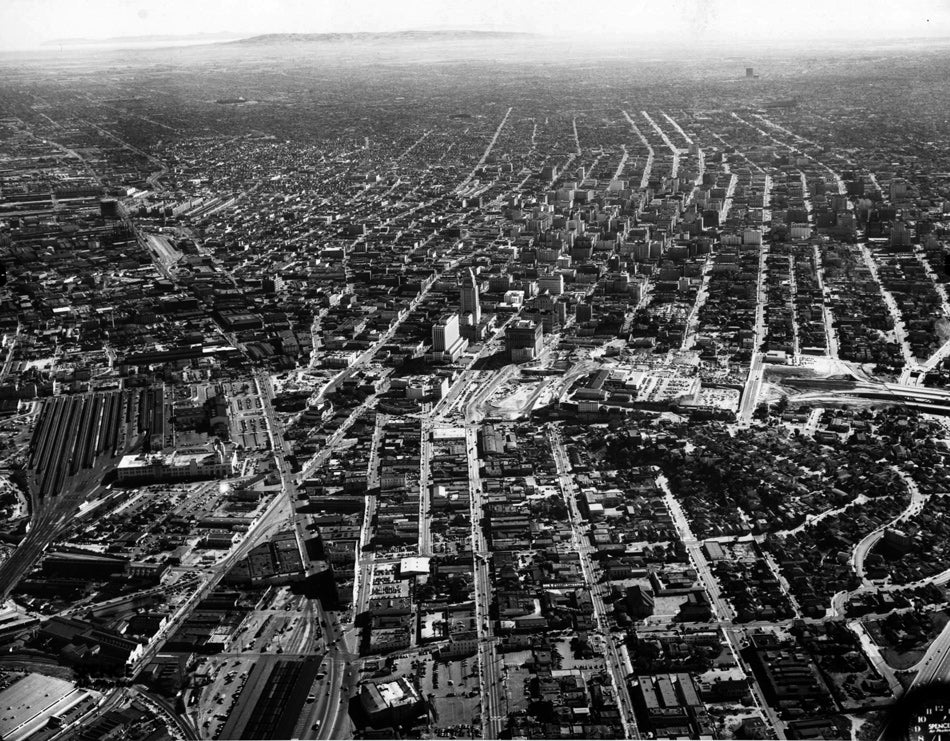 Ah, Los Angeles. This photo of downtown L.A. seems to stretch out to the horizon, incorporating all the oddness of the city, from the cluster of skyscrapers (by 1950 standards, when this photo was taken–by today’s standards, these would be unremarkably-sized, even small, buildings) to the endless sprawl of connected towns. Here you can see the vast swathes of the city that were under pretty much constant construction in the 1940s–construction was so prominent in that decade that Rockstar and Team Bondi even set a few missions in construction zones.
Gaming
Photography