Nintendo Brings Back the Original NES For Just $60

A fun way to relive your days of being terrible at video games. 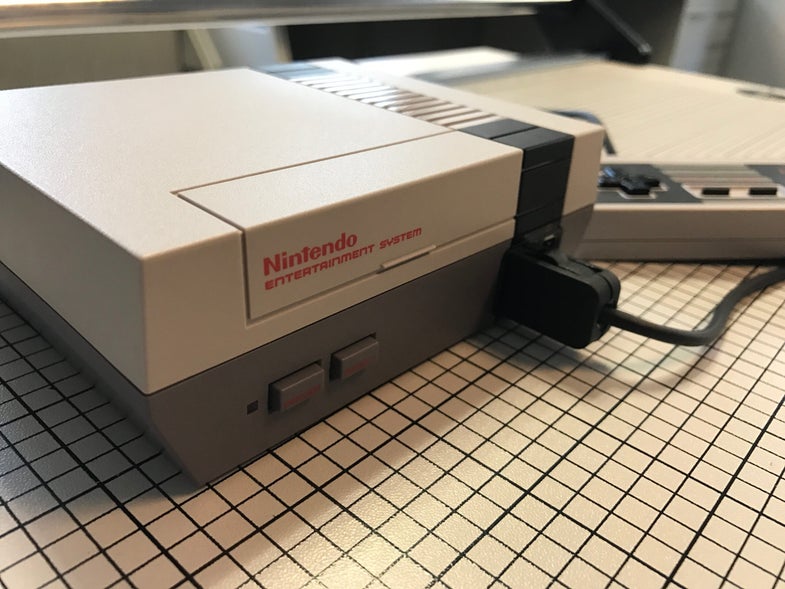 Lately it hasn’t been easy to be a fan of Nintendo consoles. The Wii U’s questionable tablet-looking controller and lack of support from third-party game makers made it—as even the creator of Mario and Zelda will admit—something of a failure.

The company is hitting the reset button by taking its latest console off store shelves and gearing up for the launch of the Nintendo Switch in March. Meanwhile, to keep loyalists intrigued, Nintendo is re-releasing its first-ever game console, the original NES. And it’s damn awesome.

The NES Classic Edition is a remake of the 1985 original. This one is half the weight (so light it feels fake), and so compact grown-ups could easily palm it, throw it in a backpack, and cart it and two controllers to a friend’s place.

The unit sports Power and Reset buttons like the original, though now the reset button, which used to start over the game, takes players to the device’s home screen. Next to these are two controller ports. Toward the back of the NES Classic Edition gamers can find an HDMI port to output video to most modern televisions and a micro-USB port to send power to the device.

Interestingly, Nintendo has chosen to go with a standard charging port, which is unlike the ports on the back of the Wii U Gamepad or Nintendo 3DS. This means, thankfully, that you probably have cables lying around that can power Nintendo’s retro console. You could also power the console with a portable USB battery—no dongles required.

Most, if not all, of your favorite games from the ’80s have made it over. Super Mario Bros., Kirby, Mega Man, Final Fantasy, Donkey Kong, Zelda and more all have titles on the Classic Edition console, as well as titles that we haven’t seen much from since their NES releases, like Excitebike and Mike Tyson’s Punch Out. In all there are 30 games available, and no way to buy more vintage titles from Nintendo’s eShop.

Playing the NES Classic Edition feels like just like playing a game from the past—for better or worse. Throw the NES in CRT mode and you’ll even get the old-school television effect. You’re quickly reminded how uncomfortable controllers were, and how much you needed to use start. There are no auto saves, and some games don’t have saving at all. Instead, users create a password to let the game know just where you ended.

To help make up for this, the NES Classic Edition implements a feature used by every modern video game emulator (those less-than-legal apps that let you play NES and other old games on your computer or phone). Nintendo lets you suspend gameplay, so wherever you are in a game you can freeze the state to one of five save slots on the home screen. At an especially hard part in Mega Man 2 right before Cut Man? Save in the middle of the level, even if Mega Man’s makers Capcom doesn’t want you to. Some may consider the practice cheating, honestly, games used to be freaking hard. Be honest: we all know the idea of finite lives is meant to suck up quarters at the arcade—it just doesn’t make sense when I’m casually playing at home.

Nothing about the NES Classic Edition is wireless, so you have to sit right in front of the TV to play or change the game. The cord to the NES controller is short, so while you can (barely) kick back, you’ll likely witness the NES do its best tightrope impression. But it doesn’t end at short cords. As usual with Nintendo, the controller situation is annoying.

Nintendo’s most recent full console, the Wii U, has a controller problem. While they work fine, the fact that Nintendo has so many controller options leads to added confusion and extra costs. While the Playstation 4 and Xbox One let you use one controller for all games, the Wii U constantly needs to specify which controllers work with which games. And no one controller works with every Wii U game. The NES Classic Edition hasn’t inherited all of the Wii U’s problems, but Nintendo still could have executed things better for fans who already own a pile of controllers.

As someone who owns a Wii U, my ownership of the Wii U Gamepad, a Wii U Pro Controller, and three Wii Remotes was not enough to make up for the fact that the NES Classic Edition only ships with one controller. Luckily, the console works with the Wii Classic Controller and the Wii U Classic Controller Pro, or third-party-made controllers like this wireless one from Nyko. Extra controllers are cheap (about $10), but oblivious shoppers may find it frustrating that when they get home to find they’ll only be able to play 1P games until they can trek back out to the store.

In a perfect world, the new NES would work with any of the new Nintendo controllers with two action buttons and a directional pad (i.e.: all of their controllers). Perhaps one day.

Price Makes This A No-Brainer

Dumb controller decisions aside, the price of the NES 2.0 makes the decision of buying one easy. A very compact, novelty console—plus 30 games—for $60 is a steal. If you already have a Wii U,Wii or 3DS, buying NES games that can be played on your system can be had at $5 each. That’s convenient if you want to play a one-off vintage game, but still doesn’t beat games at $2 a pop and the ability to throw the console in a bag and head to a friend’s place. If you don’t like the new NES, it’s most likely because you hate fun.

Nintendo is known for new versions of their classic titles as much as they are for re-introducing old games on newer hardware. But the idea of re-releasing the whole damn console is a kind of genius way to tide fans over (and keep profits strong) until the Nintendo Switch comes in 2017. Not only is the NES an obvious quick purchase, Nintendo can continue to print more money by re-launching their other legacy consoles. Hopefully by 2018, the N64 Classic Edition will support all of Nintendo’s modern controllers and the ability to add to the built-in titles. Until then, in 2016, the NES Classic Edition remains a great way to stock up on Nintendo’s retro games.