Nintendo ditches glasses in the first major gadget with a glasses-free 3-D display. Find out how it plays in our test 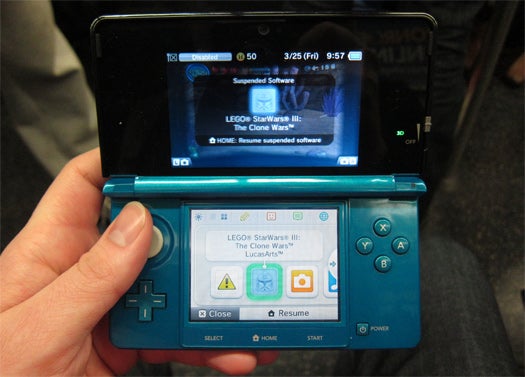 The latest version of Nintendo’s wildly, globally popular DS handheld gaming system (which goes on sale this weekend in the US) is an exciting gadget. It’s the first major mainstream launch of a glasses-free 3-D display, something that bodes well for the future of the extra-dimensional entertainment world currently being pursued at full throttle by multiple industries. Is glasses-free 3-D gaming for real? I’ve been playing for the last week to find out.

You may already have seen our initial impressions and my general thoughts on 3-D gaming here, and after a week with the 3DS, I’m still sold. Gaming in 3-D is great fun, when it works. Which it does very consistently on the 3DS.

The aforementioned glasses-free display is the big one: it employs a parallax-barrier LCD (which we tore open to show you How It Works here). What’s neat about the LCD parallax barrier is that the affect can be fine-tuned with a slider, ranging from a crystal-clear 2-D image all the way to full 3-D.

When side by side with the previous generation DSi, there are several other changes: aside from being in 3-D, the screen is also larger at 3.5 inches and has a higher resolution at 400 x 240 pixels (800 x 240 if you count the discrete images for each eye, up from the DSi’s 3-inch, 256 x 192 pixel display); a slightly beefier case (just over two millimeters thicker and 16 grams heavier); and 2 GB of internal storage in addition to an SD card slot (it comes with a 2GB card in the box, for 4GB total). There’s a 3-D camera on the back plus an additional front-facing single-lens camera for self-portraits; on the outside, an analog thumbstick joins the traditional D-pad on the left side of the controls; and, rounding out the insides, a gyroscope for orientation sensing has been added, as well as a more powerful processor and increased RAM.

Gaming in 3-D: I will say it again: video games are the most natural use for 3-D screens (my thoughts on why are here). On the 3DS the 3-D effect is, for me, very well implemented. There is a definite sweet spot, which lives around 14-16 inches from your eyeballs when held straight-on, and if you venture too far out of it, the screen can be blurred (interestingly, there are sweetspots to the left and right as well, for friends looking over your shoulder). But after a very brief adjustment, I found it easy to stay in the zone and keep the 3-D view consistent.

That said, some friends who played had a harder time adjusting initially. It’s probably smart to get some playtime before purchasing just to make sure your eyes and the 3DS get along.

The basics: The 3DS’s system software, like most everything else Nintendo, is beautifully designed, interface wise. Lots of big rounded corners, sans-serif fonts, pleasing color schemes and cute icons–I love it. It also multitasks rather elegantly, allowing you to drop out of any game you’re running to quickly change the display brightness, take a photo with the camera, jot a note, check notifications or friend status, etc, all while keeping your game’s state preserved.

Plenty to do: In addition to games, there’s lots of fun to be had with the pre-loaded software. The Wii’s customizable Mii avatars are here, complete with a new feature to auto-create Miis based on a photograph of your own face. A built-in pedometer tracks your steps and doles out “Play Coins” for every ten you take, which you can use to unlock additional features like more minigames in the AR Games section, etc. I’ve taken 1,160 steps today with my 3DS.

A passive networking mode called StreetPass also exchanges Miis and other data with any other 3DS-toters who may come within range, even when the system is asleep in your pocket or bag. There haven’t been too many 3DS players on the streets of NYC this week, but I’m excited to see how this feature takes shape in the big city once it goes on sale here.

Faces are also applied to Face Raiders, a fun built-in mini game for shooting cartoon balloons of your friends’ faces out of the sky (as viewed by your 3-D camera). And then there are…

AR Games: The easiest way to wow someone with your new 3DS is to plunk one of the included AR Game cards down on a table and play AR Games, a pre-loaded suite of augmented-reality mini games that turn your tabletop (again as viewed by the 3-D camera on the back) into the stage for a dragon hunt, an archery range, a fishing pond and more. It’s pretty magical, and while the replay value is not high, it’s a great way to immediately show off all the capabilities of the machine at once.

Super Street Fighter 4: 3D Edition: The best launch game by far. I’m a Street Fighter fan already, and on the 3DS, this feels like full-blown Street Fighter 4 as it runs on my Xbox 360. The graphics are great, the 3-D effect perfectly implemented (including a new over-the-shoulder fight perspective), and online battles are possible. This is the game I’ve played most.

Battery Life: So bad I’ll say it a few more times: battery life, battery life, battery life. It’s a terrible sign when even the often-inflated ratings provided by the manufacturer are embarrassingly low. Here, it’s just 3-5 hours of 3-D play (compared to 9-14 on the DSi and 15-19 on the DS Lite). In the real world, you can expect to get even less than that sometimes. Having Wi-Fi on is the biggest battery suck–battling online with Street Fighter sapped a 75-percent full battery down to nearly a quarter in just under an hour. You can easily disable Wi-Fi with a dedicated switch on the side, but it’s a shame the Wi-Fi is so inefficient, as it’s necessary to enable cool features like StreetPass.

You can tell Nintendo is painfully aware of this deficiency. A new charging cradle is included in the box (meant to say “look how convenient it is to charge!”) and instead of the 30-40 minutes of low-battery warning via an unblinking LED found on previous DS systems, the 3DS employs two red LEDs that blink angrily when juice is running out. It’s best to heed their warning and save your game, because the time from low-battery indication to auto-shut-down can be just a minute or two.

So if your DS is a particularly friendly companion on long trips, expect to spend a lot of time playing at the lowest display brightness and with Wi-Fi disabled. Or be stuck reading a book after your battery dies.

Varying qualities of 3-D: How effective and tolerable the 3-D effects are seems to vary largely from game to game. Where Super Street Fighter IV almost never makes my eyes uncomfortable, and employs a great sense of depth rather than a constant barrage of objects flying out from the screen, Madden Football is full of jarring perspective changes and graphic elements. Thankfully you can dial back the 3-D effect for these games, but what’s the fun in that? It will be interesting to see how developers maintain quality control in this new variable of game design.

Hardware design: To me, the DS Lite/DSi are some of the more pleasingly designed gadgets I’ve owned. Holding and using one, you get the sense that every superfluous element has been eliminated, and every necessary element has been honed down to its most precise form. And while the 3DS shares a very similar chassis, the details don’t seem quite as locked down to me. The hinge jiggles when open a bit more than my DSi, and the whole thing feels a tad more cheap and plastic-y. A minor quibble.

No Mario! Nintendo hasn’t launched many major consoles without Mario. And even more surprising, beyond our favorite plumber, very few recognizable Nintendo franchises are here at the start (the exception is Pilotwings Resort, which I found to be one of the more eye-straining games when I played it at the system’s U.S. debut event earlier this year, interestingly enough). Games like Lego Star Wars III: Clone Wars show that your typical platform action is a blast in 3-D, so I can’t wait for whatever Nintendo has cooked up for Mario, who is usually saved for its genre- and platform-defining titles.

Overall, the 3DS is a joy to play. For the most part, the glasses-free 3-D “just works” and is a thrilling experience that adds significantly to most games, even when it’s not employed as a major gameplay element. I can’t wait to see what developers (especially Nintendo’s own) do with its capabilities.

That said, the battery life is a huge bummer. If you’re like me, you grow almost afraid to use any gadget with such poor battery longevity; there’s a nagging anxiety in the back of your mind that what you’re doing won’t last, especially if you feel like cranking up the display brightness (where it’s at its prettiest) and using Wi-Fi to get the most out of your gadget. This is an unpleasant feeling.

Nintendo loves to release physically enhanced versions of its portable consoles pretty regularly, so it’s safe to bet that a slimmer 3DS with better battery capacity (plus more efficient components) is on the horizon. That almost certainly won’t happen any earlier than 12 months from now, though, so for the time being, the battery life (and price) will be the price to pay for what is otherwise top-notch portable 3-D gaming.