The Most Incredible Toys of 2012 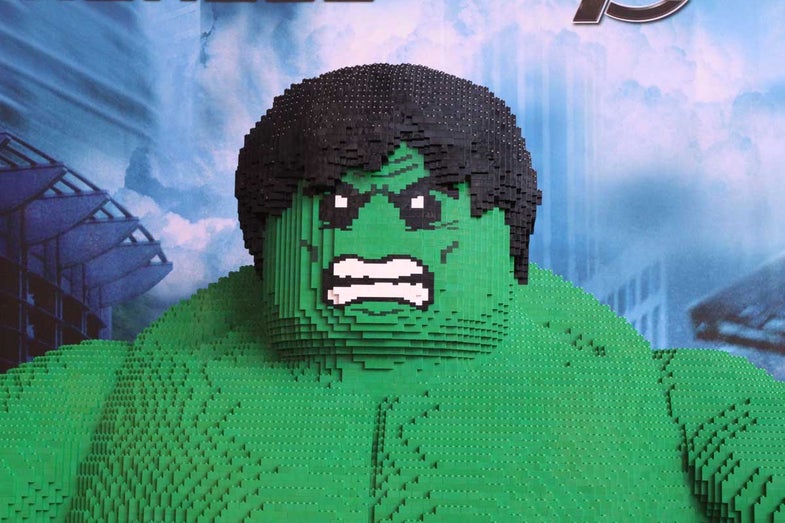 As one commenter for last year’s annual Toy Fair wrap-up pointed out, there was once a time when Lincoln Logs were considered a cutting-edge toy. It was never so clear as it is now, though, that the heyday of the analog toy has long-since passed. 2012 shall be the year of the app-enabled toy.

Half of the playthings that caught our attention require an iOS or Android device to do, well, anything. But, in adapting an already-powerful handset as the brains behind anything from a toy gun to a board game, today’s crop of high-tech toys are able to become more capable and more immersive than anything that’s come before.

That said, special props go to the three toys in our list that require no batteries at all. 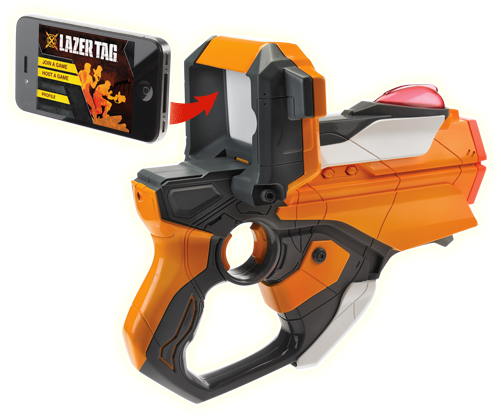 Companies have long-claimed that their lazer tag setups are “real-life videogames”, but Hasbro’s take makes good on that promise better than any other. The brains of each gun is an iPhone or iPod touch (any one with a camera), which acts as the player’s sight and a heads-up display. The on-screen display shows crosshairs, targets, and a radar of opponents’ locations within 250 feet. But what’s even better than a videogame: up to 24 people can play at once. ** $70 (two blasters), $40 (single blaster)
available August** 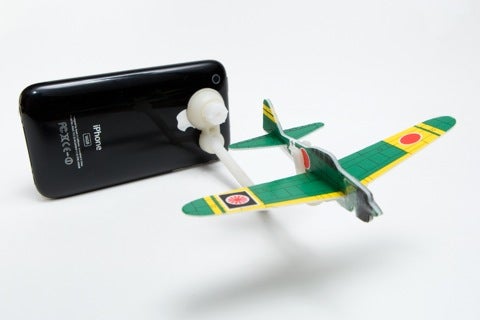 The modern-day equivalent of running around the room with a model plane making engine and firing sounds in WowWee’s Foam Fighters. The three-inch foam airplanes attach to any camera-equipped iDevice on a suction-cup-equipped arm. Players download a free app, which captures a QR code on the plane’s wing to launch into a mission (WWII flights over Europe, the Pacific, and Britain). The app then superimposes a live image of your fighter on top of the battle scene. ** $10
available May** 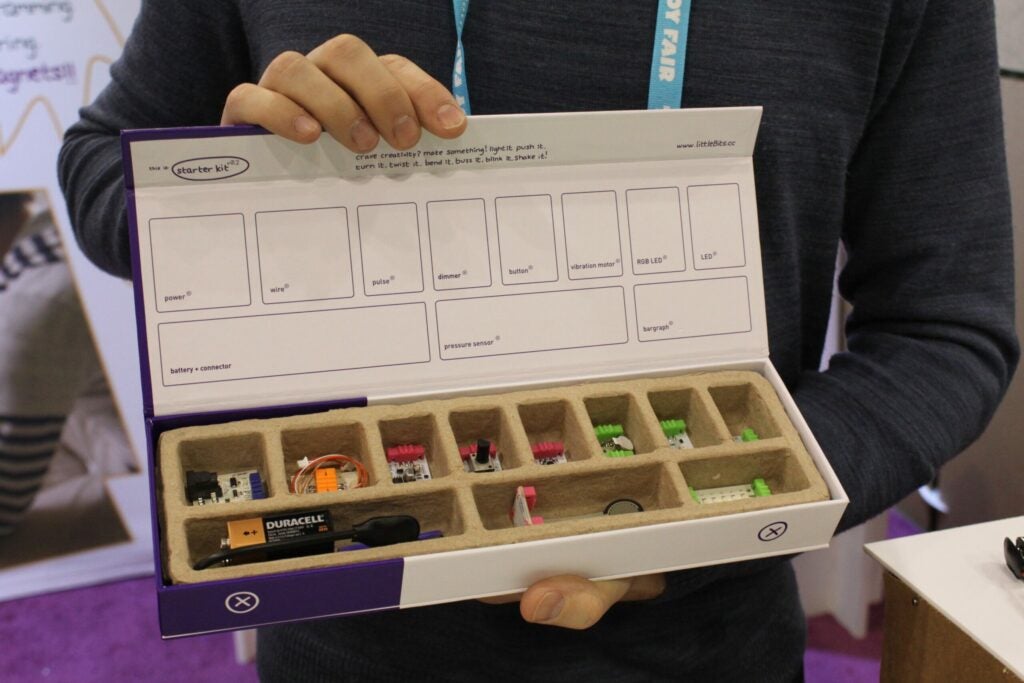 Wanna make your own toy, do ya? The littleBits kit brings LEGO-like simplicity to creating electronic toys. Each littleBit component has a single, preset function — light responsiveness, dimming, proximity sensing, swtiching — and tinkerers can circuit them together to facilitate any task they choose. One demo, for instance, loaded a proximity sensor, battery and bulb into a piggybank; when you insert a coin, the pig’s face lit up. The boards magnetically lock together to create custom circuits. The starter kit comes with 11 pieces, and additional components are available for around $10. Eventually, the company plans to release a wireless (Bluetooth or WiFI) chip, as well as boards that will allow inventors to extend their creations in any direction — components currently only connect side-to-side. ** $80
available now** 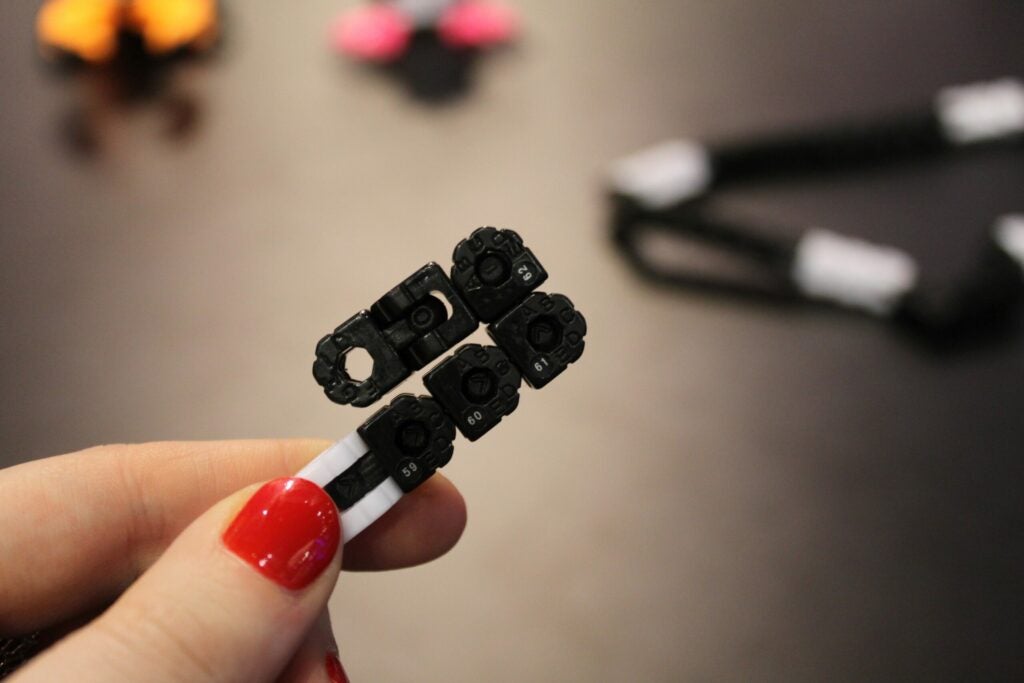 The product of graduate research at MIT, Codee started off as a mockup to help students model and understand DNA sequencing and other microscopic concepts. Now, Codee is a puzzle and sculpture tool. Each Codee strand consists of 64 jointed links labeled with letters and symbols. Provided patterns direct users to rotate each block to a single letter/symbol combination (for example, a code may say 1 + E, 2 > A, and so on). Follow the code to create a model, or monkey around to design your own. ** $8
available Summer** 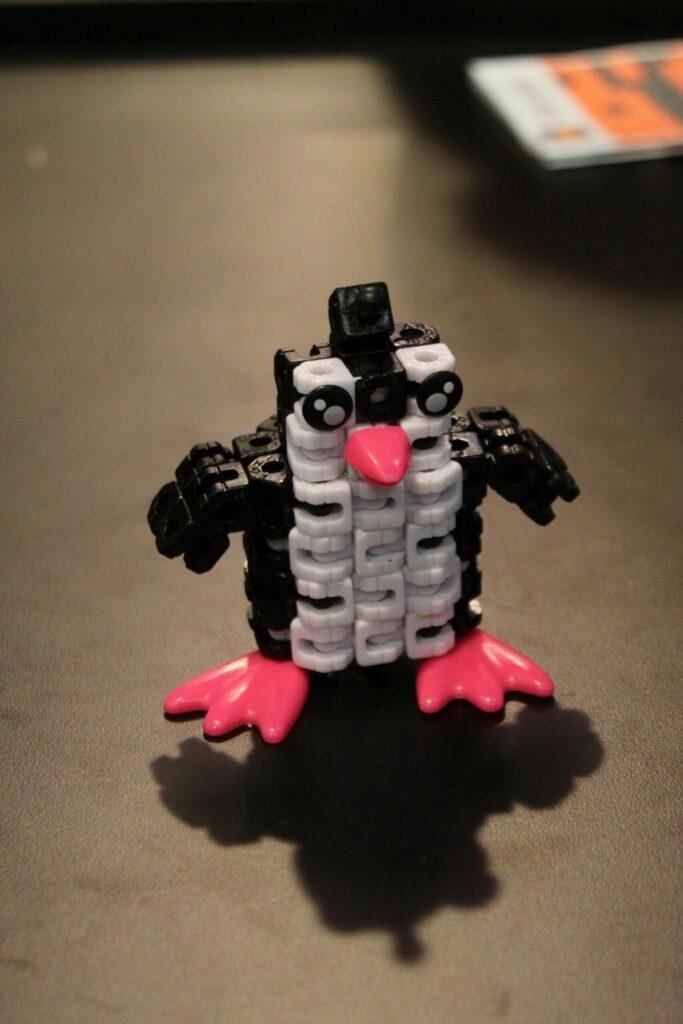 One provided pattern (and a pair of little plastic feet) turn one Codee strand into a freestanding penguin. 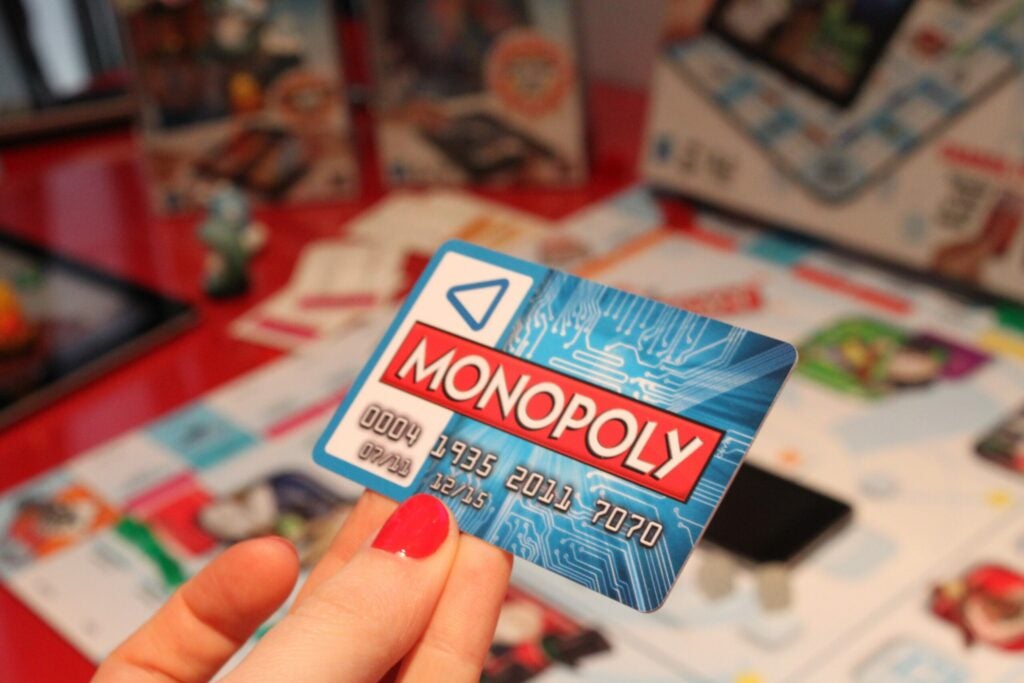 Cheating banker? Not this time. The newest Monopoly iteration uses all digital money. Each player has a faux credit card, and an app tracks their account balance. Make a purchase or pay someone else rent by tapping the back of your card on the iPhone screen. ** $25
available June** 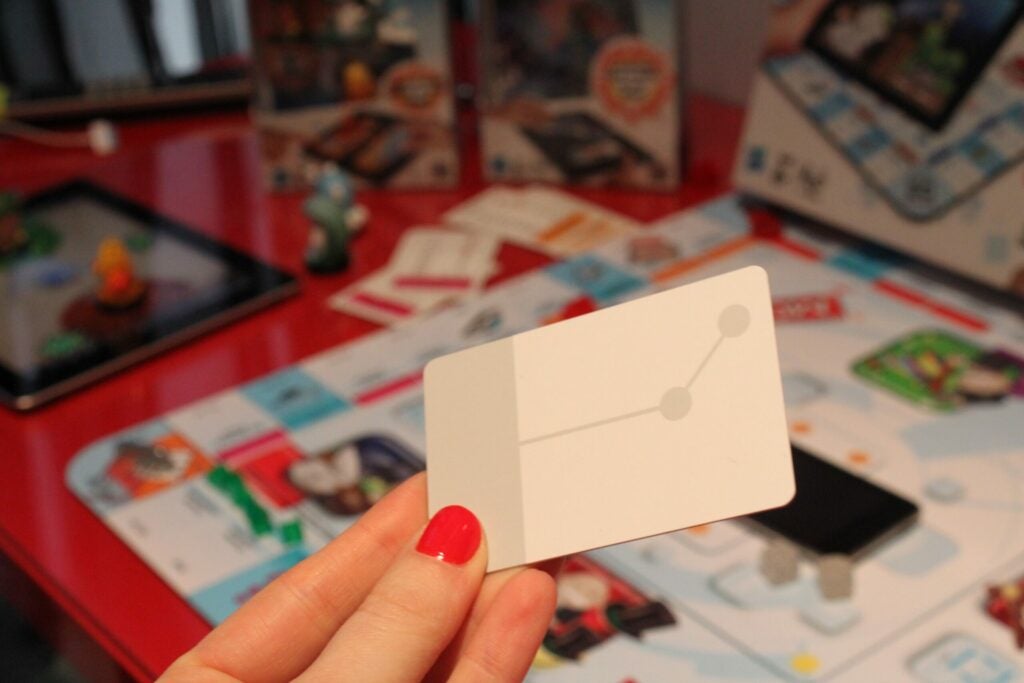 Three conductive ink dots on the rear of the card interact with the capacitive screen to tell the app which player you are, and deduct/add the correct amount to your balance. 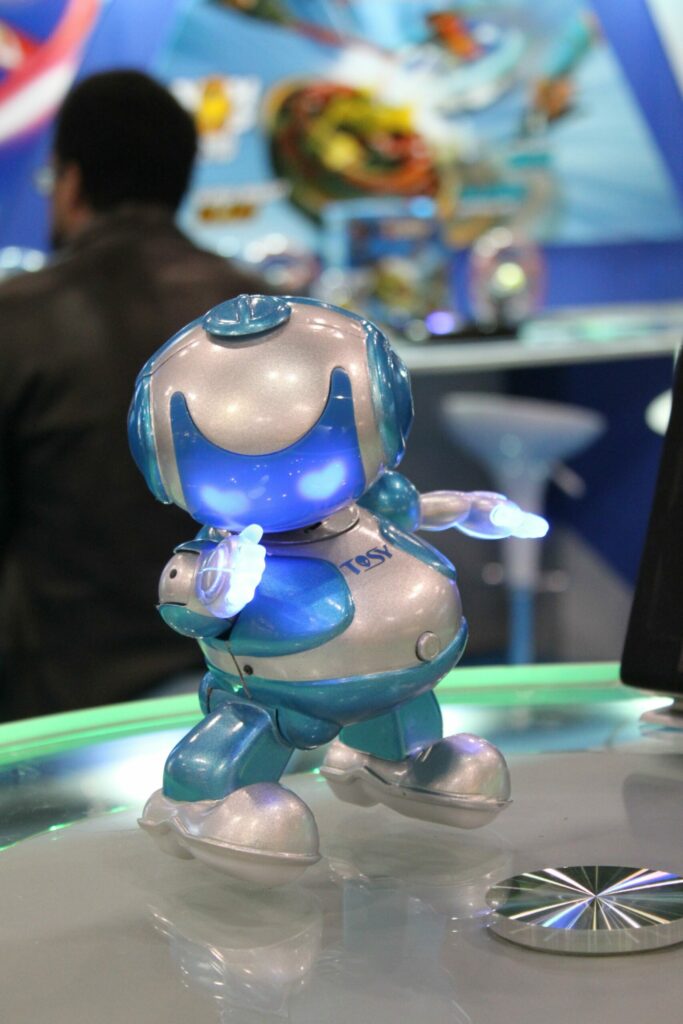 Music-responsive robots aren’t exactly new, but if you want a little more action than some adorable bopping — and it is adorable — the DiscoRobo is your jam. The little metallic blue robot has fully articulating arms and hands, rolling jointed legs, and a rather expressive face and head. Check out all his moves in PopSci.com’s upcoming Robot Dance-Off. ** Price not set
available mid-year** 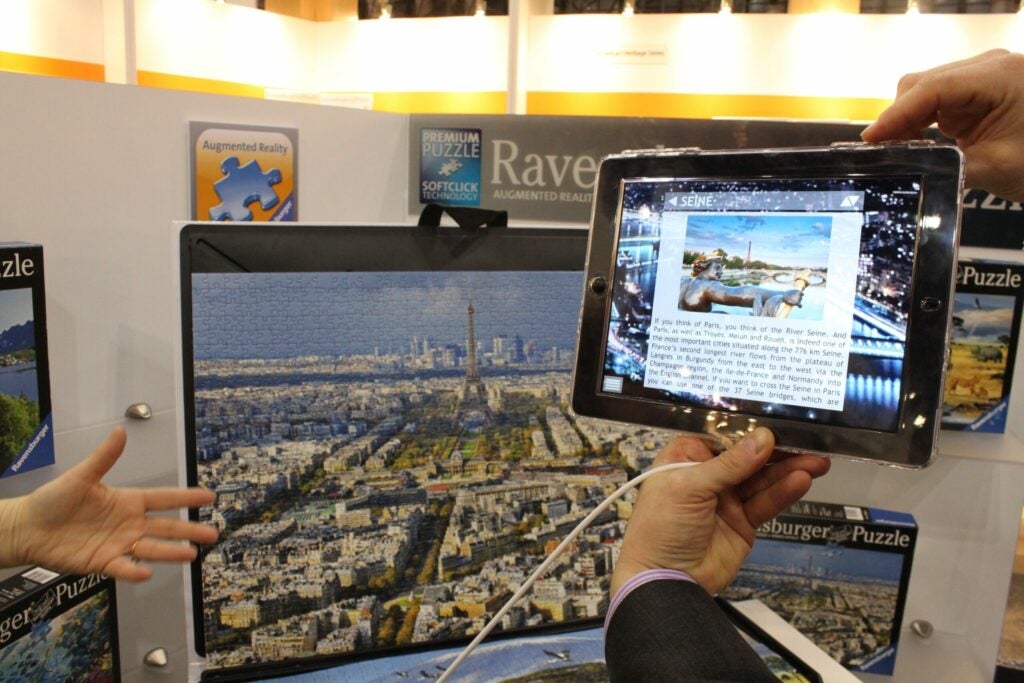 Finally, there’s more to do once you complete a 1,000-piece jigsaw puzzle than tear it apart and reclaim your dining-room table. This year, Ravensburger is releasing a series of augmented-reality puzzles that interact with a free iOS app. Once done, the user holds the device’s camera up to the final image for the app to recognize. Each puzzle activates a different functionality in the app. Paris, for instance, provides viewers with a 360-degree panorama of the city in both day and night with clickable points-of-interest. An under-the-sea image pulls up a find-the-fish game, and a wildlife image cues up video footage. $30
available Fall 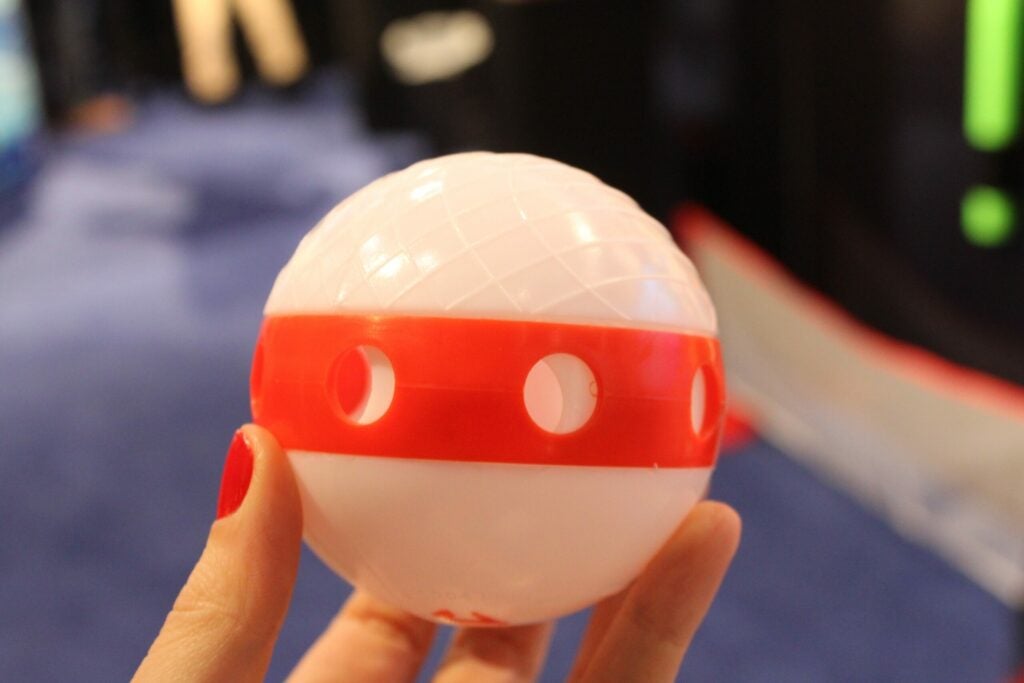 It’s no secret that a wiffle ball’s holes help it break and curve more readily than a solid ball would. The Junk Ball, allows pitchers to adjust the amount of airflow the passes through the sphere. A plastic ring running the circumference of the ball rotates to open and close the holes. With holes all the way open, for instance, the ball will break hard to the right. ** $4
available now** 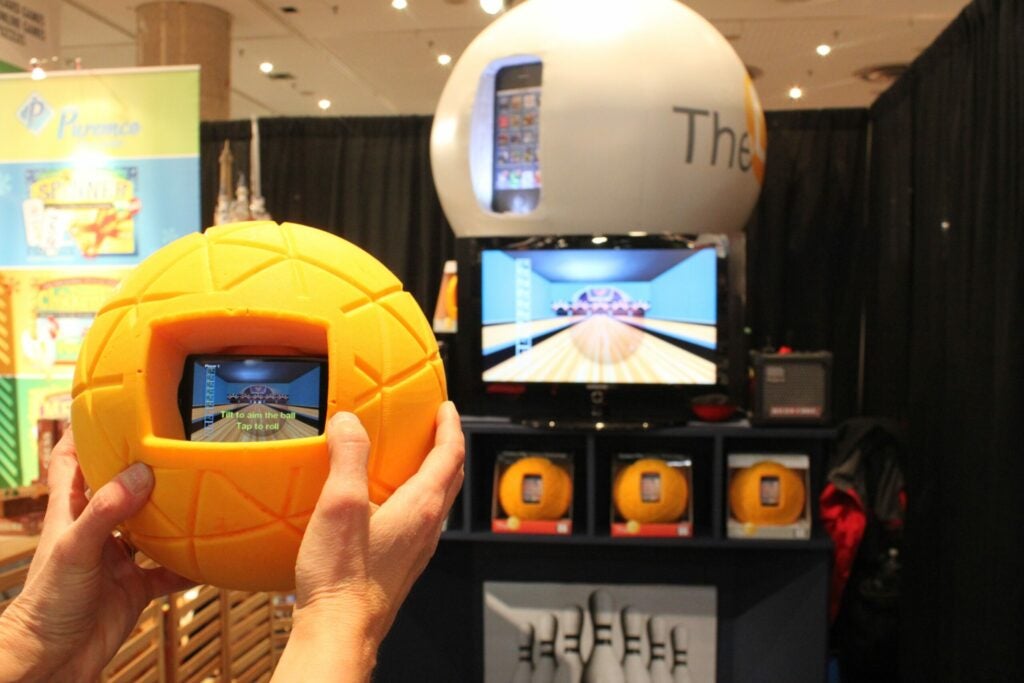 Why, yes, that is an iPhone buried inside that foam kickball. The TheO ball uses an iPhone or Android device’s accelerometer to communicate with a suite of custom apps, the most simple of which is a simple hot-potato pass-and-play game. A more-advanced use turns the orb into a bowling ball. TheO’s bowling app communicates via WiFi to a laptop or smart HDTV; roll the ball at the TV to see your shot careen down the lane. The inventor said the ball — and phone inside — survived a three story drop from the roof of his barn. ** $25 (plus apps from $1.99-$4.99)** 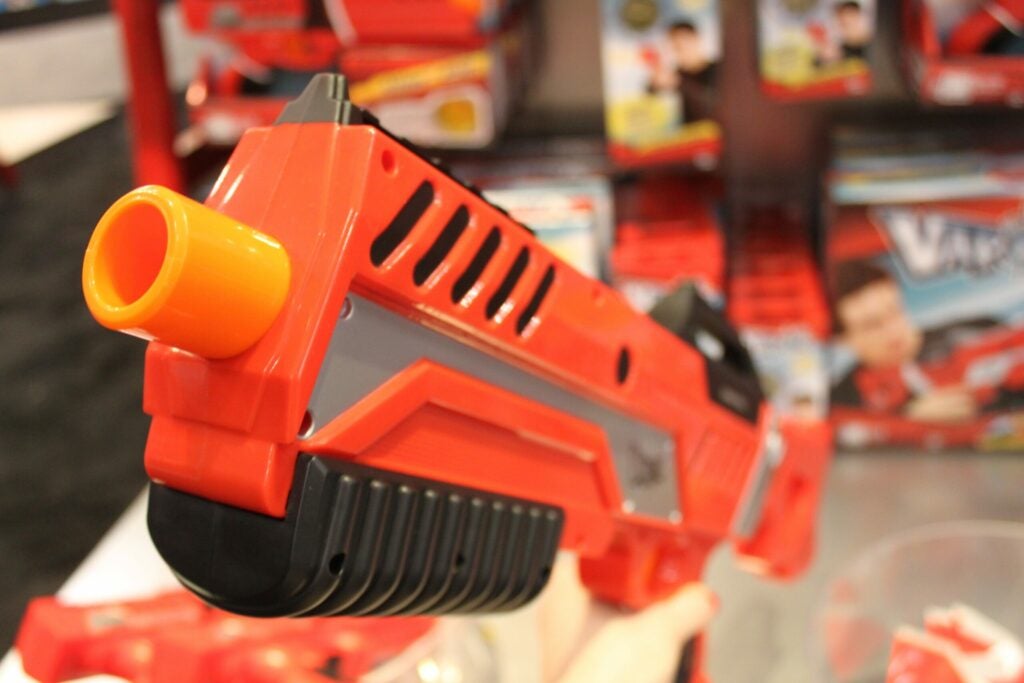 Offering all the satisfaction of paintball without the mess, Razor’s Delto 500 shoots its water-based gel ammo as far as 80 feet. The blaster holds up to 100 rounds of its mysterious ammo (the company played coy about the exact formulation), which explodes on impact and dries quickly and invisibly. ** $25 ($6 for 500-round ammo refills)
available Spring** 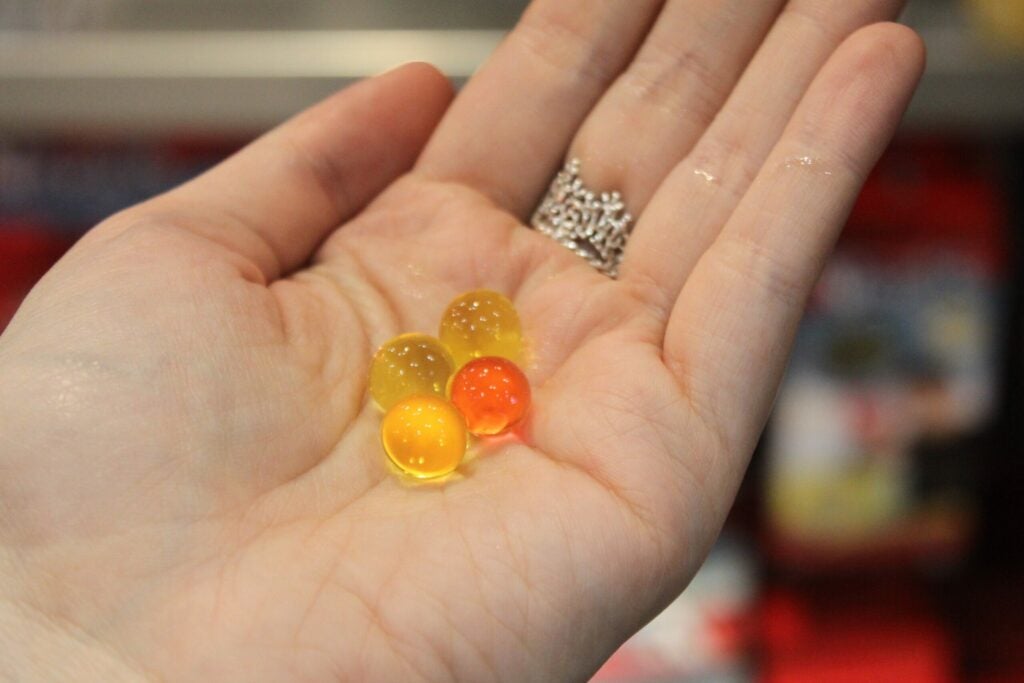