Sprint's new stereoscopic smartphone boasts a 3-D display and camera--but is it worth the (literal) headache? 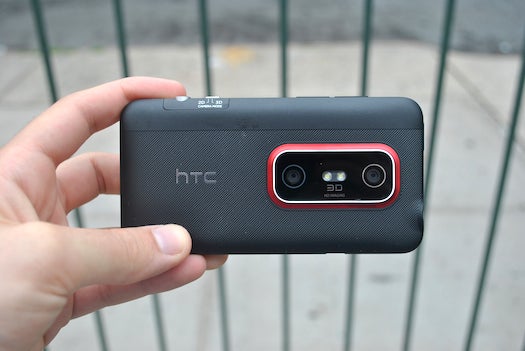 Here you can see the Evo 3D's dual-lensed 3-D camera on the back of the phone, as well as that excellent shutter button. Dan Nosowitz
SHARE

HTC’s Evo line of Android smartphones is big on firsts: The Evo 4G was the first 4G phone in America (by current definitions, at least), and its sequel, the Evo 3D, is the nation’s first to pack a glasses-free stereoscopic 3-D display, like the Nintendo 3DS. It’s actually a very nice phone, but it doesn’t do much to convince us that stereoscopic 3-D is good for anything but gaming.

The Evo 3D is changed in some subtle ways from its predecessor, the Evo 4G. It has a dual-core processor, rather than the Evo 4G’s single-core, along with more memory. The software has been upgraded as well; the Evo 3D has the newest version of HTC’s Android skin, Sense 3.0, laying on top of the newest version of Android, Gingerbread. But the big addition is the 3-D: its screen can display glasses-free stereoscopic 3-D, and its dual-lensed camera (on the rear; it also has a regular 2-D front-facing camera) can take both video and still photography in the third dimension. 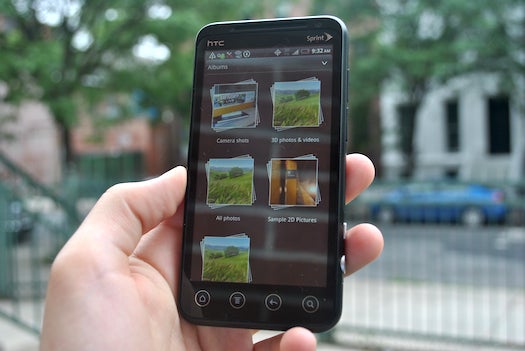 The phone’s face, showing its gallery app. The brick pattern is a reflection, rather than a background image–the phone is pretty reflective in natural sunlight, though actually quite nice–in 2-D–indoors

The phone itself is pretty good! HTC changed the aspect ratio to 16:9, making the phone taller and skinnier than the Evo 4G. I’m not a huge fan of that decision, as it can be tough to reach the upper parts of the giant 4.3-inch screen, especially for those with smaller hands. Aside from that, the design is really nice–much thinner than, say, the HTC Thunderbolt, and with a more interesting look. The textured back and Evo-trademark circle-enclosed buttons are a nice touch. The added horsepower and upgraded version of Android make the phone very snappy to use. Sense 3.0 is kind of overly complicated and showy–expect lots of completely unnecessary animations and a bajillion very-similar widgets–but it does offer some nice features and a sense of cohesiveness that Android sometimes lacks. The lockscreen, which shows the weather and gives you a shortcut into the camera, phone, email, and messaging app, is a good example: It’s pretty, and useful on paper, but it’s not actually any more efficient to use than a simple unlocker.

The included 3-D game, Ultimate Spider-Man: Totaly Mayhem, is pretty fun–about as good as a mid-tier Nintendo 3DS game, which means it’s worth playing. Not to brag, but this further proves our theory that 3-D is at its best in gaming, rather than movies or TV.

Oh, and the camera button is perfect. Other phone makers: Steal this button en masse. It actually feels like a camera’s shutter button, two-stage picture-taking and all. I want it on every phone I buy from now on.

The 3-D is bad. It’s not implemented nearly as much as I expected–the homescreens and all of HTC’s custom apps are in regular 2-D, including HTC’s replacement Twitter, email, calendar, and messaging apps. It’s jarring to turn on a phone with “3-D” in the name and have to dig around in the app list to find something that’s actually in 3-D.

But once you do find the 3-D stuff–there are a few games in 3-D, the Gallery app displays 3-D images, and you can watch movies in 3-D–you might wonder why you even bothered. The effect is noticeably worse than the Nintendo 3DS: images are very shimmery, shifting around if you change your perspective even a tiny amount. The proper viewing angle is far too specific–if you move to the side, up and down, or back and forth, you’ll lose the effect. 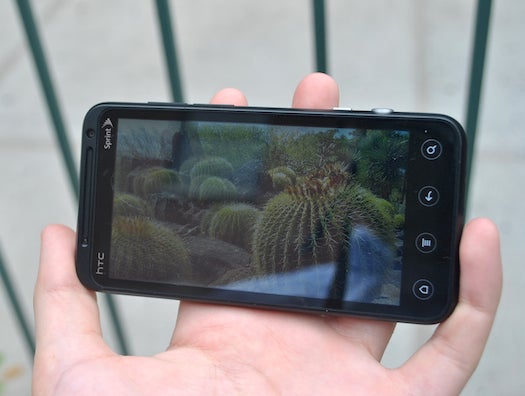 You can’t get too good of a sense of the 3-D feature without using the phone, but you can see how quickly the 3-D photos lose their focus when the phone isn’t at the perfect angle to your eyes

The included 3-D sample photos actually gave me a headache; the effect is the opposite of immersive, since you feel like you’re having to manually adjust your eyeballs to cope with the blurry perspective pranks the phone is playing on you. There’s this moment of switching from 2-D to 3-D while browsing through photos that is legitimately painful, as your eyes struggle to switch their perspective. There’s no way to dial down the effect, like on the Nintendo 3DS–it’s either on or off. Some of the photos we took ended up looking okay, but overall we opted to ignore the 3-D gallery altogether.

$200 with a two-year contract from Sprint

The Evo 3D itself is actually very desirable–if there was an HTC Evo 2D, this phone with the 3-D elements lobotomized, it’d be a worthy followup to its groundbreaking predecessor. And we’re not judging it for using 3-D, which many call a gimmicky technology. We don’t mind gimmicks; actually, we love gimmicks. But we love them when they’re fun, even if the fun is superficial or short-lived. The Evo 3D’s gimmick is bizarre: it feels like you don’t use it often enough, but when you do use it, it’s actively unpleasant. The final verdict? If you’re on Sprint, grab a Nexus S 4G, unless you’re a very specific type of masochist who wants to watch Avatar on a 4.3-inch screen and get a headache while you do it.