This Is My Remote Control

A few weeks ago, a company called VooMote sent me a press kit that included two universal remotes. The first... 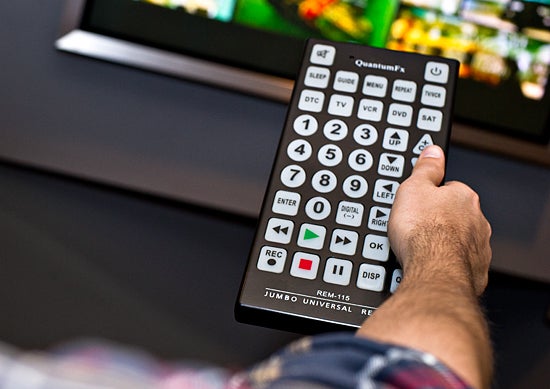 A few weeks ago, a company called VooMote sent me a press kit that included two universal remotes. The first was a VooMote Zapper, a little infrared dongle that turns your iPhone/iPad/iPod Touch into a customizable universal remote. The other was the QuantumFx REM-115, a sled-sized slab of blackish industrial plastic outfitted with buttons big enough to be operated with your forehead. The conceit: “look how far remotes have come!”

But here’s the thing: the QuantumFx REM-115 the remote I actually want to use. The QuantumFx is massive, clumsy, physical, tactile, primitive. And useful.

We called for a new breed of truly futuristic remotes a few weeks ago, and our position still stands: we’re not wowed by gadgets that use trendy technologies because they’re trendy. Touchscreens on remotes immediately qualify, in my book: I’ve never used a touchscreen remote that felt as useful and natural as a regular buttoned remote. A remote needs to be operated without your eyes, because your eyes are looking at the TV. Bobbing your head up and down to see the two screens is almost a step backwards. Simply reproducing a physical remote on a touchscreen doesn’t have enough benefits to make up for the inconvenience of having to unlock a phone, open an app, and find and then tap the channel change button just to change the channel.

There are benefits, of course–the VooMote was much easier to set up than the QuantumFx (not least because the QuantumFx came with no documentation or instructions, leaving me to trawl through misspelled and, in one occasion, oddly racist Yahoo! Answers boards), and it can change its form instantly to whatever you’d like. But those don’t make up in the day to day for the difficulty in actually using a touchscreen remote–mostly, what I’m doing with my remote is basic things, changing the channel or the volume or swapping between inputs or play/pausing or fast-forwarding/rewinding, and that kind of thing is done more easily and quickly with buttons. Eventually, we’re hoping voice control, or even something we haven’t thought of yet, will take the place of the venerable clicker. But for the moment, I use this thing.

It’s the buttons, glorious, quarter-sized buttons, that make the QuantumFx a usable remote. But I can’t ignore that it’s the aesthetics that make the QuantumFx so charming. So much of my gadgetry is slick and modern, from the asymmetrical Boxee Box to my fancy speakers to all of the tablets and ebook readers and portable gaming consoles and smartphones littering my table, there’s something so fun and incongruous about having a giant, unapologetically cumbersome remote to control my space-age electronics. I love that it’s plenty functional enough–more functional than my comparatively charmless circa-2010 LG remote, since it can also change the volume on my stereo–and also resolutely physical. This thing works at least as well and it cheers my critical gadget-reviewer heart whenever I use both hands to pick it up.

In case you’re wondering, the QuantumFx is available for an affordable $8.40 from the kinds of weird online retailers that would sell the silliest, best remote.