Smartphones Will Become the Only Device Hardcore Gamers Need

When Sony, Microsoft or Nintendo introduces a new videogame console, its obsolescence within six years is more or less assumed.... 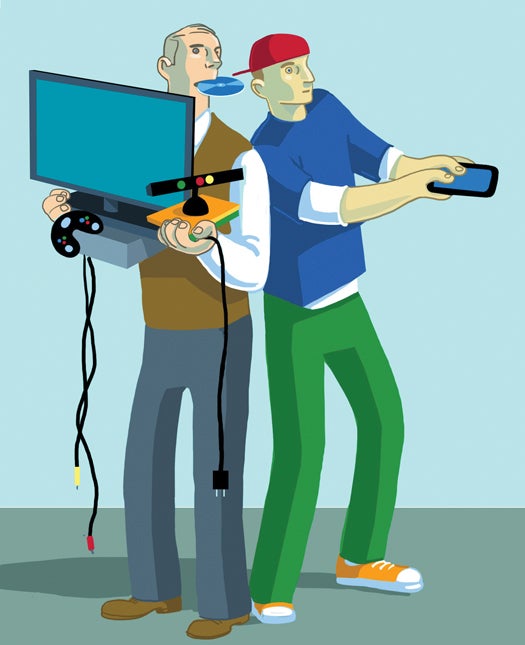 When Sony, Microsoft or Nintendo introduces a new videogame console, its obsolescence within six years is more or less assumed. Nintendo is likely to release the new Wii U later this year, and other console makers are rumored to be working on next-generation systems. But as early adopters line up to experience whatever new high-def graphics those systems may offer, the next-next generation of console is already gaining momentum. The device is the smartphone, and within a decade it could be powerful enough to replace conventional game systems for good.

Mobile gaming began in 1979 when the Milton Bradley Company introduced the Microvision cartridge-based system. Since then, Nintendo, Sega and Sony have released many more portable systems, from the Game Boy to the recent quad-core PlayStation Vita. Although many of these devices were a great success among gamers (to date, Nintendo has sold more than 50 million of its DS systems), they never gained a substantial following among the general public.

Smartphone games are still a far cry from the richly textured and fast-moving console experiences that hard-core gamers love, but that could change rapidly. Today’s fastest phones already have quad-core 1.5-gigahertz processors—a fraction of the horsepower of a PlayStation 3—and others can send full 1080p high-def to a TV over HDMI. Mobile processors are hitting the steep part of the Moore’s Law curve, where power increases sharply with every year. One day soon, a five-ounce phone’s specs could rival those of the current best laptop.

Such a sharp increase in mobile power will most certainly provoke further attrition in the gaming ranks. Android and iOS already claim 58 percent of the portable-gaming market, and console game sales are on the decline. But for smartphones to gain dominance, users will need better ways to access console-level games. Either cloud-based delivery services will license a broader range of titles, or flash memory will improve to the point that a phone can store many console games (at present, one game could consume half a typical phone’s 16 gigabytes of memory).

Once the barriers to access fall, though, the phone will become a dual-purpose game hub. Mobile gamers will probably continue to rely on app-based games—who would want to play Skyrim on a four-inch screen, anyway?—but home gamers will have a dramatically different experience. Rather than firing up an Xbox or PlayStation, they will pair their phones with their TVs and wireless controllers. Discs will become obsolete, shelf space in the home entertainment system will open up, and users will carry a self-contained game system wherever they go.