Fracking fluid is leaking more often than we thought

And that's not great 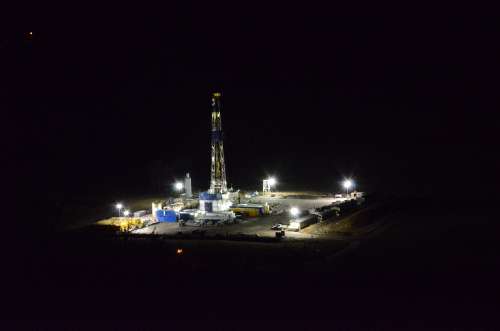 Hydraulic fracture oil and gas wells spill pretty often, according to a recent study in the journal Environmental Science & Technology.

That study, along with a companion paper which appeared in the journal Science of the Total Environment, analyzed spill data and behavior across four states—Colorado, New Mexico, North Dakota and Pennsylvania—with the goal of identifying common causes of spills to help industries improve.

If you feel like you’ve heard this story before, you haven’t. Most studies on hydraulic fracture, or fracking, focus on underground leaks. This study focused exclusively on leaks at the surface, which can harm wildlife—most notably birds and marine creatures—as well as impact drinking water sources. Fracking fluid contains a slurry of chemicals, many of which are known to be dangerous and even more of which are kept secret by the companies that produce them. Many hydraulic fracture sites are located in close proximity to headwater streams that feed into public drinking water systems, so aboveground leaks can pose a big risk.

Researchers studied data from 31,481 hydraulic fracture wells, which dig deep into the ground to fracture or splinter rock formations and release the natural gas or oil trapped inside. They found that from 2005 to 2014 there were 6,648 spills, as defined by each of the four state’s reporting requirements. The researchers created an interactive map allowing viewers to search by location, year, and cause of spill.

“There’s been so much focus on the ground water contamination and the casing incidences,” says Hannah Wiseman, the Attorneys’ Title Professor at Florida State University College of Law and an author on both studies. “We wanted to sort of shift the attention a bit to the surface.”

A similar study conducted by the Environmental Protection Agency only found 457 leaks for eight states between 2006 and 2012—but that’s because the EPA focused narrowly on leaks that happened exclusively during the process of hydraulic fracturing. This work focuses on the full lifecycle of a well.

“We think it’s important to study the whole life of the well,” said Wiseman, “because the process of hydraulic fracturing has enabled the drilling of so many more wells.”

Wiseman and her colleagues found that 75 to 94 percent of spills happened within the first three years of a well’s life. It’s a time when wells are first drilled and are most productive. Fifty percent of spills were related to storage, and moving fracking fluids via flow lines.

The authors believe their estimates are conservative, in part because of hiccups in how spill data is reported. For example, from 2001 to 2016 Pennsylvania required companies to report to the state’s Department of Environmental Protection by telephone any, “reportable release of brine or the discharge of any substance which would endanger downstream users of water, result in or create a danger of Pollution of Pennsylvania waters, or damage property.” While the telephone system was helpful in terms of ensuring that the state could send workers in rapidly when necessary, it’s less helpful in terms of written records—it’s likely that not all phone calls were recorded. When North Dakota switched from phones to a written system in 2010, the number of documented spills increased three to four percent.

And the rules leave it up to the companies to determine if a given release poses a risk to waterways and property owners. In some cases—when fracking fluid spills directly into a body of water, for instance—the risk is obvious. But other leaks are murkier. States also have different rules about how big a leak can be before companies have to report it, and some states even allow all leaks to go unreported as long as companies clean them up within a 30-day period.

So as it stands, the system makes it all too possible for leaks with impacts to human or environmental wellbeing to go undetected. In fact, many states don’t even have data on fracking spills that’s both comprehensive and readily accessible for study.

This scattershot record keeping can make it hard to trace back contamination after the fact, allowing problems to fester undetected. In Pennsylvania, for example, the most commonly reported source of leaks was “unknown,” making it difficult to correct the whatever problems were causing the spills.

“If we want better knowledge of what’s happening at the surface and how to prevent incidences,” said Wiseman, “we need to improve methods of reporting and collecting the data.”