Soothe a grasshopper, save the planet 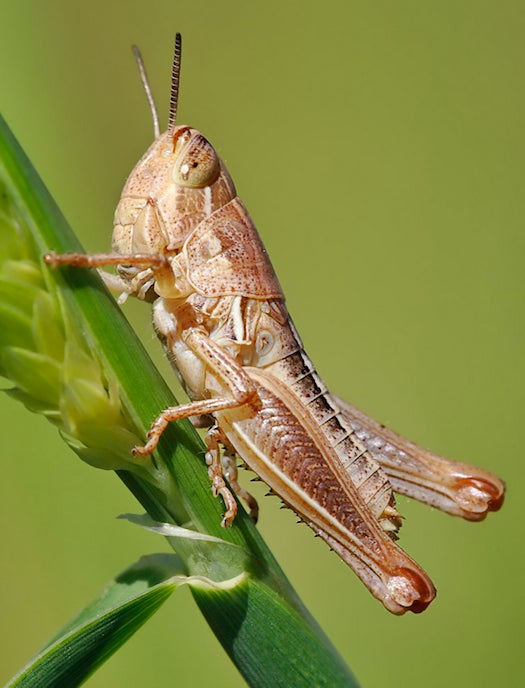 In the same way humans might be tempted to binge on some junk food when they’re under stress, grasshoppers head for the carbohydrate-rich foods when they get scared. The difference is the grasshoppers can leave behind some big-scale problems for the environment.

A stressed grasshopper’s body has less nitrogen because of the change in its diet, and microbes in the soil rely on that nitrogen to break down other material. Without the nitrogen from the grasshopper, plant parts will be broken down by microbes more slowly than usual, and without that help from the microbes, new plants will struggle to grow too.

So what freaks out grasshoppers? Well, getting eaten is pretty high on the list, and that’s what researchers at the Hebrew University of Jerusalem and Yale used to test this idea. They split up two groups of grasshoppers; the unlucky group was exposed to spiders, and the other acted as the control. Understandably, the spider-exposed bugs went for the carbs. When they measured the rate of plant-decomposition in both areas, plants in the stress-free portion decomposed between 62 and 200 percent faster than their counterparts.

Researchers went one step further in the experiment, substituting fake “grasshoppers” in the soil with a mix of sugar, protein, and the organic compound found in grasshoppers’ external skeletons. Even the small amount of nitrogen microbes took from the protein was enough to help out in decomposition.

If it sounds like an exterminating-bees-would-destroy-the-food-chain scenario, that’s because it sort of is, researchers say. If humans, directly or indirectly, cut too many species in the area, it could mess with the balance of spiders, potentially causing problems from decreased crop production to more CO2 in the atmosphere.