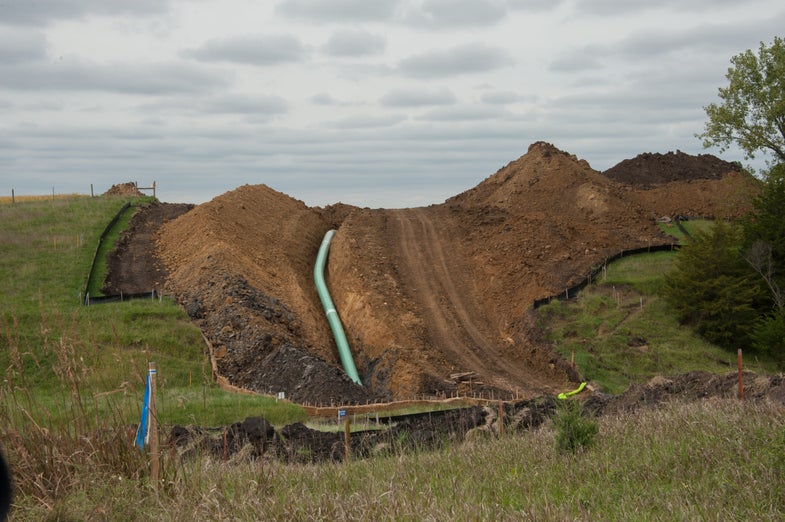 UPDATE 1/24/2017: President Donald Trump signed two executive memorandums today clearing a path for the continued construction of both the Dakota Access and Keystone XL pipelines, both of which were blocked by Barack Obama. Opponents of the DAPL have vowed to continue to oppose the construction. The original story, published in November 2016, is below:

Your friends have been checking in on Facebook at Standing Rock, North Dakota even though you know they’re right down the street. You’ve seen the dramatic images of unarmed protestors facing down heavily armed police and security forces. But you’re still confused. What is the DAPL anyways? Why are people so adamantly #NoDAPL? We’re here to help.

DAPL stands for the Dakota Access Pipeline, an underground pipeline that is currently under construction in North Dakota. A large contingent of protesters made up of Native Americans and environmental activists have been protesting the construction of the pipeline for months.

Where is the pipeline located?

The DAPL is still under construction. Its proposed path snakes 1,172 miles through parts of North Dakota, South Dakota, Iowa, and Illinois.

Why is the pipeline being built?

The pipeline is intended to transport 470,000 to 570,000 barrels of crude oil per day from the rich oil fields North Dakota to a storage facility in Patoka, Illinois. The pipeline would have a diameter of between 12 and 30 inches and would be buried underground for the vast majority of its path.

The pipeline is being built as a way to transport the large amounts of oil extracted from the Bakken without using tanker trucks or trains, which can be volatile and less efficient ways of transporting oil and gas. Whether transporting oil by train, truck, ship, or pipeline, all methods involve environmental risks in the event of a crash or leak.

Which leads us to…

Why don’t people want a pipeline nearby?

There are innumerable reasons that people aren’t interested in having a major pipeline nearby. The people most affected by the pipeline construction, and the majority of people on the front lines of the protest, are the Standing Rock Sioux Tribe and their allies. The tribe’s main sources of drinking water are located downstream of the current route of the pipeline, and the protesters fear that a spill on the pipeline could irrevocably contaminate their water supply.

It’s not an unfounded fear. An original route for the pipeline passed close to North Dakota’s capitol city, Bismark. That route was rejected in part due to fears that a pipeline spill would impact municipal water sources.

In 2010, a spill from an oil pipeline into the Kalamazoo river spewed 840,000 gallons of crude oil into the environment, leading to years of cleanup and recovery at a cost of hundreds of millions of dollars. That incident was the worst inland oil spill the United States, but far from the only pipeline-related oil spill. More than a million barrels of oil have leaked from pipelines in the last 20 years.

The environmental risk of oil leaks and spills have also drawn environmental activists, including high profile ones like Leonardo DiCaprio and Shailene Woodley to support the protests.

Then there’s the cultural aspect. According to lawsuits filed on behalf of the Standing Rock Sioux Tribe, the path of the pipeline crossed areas of cultural importance, including burial grounds and significant places of prayer. Some of those areas have reportedly already been destroyed in construction.

Clashes between protestors and security and police forces have become more heated as time goes on.

Is the DAPL related to Keystone XL?

No. Though the protests at the DAPL have been called the ‘next Keystone’ the two projects are different. While the DAPL is intended to link the Bakken oil fields to Illinois, the Keystone XL pipeline would have linked the Canadian oil sands to a transfer point in Steele City, Nebraska, crossing the Canadian provinces of Alberta and Saskatchewan as well as the American states of Montana, South Dakota, and Nebraska, carrying 830,000 barrels of crude oil per day.