What the frack is in fracking fluid?

Most of the ingredients are unknown 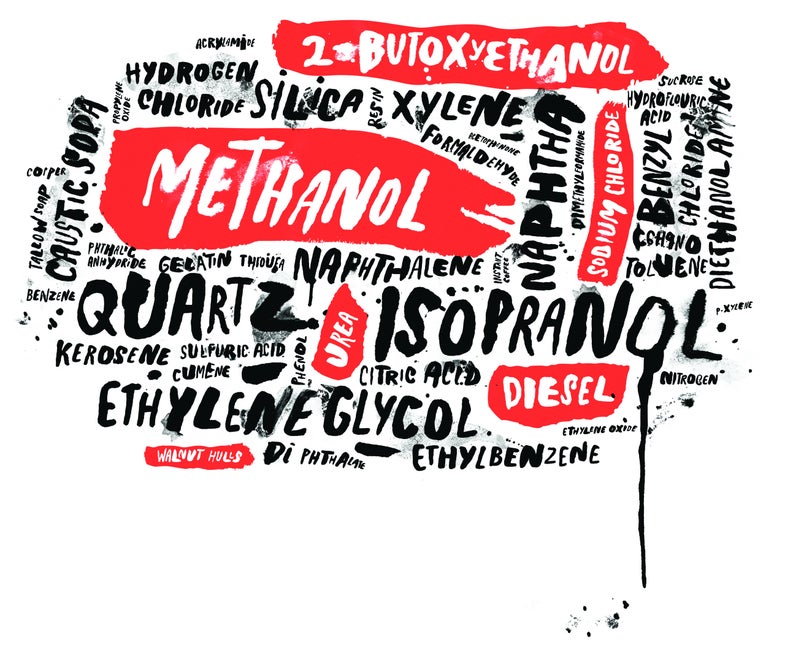 Over 100 billion gallons—that’s how much fluid fracking wells inject into the U.S. each year. The high-pressure slurry cracks underlying shale, releasing oil and natural gas trapped inside. But fracking’s rise raises questions about water pollution. Although scientists have linked individual cases of contamination to fracking, a 2016 EPA report on its safety was inconclusive. Companies don’t have to disclose what is actually in the slurry. Like Coca-Cola’s formula, these chemical cocktails are trade secrets, so it can be hard for scientists to gauge risk. Here are some components, from run-of-the-mill to rare, squeezed out of cagey corporations.

An alcohol often found in antifreeze that serves to winterize fracking fluid. If you drink it, you could go blind—or die.

This solvent keeps the slurry stable at high temperatures. But don’t inhale: It can damage your lungs and red blood cells.

Aka: table salt. It stabilizes fracking fluids. Even small amounts seeping into rivers and lakes can kill freshwater fish.

Fracking fluid isn’t all bad. Gritty shells show promise as a fracking proppant— they prop open fractures made in the shale.

The urine component undergoes a reaction that makes ammonia, using up water in the process. This means less waste left behind.

It makes the fluid slick, lowering its friction. But its cancer-causing components might ­contaminate groundwater.

This article was originally published in the March/April 2017 issue of Popular Science, under the title “What The Frack.”