FYI: Could Drugs Like “Bath Salts” Be Causing An Outbreak of Cannibalism?

Does the drug commonly known as “bath salts” make you particularly crave the taste of human flesh? There’s no scientific... 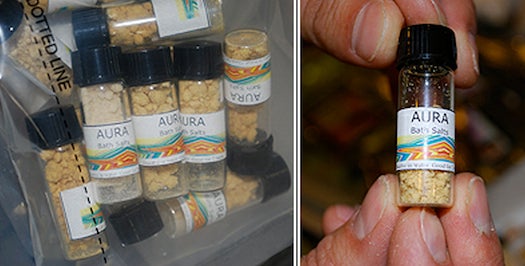 Does the drug commonly known as “bath salts” make you particularly crave the taste of human flesh? There’s no scientific evidence that it does. But it certainly could lead to a bit of cannibalism as a side effect.

Bath salts, the nickname for a relatively new type of designer drug that’s been cited as the cause for recent violent attacks — not to be confused with actual salts you put in your bath — does cause hallucinations for some people, along with a laundry list of other psychological effects. Methylenedioxypyrovalerone (MDPV), loosely agreed upon as the active ingredient in many bath salts, is under an emergency DEA federal ban, along with other, similar drugs in the cathinone family. It works like a stimulant, increasing activity in the nervous system in the same way as cocaine or Ritalin. The reuptake of neurotransmitters norepinephrine and dopamine is inhibited, and if that’s done with potent enough doses, it could lead to extreme paranoia and delusions. If a user’s reaction is especially bad, they could end up doing something horrific in a drug-induced psychosis–such as eating someone, as in the now-famous Miami “zombie” attack.

Similar incidents have occurred with other drugs, before bath salts hit the news; rapper Big Lurch was famously locked away for life in 2003 after killing and eating parts of his girlfriend while under the effects of PCP.

“Most people, fortunately, don’t want to chew peoples’ faces off,” says David Levey, a spokesperson for the DEA. “But it’s all across the board, and it’s often unpredictable.” There are more and more tales of bath salt-related cannibalism popping up, but that doesn’t mean the salts are causing a zombie epidemic. Dr. Mark Ryan, Director of the Louisiana Poison Center, says the events, though relatively infrequent, are “unusual, so they get our attention.”

There isn’t even a clearly defined understanding of what “bath salts” are and what they are not. Levey says the DEA classifies them according to their effects, similar to those of other drugs; Ryan says that when he uses the term, he’s talking about members of the cathinone family of chemicals. But both men have seen a wide range of products packaged, labeled, and sold as bath salts. Ryan, in particular, has found batches that were just pure caffeine, or a local anesthetic.

The CDC has explicitly stated that the cannibalism incidents are not the result of a zombie virus. In short, says the agency: The face-eating has happened in isolated incidents. It’s uncommon. There’s no specific reason for it other than drug psychosis. Don’t take bath salts.

Ask Us Anything
drugs