Sequenced for the First Time: the Genome of Human Sperm

Scientists have sequenced the full genomes of 91 sperm from one man, the first complete sequencing of a human gamete... 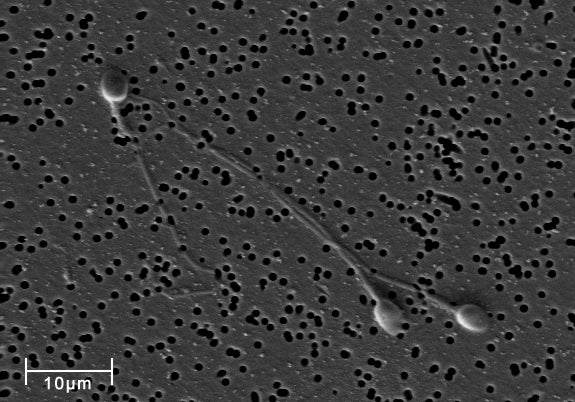 Scientists have sequenced the full genomes of 91 sperm from one man, the first complete sequencing of a human gamete cell. It demonstrates the vast genetic variation in one person, according to genetic researchers at Stanford.

The 40-year-old sperm donor has healthy kids and his semen sample was normal, and researchers had already sequenced his whole genome using other cells. They were able to compare that result with the 91 individual sperm cells they isolated from his sample. This allowed an interesting view of recombination — the genetic mixing that ensures a baby’s DNA contains genetic material from all four of its grandparents.

Recombination causes genetic variation in babies because of how it mixes the parents’ DNA. Human cells have 46 chromosomes — two copies of 23 chromosomes — and in reproductive cells, these are partitioned into one copy of each 23. When these gametes (sperm and egg cells) join, the resulting fertilized egg has each set. When this recombination occurs, pairs of chromosomes line up, as Stanford’s news site explains it. Sometimes during the queuing process, portions of matching chromosomes mix. This is responsible for the genetic variation in the resulting offspring.

“The exact sites, frequency and degree of this genetic mixing process is unique for each sperm and egg cell, and we’ve never before been able to see it with this level of detail,” said Stephen Quake, professor of bioengineering at Stanford and lead author of this new study.

The researchers found that individual sperm’s genetic mixing varied greatly, and some spontaneous mutations were more severe. Two sperm were missing entire chromosomes, for instance, which was a result of this mixing process. This would make them unlikely to fertilize an egg. As such, this study could have implications for fertility research.

“The DNA is the raw material that ultimately defines a sperm’s potential,” said co-author Barry Behr, a professor of obstetrics and gynecology. “If we can learn more about this process, we can better understand human fertility.”

The paper appears in the journal Cell.