Trilobites may have jousted with head ‘tridents’ to win mates

The appendages may be evidence that sexually motivation competition in animals is even older than we thought. 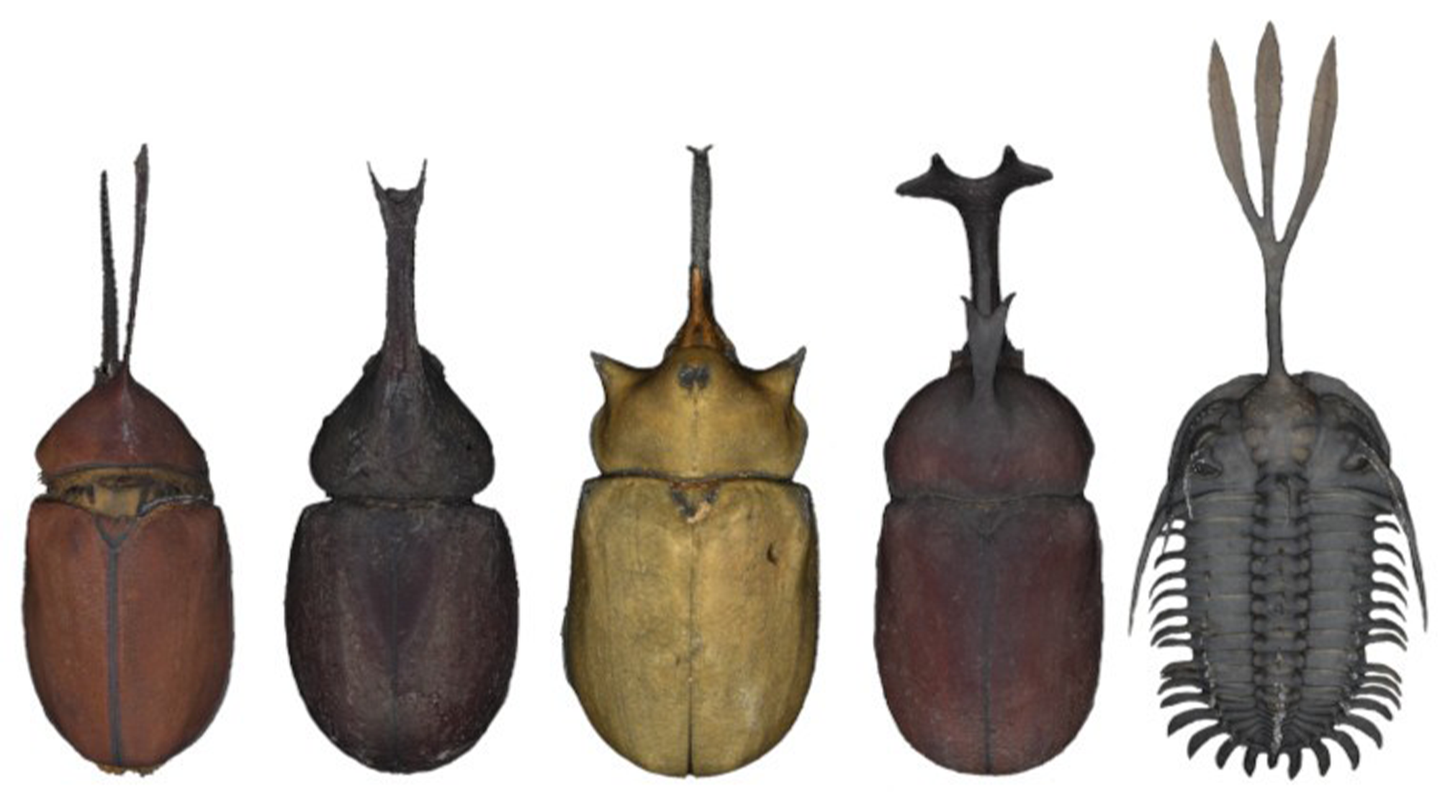 A team from the Natural History Museum, London compared the weapons of living beetles to Walliserops to evaluate how it might have used its trident. Alan Gishlick
SHARE

About 250 million years ago, some very important arthropods went extinct. Trilobites were marine animals similar to today’s spiders and crustaceans known for a wide variety of body designs. One particular trilobite called the Walliserops also could have given Aquaman a worthy fight thanks to a flat, trident-shaped appendage jutting out from its head.

A study published January 16 in the journal Proceedings of the National Academy of Sciences (PNAS) finds that these tridents may have been used by males to compete in fights for sexual dominance. These ancient invertebrates may have “jousted” millions of years before the medieval sport.

[Related: These ancient trilobites are forever frozen in a conga line.]

These appendages may have been used to try to prod at each other before attempting to get underneath their rival and turn them over, and this could be some of the oldest evidence of sexual competition and sexual selection. Sexual selection is an evolutionary process that affects the characteristics associated with reproduction. It affects both primary sexual characteristics, such as the genitals, and secondary features that influence reproduction, such as the antlers of deer or the tail of male peacocks.

“The extraordinary Devonian trilobite Walliserops carried a unique, giant trident on its head, the purpose of which has long been a mystery,” said Richard Fortey, study co-author and scientific associate at the Natural History Museum, London, in a statement. “We now believe that it was used for jousting between males striving for dominance. The evolution of sexually motivated competition in animals is hundreds of millions of years older than we thought.”

The study also speculates that they may have been sexually dimorphic, where females and males have differences in appearance, but more evidence is needed.

Scientists are still studying how far back sexual selection goes in the evolutionary tree. There is some thought the that the frills of Protoceratops is evidence of this process in dinosaurs, but there still isn’t enough evidence to rule out other potential roles for these features.

One way to decode what was happening in extinct animals is by making comparisons with living species. However, when structures are found in fossils, comparisons can be problematic since its not always clear what feature on a living species can be used to compare.

Ever since the description of Walliserops in 2001, the role of trilobite tridents has been tough to understand. In addition to their possible role in sexual selection, other defense possibilities and burrowing or sensing food are possible uses for the tridents.

To determine that the tridents were likely to be used in sexual selection, the team used evidence from a specimen at the Houston Museum of Natural History. Instead of having three points, or tines, this unique Walliserops specimen had four. The tines are about the same size and do not show evidence of an injury, and may have been born as a result of a genetic mutation.

“Even more important than the four-tined trident itself is the fact that the specimen is fully grown. By making it to adulthood, it shows that the feature that makes it different from other trilobites didn’t have a significant impact on its chances of survival,” the team wrote.

Changes in the fourth tine changes the overall shape of the trident, which suggests that the appendage likely wasn’t used for digging for feeing.

The team compared the specimen with the the striking weapons found on rhinoceros beetles. These present-day bugs have large horns that can grow to half of their body length and are used in fights between males during the mating season. They found the trident shape was most similar to the beetles that try to tip over their opponents with shovel-like weapons.

The amount of time it could have taken for the bugs to right themselves (like a knight in heavy armor trying to get up after being knocked off of his horse by a lance in a jousting match) would have allowed victorious males more time and opportunity to mate with females.

“It’s possible that these females may have been trident-less if the trident is a sexually selected characteristic. In this case, females may have been inadvertently placed into a different group of species altogether, but this would be difficult to prove,” the team wrote. If these tridents are examples of sexually selected characters, they body parts add to a growing body of evidence, showing that at least some at least some trilobite species could be sexually dimorphic.