Concrete is one of the world’s biggest carbon emitters, but a few bridge-builders hope to change that—by reusing it. 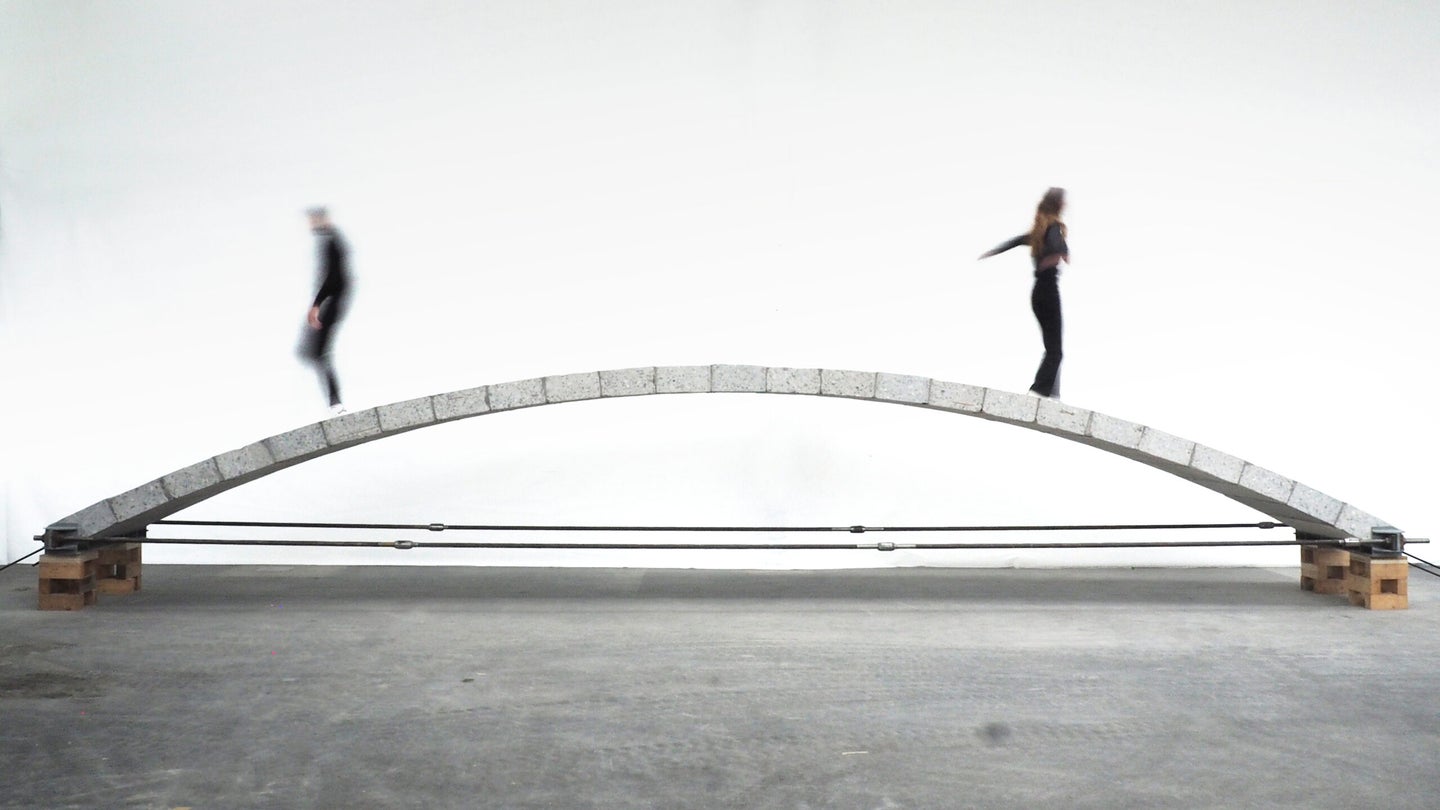 At first glance, it looks like a simple footbridge, a gentle arch. It could almost be the sort of bridge you might find in a medieval old town.

This bridge, however, doesn’t span a stream or send pedestrians along a flyover. Instead, it rests on a laboratory floor. That’s because its concrete blocks—25 of them, each more than half a foot thick—were taken from already-existing walls. To the engineers at the École Polytechnique Fédérale de Lausanne (EPFL) in Switzerland who built it, the bridge is a demonstration: it shows that concrete can be reused.

On October 11, they unveiled their handiwork to the public. It’s now on display at the Smart Living Lab in Fribourg, Switzerland, hopefully paving the way towards cheaper, more eco-friendly construction.

“The idea that the walls of a building could become a footbridge—to our knowledge, this is completely new,” says Corentin Fivet, an architect and structural engineer at EPFL, and one of the bridge-builders.

You likely don’t give much thought to the concrete beneath your feet and towering all around you, but there’s ample reason to worry about it. This basic building block of the modern world is also a sleeping giant contributing to climate change. As of 2018, concrete production accounts for as much as 8 percent of the globe’s carbon emissions. The much-maligned aviation sector produces less than half that amount.

Reinforcing the problem is the concrete that’s left behind when buildings are demolished or renovated. Much of that concrete—hundreds of millions of tons every year—proceeds to an ignoble end at a landfill (though there’s some evidence it can absorb carbon from the atmosphere).

Builders and bureaucrats are trying to prune that stream; for instance, taxing landfill-bound concrete to encourage recycling it instead. Concrete can be crushed down into aggregate, which can then be used as gravel, turned into pavement, or simply mixed with water and cement to make more concrete.

But the push for recycling hasn’t been as successful as hoped. In 2008, the European Union set a goal for 70 percent of its member states’ construction and demolition waste (including concrete, as well as other bits and bobs like masonry, metals, and glass) to be recycled by 2020. The actual result was more like 50 percent.

The bridge-builders at EPFL did more than recycle. Instead, like monument-builders of antiquity, taking stones from the ruins of crumbling pyramids, they wanted to use concrete that was already in place.

Today, architects and builders aren’t typically used to ringing up demolition companies in search of material. But that’s what the bridge-builders did. Within two weeks, they had found a renovation site that would provide concrete blocks to their liking: 20 centimeters (7.9 inches) thick, complete with holes that allow the blocks to be reinforced and strengthened with hefty post-tensioning cables.

Within two months, they received their blocks. Next, they set about assembling those blocks into an arch. In order to smooth out the subtle, fractions-of-an-inch differences between the blocks’ shapes and sizes, they filled the joints between blocks with mortar.  When they finished, they had a fully functional prototype bridge, about the length of a typical city bus.

The bridge-builders then tested concrete blocks with a tool called a rebound hammer, essentially pounding the concrete to measure its strength. They partnered with a firm to scan the concrete in order to judge, for instance, how much it had reacted with carbon dioxide in the air (over time, one of the major causes of corrosion in concrete). The results were positive.

“It’s not a new technology,” says Fivet. “We just put existing technologies together.”

Even though humans have reused building materials for thousands of years, the demolition firms who’d handle old materials are typically nowhere to be found in builders’ conversations. There’s a widespread belief, according to Fivet, that using such blocks isn’t reliable because it’s hard to know how strong a given piece of concrete actually is, especially after it’s been undergoing wear and tear for years.

Yet Fivet believes that modern testing methods have made it possible to do just that without destroying the material.  And today, new concrete poured and cured at a construction site can be deeply affected by fickle things like the weather. Architects already give themselves safety margins to account for changes to the concrete’s strength and quality, and Fivet believes reusing concrete is no more uncertain.

Therefore, he hopes that the bridge’s creation can spur the construction industry into taking action about their waste problem. He wants to show that doing what he and his colleagues have done can help.

If Fivet is right, then the end of a building’s life might not be the end of a batch of concrete’s life, but rather, a new beginning.

“The goal, which we believe is achievable, is to build new walls out of old walls,” he says.  “To build a full new building with reclaimed components.”