What will it take to save Oahu’s freshwater from the Red Hill fuel leak?

A Navy fuel facility sitting above Oahu’s biggest freshwater system has been flooding the surrounding landscape with toxins for decades. Now Red Hill is finally being forced to shut down. 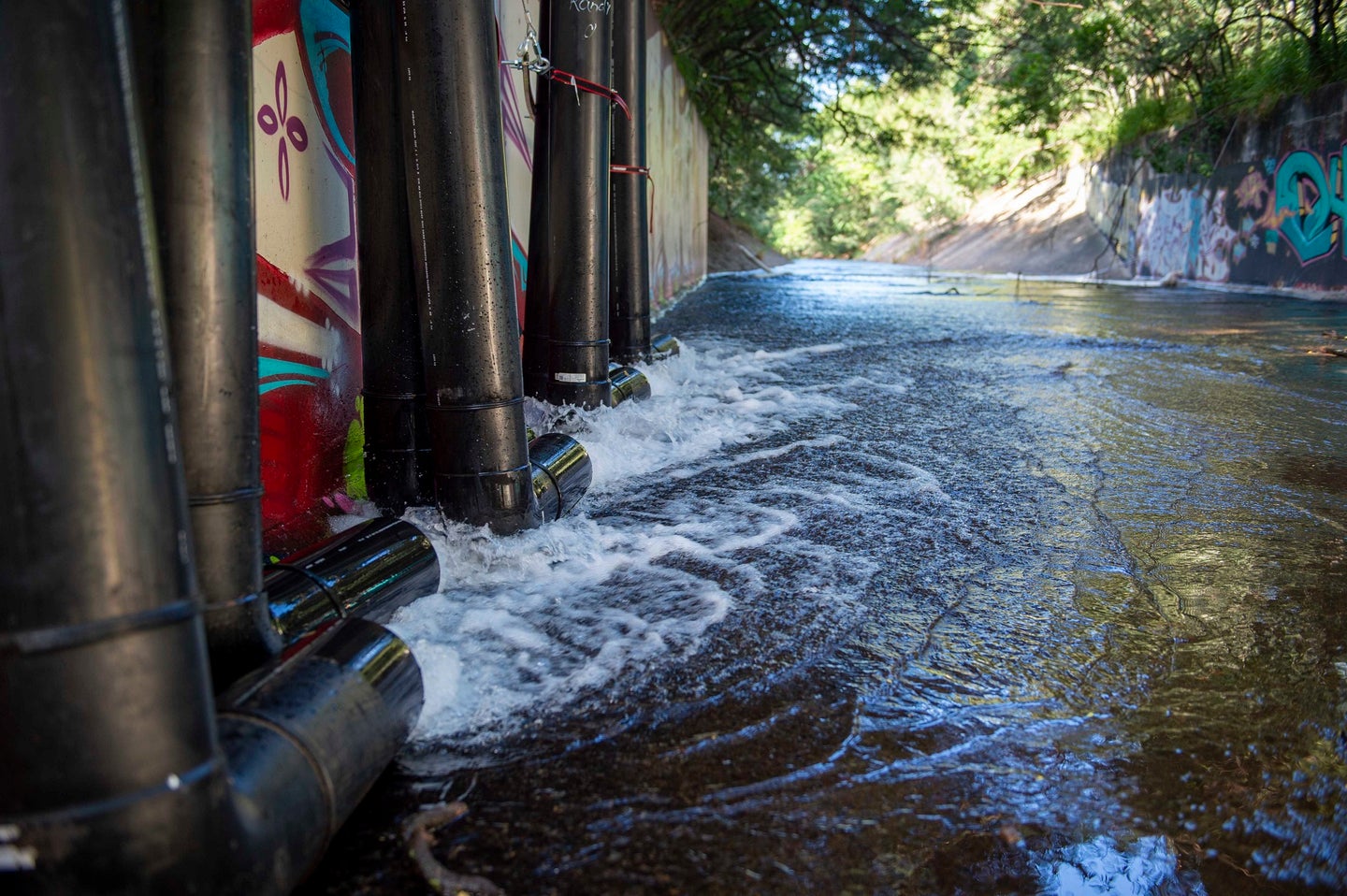 Oahu, Hawaii’s third-largest island, faces a surprising quandary: a lack of fresh water. After all, hundreds of waterfalls cascade down its volcanic mountains and rivers snake through its foggy forests. Yet drinking water is scarce, the result of hundreds of years of exploitation and mismanagement—and toxic leaks. Most recently, fuel seeping from a Navy storage facility near Pearl Harbor has threatened the main source of Oahu’s freshwater. If the fuel contaminates nearby wells, it will place thousands of people at risk of losing access to a precious daily resource.

The leaks at the Naval facility, dire as they are, are just one of Oahu’s water woes. The island’s geographical history has been dictated by various commercial interests like the sugar plantation industry, real estate developers, and tourist attractions, which have diverted and sapped its public water supply for private gain.

[Related: The US is losing some of its biggest freshwater reserves]

Water is so integral to the island that Shelley Muneoka, a social work specialist and Native Hawaiian board member of KAHEA, a community organization that protects the state’s natural and cultural resources, invokes the phrase Ola I Ka Wai, which roughly translates to “water is life” or “life is because of water.” That belief has been enshrined in a 1978 state law, known as the public trust doctrine, which ruled that water could not be bought or sold as property. As a result, landowners don’t own rights to the resource.

Taro and cotton farmers have used this doctrine to take back natural streams to grow their crops. In one recent case, the Supreme Court of Hawaii ruled that the state violated this doctrine when it allowed a real estate company to divert millions of gallons of water without environmental review. “When that water is diverted, it’s not just the death of one patch. It’s the practices around it—the community around it that have practiced them for generations also goes away,” Muneoka says.

But the doctrine and other local solutions might not be enough to address the catastrophe at the Naval facility. In November 2021, 14,000 gallons of kerosene-based jet fuel flooded into a tunnel at Kapūkakī, also known as Red Hill—just one of the recent fuel leaks at the underground military compound. Many members of public and grassroots groups, including the Oahu Water Protectors, the Sierra Club of Hawaii, and the Honolulu Board of Water Supply, have criticized the recurring problem as a “humanitarian and environmental disaster.”

Calls to shut down the Red Hill Bulk Fuel Storage Facility echo the growing rupture between Hawaiians and those who have exploited their land. The contamination is yet another example of the generational consequences of colonization on Indigenous lands and rights, experts and residents say. Without secure access to drinking water, the Navy is endangering island residents’ health and livelihoods.

The history of Red Hill goes back to 1893, when the American government annexed the islands and deployed troops, occupying the Kingdom of Hawaii. At the time, the US viewed land like Red Hill as a key hub for further Pacific conquest, explains Kyle Kajihiro, a professor of geography and ethnic studies at the University of Hawaii at Manoa and a board member of Hawai’i Peace and Justice.

For the military, the land was no more than a tactical foothold. The fuel facility sits on a mountain ridge between two valleys on the southern edge of the island. Below this is the basal aquifer—groundwater that sits on top of a body of saltwater—which supplies water for over 400,000 residents. As the Kānaka Maoli, or Native Hawaiians, see it, the Indigenous water systems and surrounding land were linked to naturally form a productive ecosystem.

“This was a very important geography for Kānaka Maoli. It sits in a very unique sort of location between where the two volcanoes, Wai’anae and Ko’olau, converge and then the watersheds flow into that estuary,” says Kajihiro.

Freshwater is channeled from these two mountain ranges into traditional land divisions called ahupua’a. These ahupua’a generally run from mountain to sea and encompass the streams and watersheds that flow down before converging on the shores of Pu’uloa, the lagoon now known as Pearl Harbor.

Through this geographical landscape, Native Hawaiians were able to create sustainable and thriving ecosystems. Using freshwater, they grew wetland crops in the marshy areas and created enclosed mariculture systems, such as fish ponds that benefit from shallow estuaries rich in nutrients, Kajihiro explains.

But the military expansion ignored that social and ecological value of Kapūkakī. The US government used the land for bulk storage instead, which is why today a 250-million-gallon fueling facility sits 100 feet above one of Oahu’s largest drinking reservoirs. Built in 1943, the facility’s 20 fuel tanks measure 250 feet in height and 100 feet in diameter, and are hidden inside cavities mined into the volcanic rock. The tanks are connected to three pipelines that run through a tunnel all the way to a pumping station at Pearl Harbor, 2.5 miles away.

“That is why Red Hill exists. It was used to create this fuel reserve that would be buried in the mountain secretively and supposedly protected from attack,” says Kajihiro. As a result, military engineering and infrastructure was prioritized over hydrology and ecology. This pattern has been repeated across the island with industrial interests as well.

Today, the sugar plantations that drained water from Oahu decades ago have been succeeded by real estate developers. Those companies use the old agricultural irrigation systems, which consist of tunnels drilled into the mountains and wells placed throughout drier, commerce-filled areas, to siphon away resources from local communities and businesses. Kajihiro points to this as both the development of capitalism in Hawaii and a major source of water conflict.

In 1947, just four years after Red Hill opened, the facility began to seep fuel. Data from the Sierra Club shows that over its 80-year history, the storage facility has leaked more than 188,000 gallons of chemicals into its surroundings. The Navy, meanwhile, denied knowledge of the ongoing leaks.

In 2014, a 27,000-gallon leak at the facility garnered criticism from the Honolulu Board of Water Supply, as well as local environmental advocates and communities. The crisis brought the aging facility’s issues into the spotlight, and when history repeated itself last year, the Navy publicly identified a leak of 14,000 gallons. That event contaminated water with nearly 350 times the level of hydrocarbons that is considered safe to drink. Drinking this unsafe water can cause a wide range of health conditions, with the most immediate being nausea, diarrhea, and stomach cramps. In a federal health survey, residents who drank the water also reported skin irritation, rashes, dizziness, exhaustion, and headaches.

With persistent leaks over the decades, jet fuel has likely permeated through the ground substrate, says Wayne Chung Tanaka, the director of the Sierra Club of Hawai’i, who has been involved in the grassroot organizing that led the government to intervene. He adds that old historic spills could be pushed further down the water table.

To prevent nearby civilian wells from drawing in the tainted water, in December 2021, Hawaii’s Board of Water Supply shut down the Halawa Shaft, which as the island’s largest freshwater source, serves more than 100,000 residents. With three key wells shut down, Hawaiians were asked to reduce their water use by 10 percent due to the increased demand and strain on the remaining open wells in other parts of the island.

Eventually, the recurring leaks and sustained pressure from local environmental groups lead to a Department of Health emergency order to close and drain the fuel facility. In March 2022, the Department of Defense ordered the bulk fuel storage facility to shut down permanently. The decision signaled a reversal in the Pentagon’s years-long narrative that the facility was necessary to national security, Tanaka says.

Despite the emergency order, however, more than 100 million gallons of fuel still remain at Red Hill. According to a defueling plan the Navy handed over to the Hawaii State Department of Health, the military plans to finish removing the chemicals by the end of 2024. But, on July 20, the Department of Health rejected the plan, citing a lack of substance and details on the defueling process.

As government agencies debate resolutions, the full extent of the crisis remains unknown: The Navy’s secrecy makes it unclear if more fuel has been leaking into the aquifer, says Tanaka. On June 13, branch officials released an internal report revealing that human error worsened the leaks. For the first time, they admitted that Red Hill is not safe for Oahu.

But there is a significant difference over the local response to the latest leak, Tanaka says. Shutting down the facility now has broad support, including from the city council and state legislation members, as well as local businesses and environmental and health organizations.

“Everyone is invested in the future of life on this island. Military spending is one of the pillars of the economy here, supposedly,” Tananka notes. “But you see this flip where everyone’s starting to question, that it isn’t in our best interest to let them run roughshod over our community. It’s pretty remarkable just to see that change.”

[Related: A new law is putting astronomy back in the hands of Native Hawaiians]

A dwindling water supply, shorter rainfalls, and an island-wide environmental crisis have brought new attention to just how precarious the ecosystem is. The water systems on Oahu are intricate and interconnected. With the Halawa Shaft and two other key wells shut down, water for residences is now being pulled from sources farther west, such as Honolulu and the surrounding valleys.

But Tanaka warns that this isn’t sustainable. Overpumping coastal wells could lead to saltwater intrusion in the system, which results in undrinkable brackish water. Already, a rise in chloride levels in one of the Oahu wells that is being over pumped indicates that there is an unhealthy amount of stress on the island’s water resources. As chloride levels rise and reduced rainfall further strains the wells, the time is ticking to get the fuel at Red Hill drained and moved off of Hawaii.

Disruptions to the water cycle also put the future of Oahu in peril. Underground water sources, for instance, move nutrients into the estuaries where fish feed. “The characteristics of our native plants and ecosystems are what allow us to recharge our aquifers because they capture rain and fog drip, and that percolates down to the groundwater table,” says Tanaka.

For Muneoka and other Native Hawaiians, it’s about more than the Navy at Red Hill. Muneoka equates the fuel in the water to death in a source of life.

“This deep underground water source that should be pure and untouched, it’s our responsibility to make sure that it can continue to do its thing uninterrupted,” she says. “One of the properties of water is that you can’t touch water without getting wet, meaning that it’s all interconnected. And so what happens is that one actor’s use of that water impacts the rest of us.”

Correction (August 9, 2022): The dimensions and holding capacity of the Red Hill fuel tanks have been corrected.