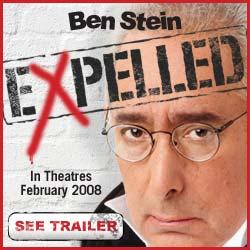 Everybody’s favorite dead-pan teacher and game show host, Ben Stein, is the face of a new documentary to be released this April called “Expelled: No Intelligence Allowed”. It’s ostensibly a movie about attacks on freedom of speech in today’s hostile climate among scientists in academia, but on closer inspection it really seems to be a thinly veiled screed for Intelligent Design.

A quick search of the web provides the background: the production company for the film is the same that produced The Passion of the Christ; its CEO and one of the film’s producers recently questioned the Godliness of the administration at Baylor University over an ID-related incident; and the producers used Stein as the narrator specifically because he wasn’t “overtly religious.”

What’s perhaps most dangerous about the film is not that it works to present Intelligent Design as a legitimate scientific theory, but that it tries to tear down Darwinism by equating it with Social Darwinism and therefore eugenics and racism (and Nazis; see Godwin’s law).

Professor Paul Zachary Myers at the University of Minnesota is one of the scientists interviewed for the film. He’s recently been caught up in a blog exchange with the film’s producers regarding this and other topics to do with the movie. Read the arguments and decide for yourself whether you’ll see the film. You can find the producer’s first post here followed by Myer’s response, followed by the producer’s response. So, what do you think? Will you watch “Expelled” when it hits theaters?