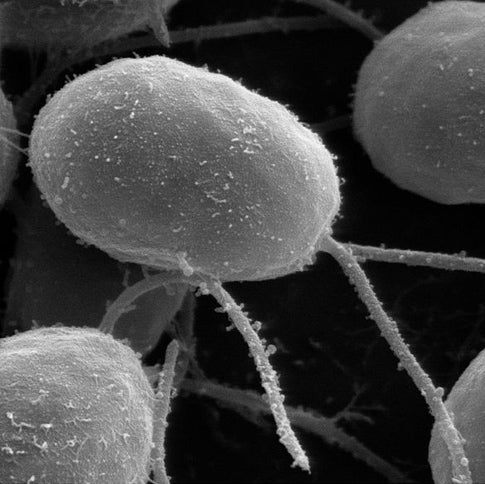 What if the key to curing blindness was found in unicellular algae?

In a recent study published in the journal Nature, a group of scientists were able to restore light sensitivity to formerly blind mice using a protein extracted from algaes of the genus Chlamydomonas. The Chlamydomonas are of particular interest because they exhibit phototaxis—an ability to orient themselves toward light sources to aid in photosynthesis. Eager to understand what caused this phenomenon on a genetic level, scientists at the Max Planck institute in 2003 isolated a sequence of genes that stored the blueprints for generating light-sensitive proteins. And now, a joint team of researchers from the Friedrich Miescher Institute in Switzerland and the Harvard Medical School have recently developed a therapy that introduces these genes into the eyes of blind mice. What they observed was a dramatic behavioral change that proved the mice had regained their sensitivity to light.

Dr. Botond Roska, leader of the Friedrich Miescher Institute team, has a clever analogy for putting his research into perspective: “Imagine giving a speech to a large room of people, but only the first row can hear you,” he says. The first row he’s referring to is the eye’s outer layer of rods and cones, the light-sensing cells that line the back of the retina and are the first step in a complex cascade of cells that pass information from the eye to the brain. It’s the job of this first row to pass back what they “hear” to the row behind them. When this first layer of cell is damaged beyond repair from such diseases as macular degeneration or retinitis pigmentosa, the eye becomes blind, even though most of the complex cascading mechanism is still functional. As Dr. Roska describes it, a blind eye is “like a camera with the cap on.”

Dr. Roska and his team decided to target the layer of cells below this first layer, injecting the cloned algae genes in an attempt to “turn up the volume of the speech” so that the second row could take up the slack left by a “deaf” first row and pass on the message to the rest of the audience.

To see if the treatment actually worked, two groups of mice, one with sight and one blind, were placed in dark cages for half an hour before the lights were turned on. Once the lights were back, the sighted mice became active and ran around their cage, while the blind mice stayed sedentary. When the mice treated with the Chlamydomonas genes were put through the same test, they exhibited levels of activity almost as high as the sighted mice, suggesting that they could tell the different between light and dark.

Then it was necessary to test the sensitivity of the mice’s newly restored vision—whether they could only detect changes in light intensity or actually discern shapes. To do this, the mice were placed in front of what must have been an adorable, mouse-sized movie screen and made to watch a series of lines of various widths move across the screen. The treated mice were observed to follow the lines, showing that they could indeed make out shapes. Most surprisingly, these mice would follow a line that was as fine as twice the width of the lines that a normal mouse would follow.

The next step for Dr. Roska and his team is to attempt to restore functionality to a wider range of light receptors. In a healthy eye, full vision is an average of the data recorded by cells that measure increasing intensity as well as a second type that measure decreasing intensity, named “ON” and “OFF” respectively. The Chlamydomonas gene works on the “ON” cells only, but it is thought that a protein from a separate microorganism might eventually restore “OFF” cells.

As amazing as these results are, it may be a while before the treatment can be applied to humans. The greatest challenge is posed by the therapy only being effective for very high intensities of light. In the complex human eye, there are as many as 40 separate genes that that account for our ability to adapt to many different light levels. The trick would be to find more sensitive gene tags for varying levels of light, or even to develop special goggles to help focus the light like an automatic camera does.

However, Dr. Roska’s work is a promising development for a condition that for many has seemed all but incurable in its finality.

Correction: a previous version of this article mistakenly attributed the initial research to isolate the Chlamydomonas_ light-sensitive gene to Dr. Boska and his team. This research was carried out by Dr. Georg Nagel and Dr. Ernst Bamberg of the Max Planck Institute in 2003._