Introducing the Lynx, a two-seat rocket built for space tourism 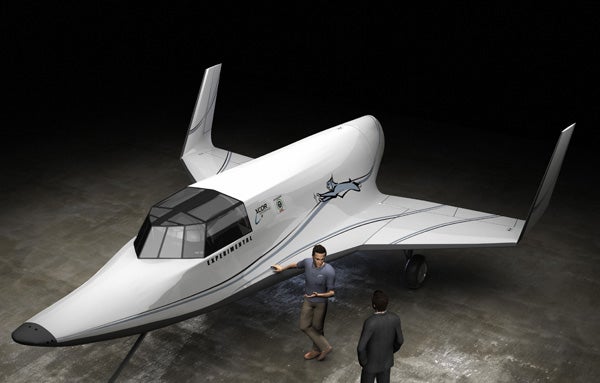 Today in Los Angeles, a private space company unveiled the latest entrant in the race to send paying passengers into suborbital space.

The Lynx, in development by XCOR Aerospace, is envisioned as a two-seat vehicle that will allow a paying passenger to ride up front with the pilot to experience weightlessness and see the Earth from space.

“From the beginning we worked towards a vehicle which is fully reusable, will fly often enough, economically enough and safely enough to succeed in what we expect will be a robust, competitive market place,” said XCOR president Jeff Greason at a press conference today.

XCOR’s been quietly working on liquid fueled rocket engines of all sizes and types in Mojave, California since 1999. The engines range from a diminutive alcohol-fueled “tea-cart” rocket suitable for showing off in hotel ballrooms (and attracting investors), to a methane-powered 7,500-pound-thrust engine completed last year for NASA.

Along the way, the company’s engineers have also hotrodded a homebuilt Long-EZ airplane with an alcohol-fueled rocket engine, picked up contracts from the Department of Defense to build novel rocket fuel pumps for cheaper operation of high powered rockets, and teamed with the Rocket Racing League to build the X Racer, a rocket-powered raceplane that XCOR chief test pilot and former Space Shuttle commander Rick Searfoss is now flight testing.

“As a test pilot and former astronaut, I’m absolutely enthralled to be having the prospect of flying this Lynx up through the development and test phase to the point where we are confident we can safely fly the paying public,” said Searfoss at the press conference.

Space is defined by an imaginary boundary at 62 miles altitude, and suborbital spaceships built by private companies aim to just sail past that mark for four or five minutes of weightless flight before falling back to Earth. That’s far short of the 200 miles or so reached by the Space Shuttle at orbital speeds topping 25 times the speed of sound.

Still, suborbital flight is a big challenge for any private company, and only one, Scaled Composites of Mojave, California has actually pulled it off. To get there, a ship has to crack three times the speed of sound using rocket power, keep its passengers alive with onboard life support, use maneuvering thrusters to orient itself in space, and somehow survive reentering the atmosphere, still going Mach 3, to make a safe landing.

Scaled’s SpaceShipOne, did all that in 2004 to win the $10 million Ansari X PRIZE, inspiring British airline tycoon Richard Branson to invest in SpaceShipTwo for his newly formed
Virgin Galactic. Branson’s plans hit a snag last summer, however, when a test stand explosion claimed the lives of three Scaled employees and set back the company’s rocket development for the new ships.

XCOR plans to launch the Lynx by 2010, the same year called for in Virgin’s revised schedule for SpaceShipTwo. The private space race is definitely heating up.