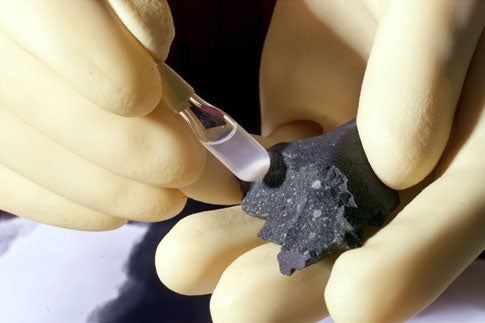 Although it’s only one part of the answer, we have come another step closer to solving the question of how life originated. Two necessary molecular ingredients of DNA and RNA have been confirmed to have originated from outer space. They join the handful of amino acids we have discovered to have been delivered to Earth on the backs of asteroids and comets. Publishing in the journal Earth and Planetary Science Letters, the team of research scientists from the US and Europe have demonstrated that uracil and xanthine are present in fragments of the Murchison meteorite and are not terrestrial in origin. Studies of the Murchison meteorite, which crashed in Australia in 1969, are routinely criticized over concerns of Earthly contamination.

Using an exceptionally laborious combination of gas chromatography and mass spectrometry, the scientists have shown that the molecules contain a heavy form of carbon—carbon 13—which is consistent with having formed in space. Organic compounds on Earth contain a lighter carbon variant. While no one has established the connection between the development of life on Earth and the molecules’ presence on meteorites, the discovery does shed light on the possibility of life elsewhere in the galaxy. If the basic ingredients are zipping around throughout the cosmos, the likelihood of life taking shape wherever the chemistry is right is most certainly increased.