In his "Future Farm" series, designer Michael Burton anticipates one application of nanotechnology: The poor earning money by using their bodies to grow products for the medical industry. "There is some darkness in the exhibition, but the presumption is that designers have to be constructive," says Antonelli. "Even when Michael Burton shows something highly dystopic—bodies transformed into farms—he's doing it so we know in advance what could happen and so we can fix it.". Michael Burton
SHARE

Starting next week, nanophysics and biomimicry get celebrated alongside sculpture and painting at the Museum of Modern Art in New York City. “Design and the Elastic Mind,” MoMA’s most science-centric exhibition to date, explores recent collaborations among scientists and designers. The results—teddy bears impregnated with the chicken pox virus, lollipops that deliver a visual explosion with every lick—are sometimes far out.

“I thought that designers and scientists could have a conversation,” says curator Paola Antonelli. “There are many ways that they can collaborate—some really frivolous and cute and some deadly serious.” The exhibition is on display from February 24-May 12. If you’re not in New York, catch a sneak peak in our photo gallery, where Antonelli walks us through some of the pieces. 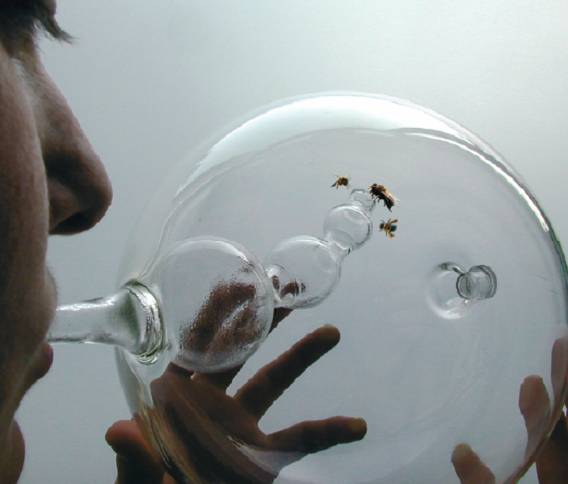 “Bees have a phenomenal odor perception,” explains designer Susana Soares in the exhibition catalog. “They can be trained within minutes using Pavlov’s reflex to target a specific odor.” When a woman breaths into the Fertility Cycle Object, bees are trained to fly to the large interior chamber if the woman is ovulating, the middle chamber during pre-ovulation, and the smallest chamber during post-ovulation. “This exhibition is about science—not only about technology—because I saw the possibility of almost bypassing technology for once and creating a short circuit between design and science,” says Antonelli. The Fertility Cycle Object is made of hand-blown borosilicate glass.

The legs of this futuristic-looking stool fall into place neatly in one swift motion when you lower the stool by its seat. The real design flourish, though, is the manufacturing process. The entire stool (joints and all) is printed three-dimensionally using laser sintering technology. “The stool was made that way because it was possible,” explains MoMA curator Paola Antonelli. “It’s like, ‘Why did we climb Mount Everest? Because it’s there.’ Here, they’ve taken a technological breakthrough and expressed it in the most beautiful, elegant, and effective way possible. A stool like that, which would be gorgeous if it were made of separate tubes of iron put together in the most old-fashioned way, becomes magical when you know that it’s all printed in one shot. It’s the expression of a possibility.” 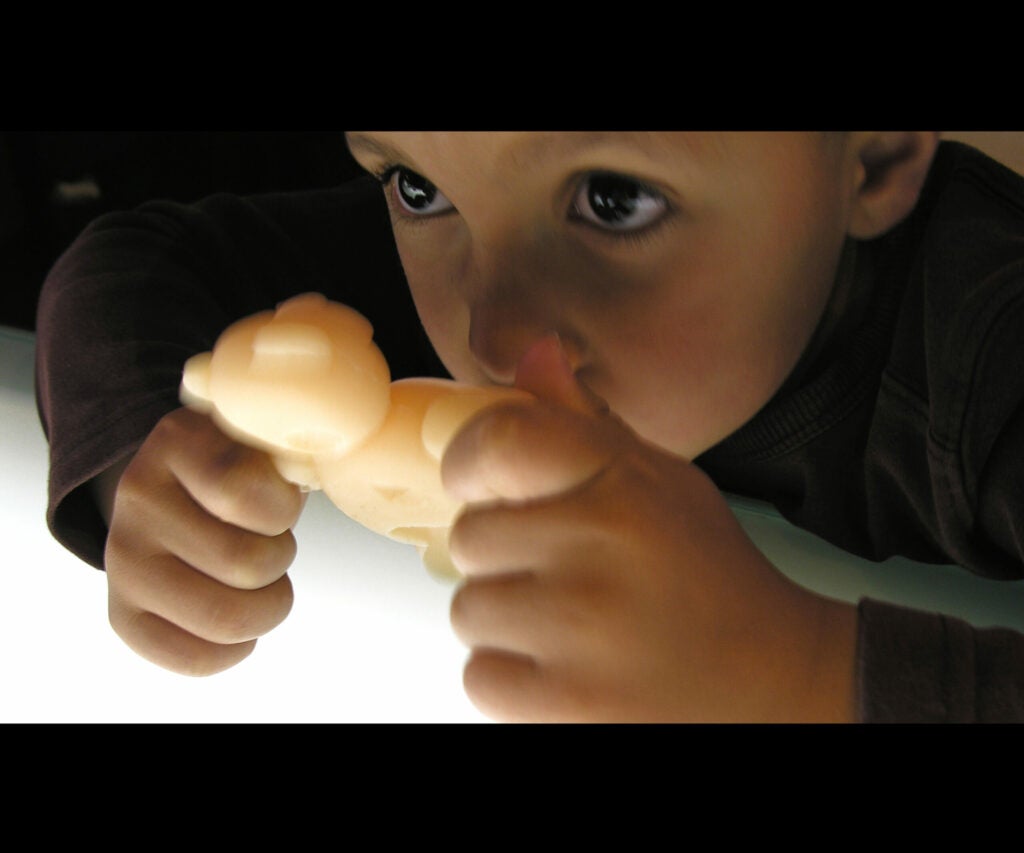 The partnership between scientists and designers has been especially active in Great Britain, according to Antonelli. “At the Royal College of Art, students have been talking to scientists for the past three years.” Pox Teddy, designed by Mikael Metthey of the College’s Design Interactions Department, is a teddy bear impregnated with the chicken pox virus. Playing with it ensures that children are exposed to the disease when they are still young—an alternative to vaccination. 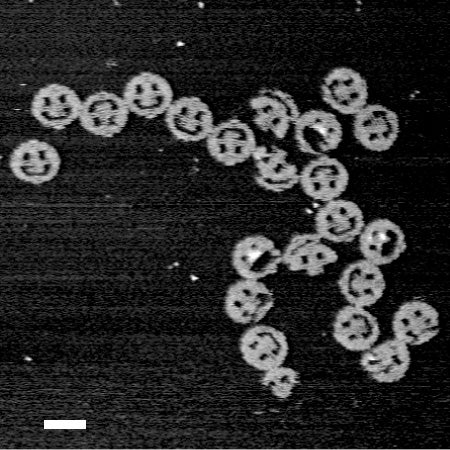 “Dr. Paul Rothemund had this big breakthrough—that you can take DNA and fold it in different shapes,” explains Antonelli. “He decided to make it into smileys. Why? So people could have a point of contact and go further in.” Rothemund’s technique, known as “scaffolded DNA origami,” may one day be used to build faster computers. “Designers are responsible for keeping the human scale central no matter what they’re confronted with. Be it innovations in nanophysics or computational design; they maintain the human dimension.”

In his “Future Farm” series, designer Michael Burton anticipates one application of nanotechnology: The poor earning money by using their bodies to grow products for the medical industry. “There is some darkness in the exhibition, but the presumption is that designers have to be constructive,” says Antonelli. “Even when Michael Burton shows something highly dystopic—bodies transformed into farms—he’s doing it so we know in advance what could happen and so we can fix it.” 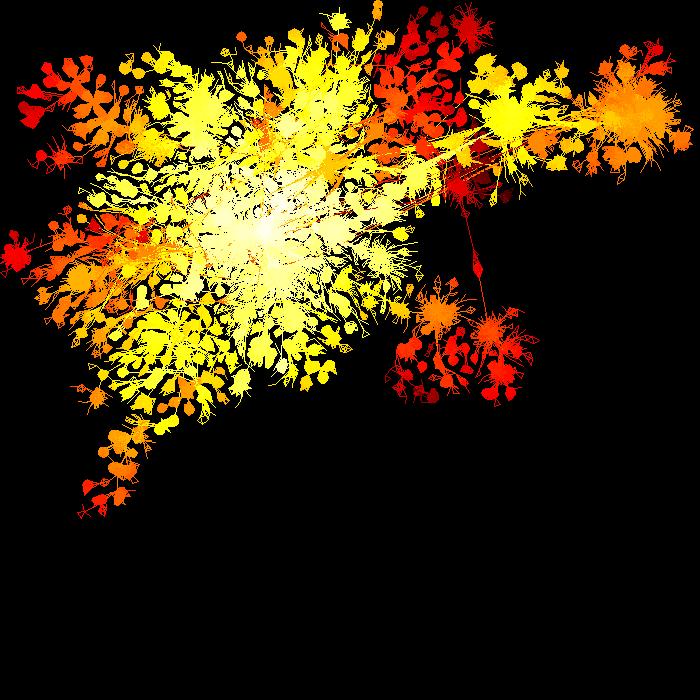 The Protein Homology Graph from the University of Texas at Austin’s previous work, which looked at similarities in proteins to point towards evolutionary ancestors. 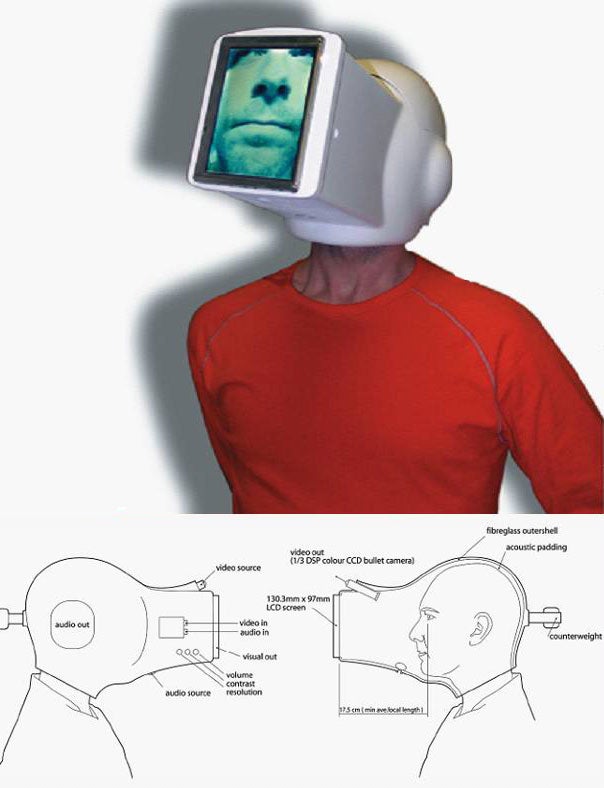 “One room in the exhibit is about the balance between the individual and the collective sphere,” says Antonelli. The Interstitial Space Helmet tries to meld the physical and virtual world. A CCD bullet camera mounted inside the decidedly bulky headgear projects a live-feed of the wearer onto an LCD screen that faces outward. According to designers, the helmet can be a way of “developing or refining the digital persona.” If you’re wondering about neck pain, fear not. A protruding counterweight on the back of the helmet helps distributes the load of the front-heavy design.
culture