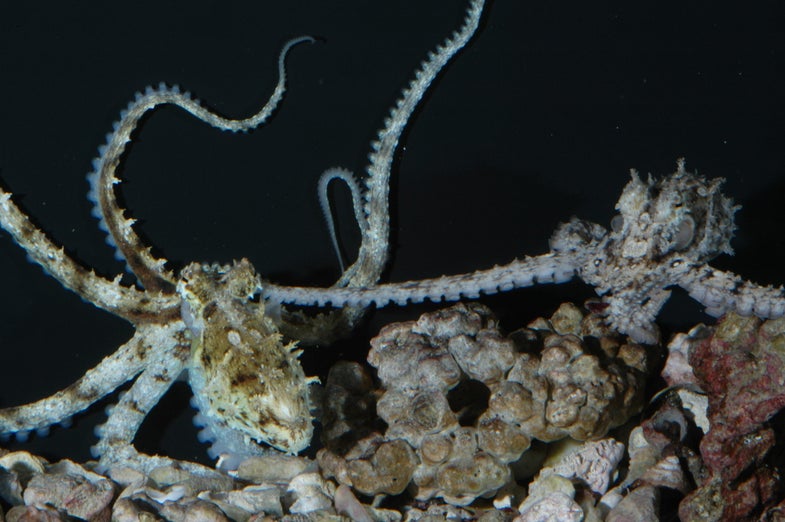 UC Berkeley scientists have found a species of octopus whose members flirt, hold “hands”, and ward off rival suitors as part of a complex mating ritual. Previously, researchers thought octopuses were fairly boring on the dating front, and didn’t engage in complex behavior (which would be kind of a bummer, given that both male and female die not too long after mating). But the new work, published in Marine Biology, reveals that these slinky creatures have got their own moves.

The Berkeley biologists, while snorkeling in Indonesia, tracked and observed the Octopus Abdopus aculeatus, which has a tan body and 8-to-10-inch-long arms. They found that males–we’re still talking about octopuses here–guarded the dens of prospective mates, flirted and showed off. There were also a few tricksters in the group: These males hide the traits that indicate their gender, give the impression that they’re females, and effectively sneak in on potential mates. It’s Some Like it Hot, octopus-style. “They’re obsessively secretive, solitary and pretty spooky,” says Berkeley biologist Roy Caldwell. “If you watch them, they watch you back. It’s hard to study them.”

And we know what you’re wondering. Is there video? And the answer is yes. Yes, there is.

Below, Abdopus aculeatus mating off the coast of Sulawesi, Indonesia.