Moscow’s Stray Dogs Evolving Greater Intelligence, Including a Mastery of the Subway

For every 300 Muscovites, there’s a stray dog wandering the streets of Russia’s capital. And according to Andrei Poyarkov, a... 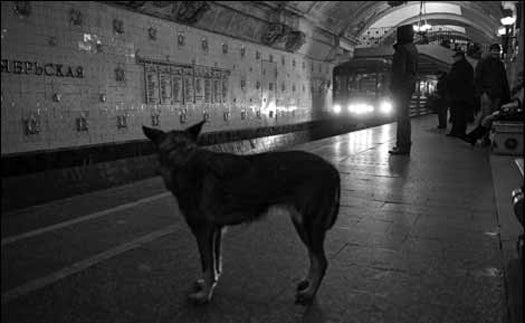 For every 300 Muscovites, there’s a stray dog wandering the streets of Russia’s capital. And according to Andrei Poyarkov, a researcher at the A.N. Severtsov Institute of Ecology and Evolution, the fierce pressure of urban living has driven the dogs to evolve wolf-like traits, increased intelligence, and even the ability to navigate the subway.

Poyarkov has studied the dogs, which number about 35,000, for the last 30 years. Over that time, he observed the stray dog population lose the spotted coats, wagging tails, and friendliness that separate dogs from wolves, while at the same time evolving social structures and behaviors optimized to four ecological niches occupied by what Poyarkov calls guard dogs, scavengers, wild dogs, and beggars.

The guard dogs follow around, and receive food from, the security personnel at Moscow’s many fenced in sites. They think the guards are their masters, and serve as semi-feral assistants. The scavengers roam the city eating garbage. The wild dogs are the most wolf-like, hunting mice, rats, and cats under the cover of night.

But beggar dogs have evolved the most specialized behavior. Relying on scraps of food from commuters, the beggar dogs can not only recognize which humans are most likely to give them something to eat, but have evolved to ride the subway. Using scents, and the ability to recognize the train conductor’s names for different stops, they incorporate many stations into their territories.

Additionally, Poyarkov says the pack structure of the beggars reflects a reliance on brain over brawn for survival. In the beggar packs, the smartest dog, not the most physically dominant, occupies the alpha male position.

The evolution of Moscow’s stray dogs has been going on since at least the mid-1800s, when Russian writers first mentioned the stray dog problem in the city. And that evolution has been propelled by deadly selective pressure. Most of the strays arrive on the streets as rejected house pets. Of those dogs kicked out of their homes, Poyarkov estimates fewer than 3 percent live long enough to breed. To survive those odds, a dog really does have to be the fittest.