Full destruction of the toxic hydrazine fuel tank remains unconfirmed. Videos of impact and launch inside 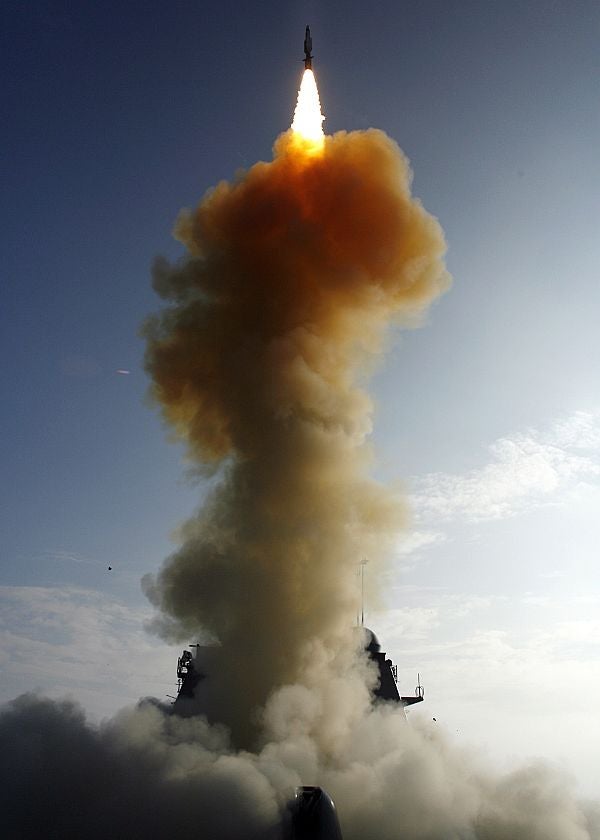 Last night at approximately 10:26 EST, after a long buildup of preparations, the Navy took the controversial step of shooting down a dead U.S. reconnaissance satellite from its low-Earth orbit. The satellite, which is about the size of a school bus, was destroyed to prevent a potentially hazardous impact with Earth, the military has said. It was moving faster than 17,000 mph at an altitude of 133 nautical miles above the Pacific when a modified SM-3 anti-ballistic missile launched from the USS Lake Erie, a Ticonderoga-class AEGIS missile cruiser, reportedly made impact.

As of noon EST, the Navy has yet to fully confirm that the satellite’s fuel tank filled with toxic hydrazine propellant was destroyed, saying instead that they have a “high degree of confidence” that the tank was impacted.

While the official reasoning for shooting down the satellite was to prevent release of the toxic hydrazine fuel in a populated area here on Earth, although many defense analysts were skeptical of the degree of danger.

More importantly, the mission also provides a convenient justification for the U.S. to flex its space weapons capabilities on the world stage. The missile used in the mission was originally designed to destroy incoming ballistic warheads as part of the U.S.’s missile defense program. The Pentagon maintains that the modifications made to their weapons systems to track a cold satellite target rather than a hot incoming warhead was a “one-time modification,” according to vice chairman of the Joint Chiefs of Staff Gen. James E. Cartwright; nevertheless, the ability to target and destroy orbiting satellites is a major tactical advantage, and the data gained from a real-world test such as today’s is certainly a valuable commodity.

In revisions to the National Space Policy document in 2006, President Bush took an aggressive stance toward the proliferation of space weapons, reserving the right to conduct “U.S. defense- and intelligence-related activities in pursuit of national interests” in space.

Last year, China conducted a similar exercise when it destroyed one of its own disabled weather satellites in a much higher Earth orbit with an anti-satellite weapon—an act that was viewed as unnecessarily provocative by the West. The Chinese satellite presented no immediate harm to Earth, and many analysts have stated that the large cloud of space debris generated from the destruction could present a danger to subsequent space missions.

Predictably, China has in turn condemned today’s action. In a statement, a foreign ministry spokesman said “China is continuously following closely the possible harm caused by the U.S. action to outer space security and relevant countries. “

Small pieces of debris from the destroyed satellite that don’t break up in the atmosphere are expected to fall to Earth in the coming hours and days—harmlessly, the Navy hopes, into the Pacific. Nevertheless, the Federal Emergency Management Agency has released a guide for “first responders” on the chance that they encounter any potentially dangerous fallen materials.

Meanwhile, the amateur satellite-spotting community is abuzz gathering their own information on the mission. You can read their data as it comes in on the mailing list at satobs.org.

The Navy has released the following videos from the mission, showing the launch of the SM-3 missile and the reported impact: