It looks like your kindergarten gut reaction to kissing might have been correct after all: it really is sick. Or,... 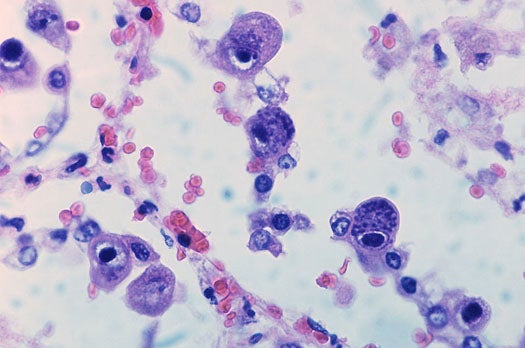 It looks like your kindergarten gut reaction to kissing might have been correct after all: it really is sick. Or, more specifically, the practice is designed to spread sickness. British scientists say the human habit of kissing evolved for less-than-romantic reasons, but one that is nonetheless important to a healthy reproductive relationship: to spread germs.

Cytomegalovirus, which lives in human saliva, is generally innocuous, but when introduced during a pregnancy it can be extremely dangerous, killing unborn babies or causing birth defects like deafness or cerebral palsy. However, if cytomegalovirus is introduced to a woman in small doses before she conceives, she will build an immune resistance to it. Optimally, kissing the same male for six months prior to pregnancy gives the woman’s immune system the practice it needs to render cytomegalovirus impotent.

The escalation of a physical relationship also aids in the immunity-building process. That initial, innocent peck delivers just a small amount of the virus to the woman, reducing her chances of becoming seriously ill. As the relationship ramps up, so does the face time with her mate, delivering stronger and stronger doses as the snogging becomes more, ahem, passionate.

Ideally, by the time the stork comes calling, her mate has spent plenty of time dosing her heavily and her immune resistance is strong enough to ward off infection in her offspring. It turns out love really is infectious, and it’s a good thing too.