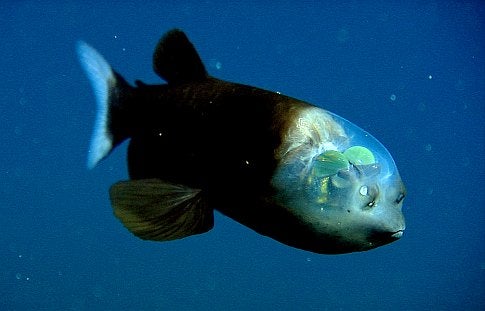 Ever since the fish’s discovery in 1939, scientists have believed that the tube-shaped eyes of Macropinna microstoma, commonly called the “barreleye,” were fixed in place, limiting its vision to whatever was directly overhead. Recent research from Monterey Bay Aquarium Research Institute (MBARI) proves this theory wrong: in reality, this crazy fish can rotate its eyes from an overhead view, which helps it locate prey swimming above, to the front of its face. This helps explain how the fish is able to actually capture the prey with its tiny mouth.

The MBARI scientists observed the fish up to half a mile below the ocean surface using remotely operated vehicles — robot submarines equipped with high-def video cameras — and they captured their eerie green, moveable eyes on film (see video). They also were able to capture a live barreleye, and observe the eye movement in person in an aquarium aboard their research ship.

The fish likely evolved this way in order to survive in the pitch-blackness of the deep sea. Its super-light-sensitive eyes make out shadows and shapes of prey above. Once it spots a potential meal, the eyes shift forward and the fish swims towards it. If all goes according to plan, it has a tasty treat. The researchers think that the green pigment in the eyes may help the fish locate bioluminescent prey, including jellyfish, by filtering out the rare sunlight that does make it to the sea depths.

The new research also turned up another surprising fact about the fish: its head is enclosed by a see-through, fluid-filled shield. The researchers speculate that the fish not only eats jellyfish, but also steals copepods and other small animals trapped in the jellyfishes’ tentacles. The shield likely helps protect the eyes from jellyfish stings during this thievery.