8 Percent of Human Genome Was Inserted By Virus, and May Cause Schizophrenia

The rise of psychopharmacology has led doctors to not only treat mental illnesses like regular diseases, but think of them... 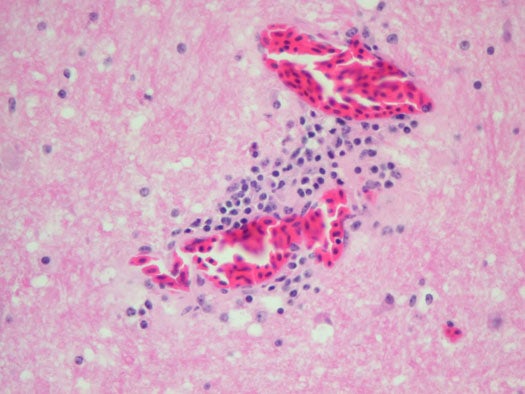 The rise of psychopharmacology has led doctors to not only treat mental illnesses like regular diseases, but think of them as such as well. Turns out, schizophrenia may be more than just a disease in concept, but actually a virus itself. According to new research, as much as eight percent of the human genome consists of viruses that inserted themselves into our DNA for replication, including the gene that causes schizophrenia.

Writing in this week’s issue of the journal Nature, Cédric Feschotte, a professor of biology at the University of Texas, Arlington, explains how traces of animal virus DNA *found by Keizo Tomonaga, a professor at Osaka University, Japan, may form the genes for schizophrenia and other mood disorders.

By spreading his search to a class of viruses ignored by other researchers due to its inability to infect primates, Tomonaga found far more viral DNA in our genome than previous studies. The virus type, called bornaviruses, typically infects hoofed mammals and birds, but clearly it used to infect primates sometime in the past. Although most of the viral DNA is junk, Feschotte found that the mutations that cause those psychological diseases strongly resemble bornaviruses.

Science has long known that some components of our DNA are relics of viruses that entered into our genome in some past infection. However, no one ever thought that virus remnants formed this much of our genome, or that one of the viruses might lead to disease, let alone something as complex as mental illness.

The findings are controversial, and the link between bornavirus DNA infection and schizophrenia remains poorly understood. However, the ability of viruses to alter our DNA throws an interesting new wrinkle into our understanding of how potentially dangerous mutations managed to escape natural selection.

*Previous versions of this story didn’t mention the contribution of Professor Tomonaga.