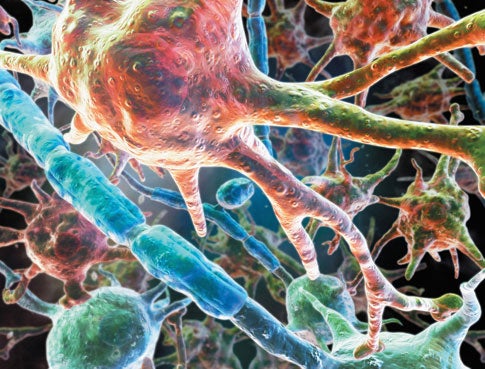 You have to listen very, very closely, but yes, cells produce a symphony of sounds. Although they won’t win a Grammy anytime soon, the various audio blips produced by cells are giving scientists insight into cellular biomechanics and could even be used to help detect cancer.

Researchers at the University of California at Los Angeles studying baker’s yeast cells discovered that the cell walls vibrate 1,000 times per second. These motions are too slight and fast to be caught on video, but when converted into sound, they create what the scientists describe as a high-pitched scream. (It’s about the same frequency as two octaves above middle C on a piano, but not loud enough to hear with the naked ear.) “I think if you listened to it for too long, you would go mad,” says biological physicist Andrew Pelling, now at University College London. Pelling and Jim Gimzewski, his adviser at UCLA, theorize that molecular motors that transport proteins around the cell cause the walls to vibrate.

So far, scientists have not observed mammalian cells that audibly shimmy on their own, at least in part because animal cells’ wiggly membranes are less likely to vibrate than the sturdy cell walls of yeast and plants. But human cells certainly squeal when zapped with light.

When Richard Snook and Peter Gardner, biologists at the University of Manchester in England, blast human prostate cells with infrared light, their microphones pick up thousands of simultaneous notes generated by the cells. Through statistical analysis of these sounds—which are created as the cells rapidly heat up and cool down, causing vibrations in the air molecules directly above them—Snook and Gardner can differentiate between normal and cancerous cells. “The difference between a healthy cell and a cancer cell is like listening to two very large orchestras playing their instruments all at the same time,” Gardner says. “But in the cancerous orchestra, the tuba is horribly out of tune.”

Gardner is fine-tuning the technique in hopes of replacing current, unreliable pre-biopsy prostate-cancer tests. His ultimate goal is to reduce the number of prostate biopsies performed, 75 percent of which come back negative.