Florida is a preview of our climate change future 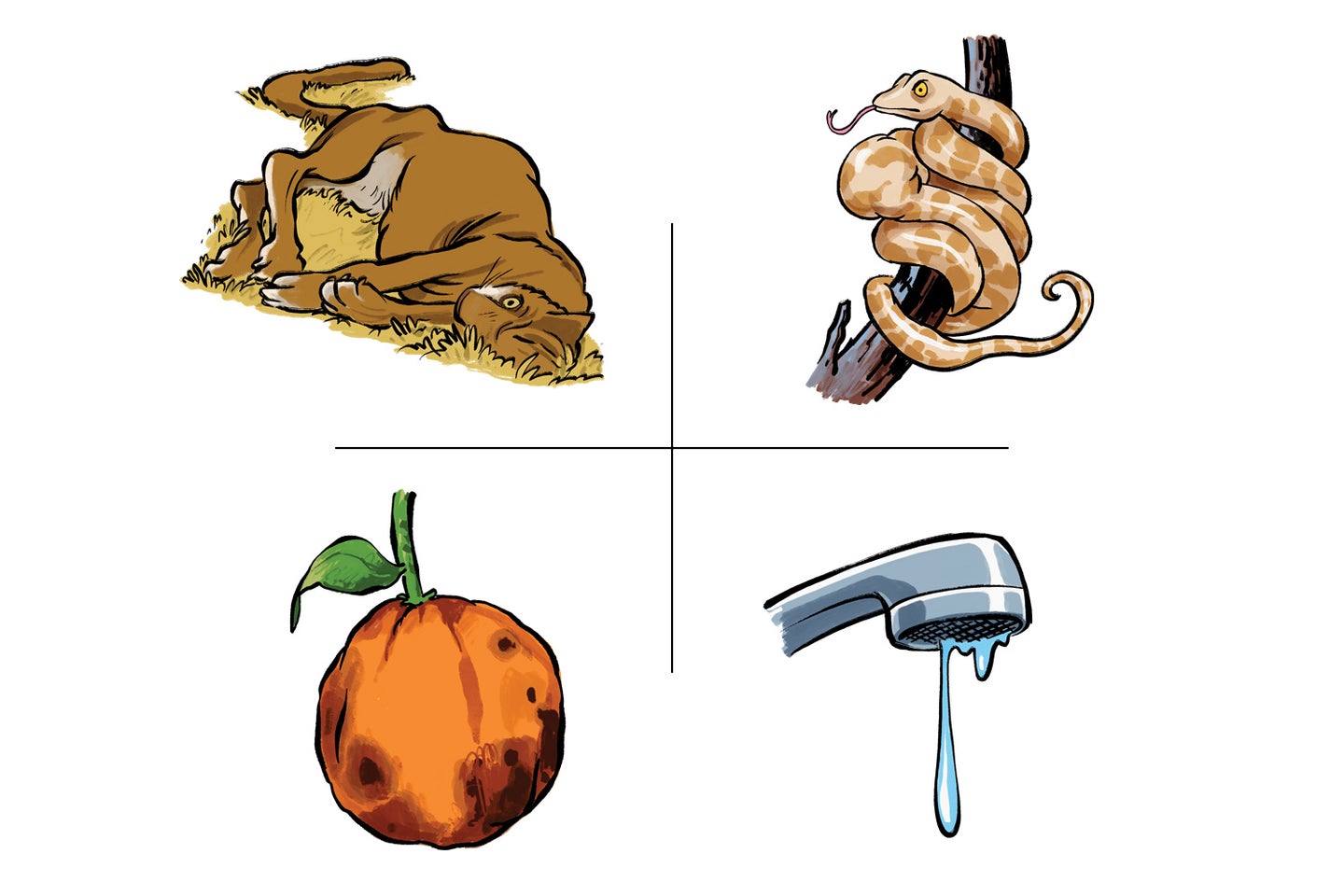 The Florida Problem: A Special Report. Struggling crops. Salty aquifers. Invading wildlife. Piles of dead fish. The Sunshine State feels the squeeze of environmental change on its beaches, farms, wetlands, and cities. But what afflicts the peninsula predicts the perils that will strike north and west of Apalachicola, and so it demands our attention. If Florida is in trouble, then so are we all.

Making room for everyone

Florida is one of the fastest-growing states in the nation. Over the past 30 years, the population—up by nearly 2.5 million since 2010—has spurred developers to convert forests and wetlands into suburbs, airports, and universities. These new hardscapes, which are most prevalent in Collier County on the southwestern shore, threaten biodiversity, increase flood risk, and squeeze endangered species like the Florida panther into tight quarters with humans. As a conservationist, I’ve been fighting for years to protect the cats’ territory so their numbers can expand.

Until the mid-20th century, the public saw the wildcats as vicious predators, so the state issued a $5-per-head bounty. Their tally dwindled as low as 20; today, a recovering pride of about 230 lives on the southern tip of the state. But as Florida grows, developers and the government consider where to put people, not panthers. On the Gulf side, suburban blocks abut the wilderness. The planning is so poor that I’ve seen big-cat crossing signs between Walmarts and subdivisions; it’s no surprise that cars are the species’ top man-made killer.

A patchwork of public and private acreage farther inland might be the only place the cats can go to thrive. But the region isn’t a safe haven: Owners stand to turn a profit by converting it to farms or houses.

In 2005, as predicted, developers started chipping away. First, the government approved the Ave Maria planned community. We responded with a lawsuit, attempting to preserve the area for the panther and 18 other species, including the eastern indigo snake and the sandhill crane. Rather than get held up in court, the contractors wanted to work with us.

We’ve partnered with the 11 landowners to draft a long-term building blueprint for a 152,000-​acre chunk in central Collier. The plan will allow for more roads—but also wildlife bridges. And owners will develop only 45,000 acres, leaving 107,000 acres of open neighborhoodless land.

If we can’t strike the right balance here, the mistake could have ripple effects because some of these property owners also have land elsewhere in Florida. If this isn’t a positive experience for them, they could back out entirely or stop us from protecting other areas crucial to the fragile panther population.

Why did it have to be snakes?

Ian Bartoszek, Wildlife Biologist at the Conservancy of Southwest Florida. As told to Jessica Boddy.

Burmese pythons have invaded South Florida. In the five years between 2013 and 2018, my team of biologists removed more than 500 snakes (some 12,000 pounds worth) in 55 square miles of wilderness outside Naples, which sits on the Gulf side of the state, not far from the Everglades. The reptiles, primarily the offspring of escaped pets, have made it as far as the Keys and are slithering their way up to the central part of the state, disrupting ecosystems as they go. All our native fauna is on their menu. No one really knows what the future of the Everglades—and beyond—looks like if we can’t get these predators in check. But first, we need to get a sense of how much wildlife they consume as they spread.

The state does send some bounty hunters into the Glades after the snakes, but that won’t solve the problem. We need to know where they are, what they eat, and how much havoc they wreak on food chains so the state can develop a plan to mitigate their impact. Unfortunately, the reptiles are perfectly adapted to Florida’s environment: Their cryptic coloring makes it easy for them to hide among the thick and wild flora. You could be standing next to a 100-pound snake coiled up under the grass and never know it was there. So we’ve enlisted some two dozen male pythons, with surgically implanted homing beacons, to lead us to nests of females.

We euthanize some of the ones we trap and cut them open to catalog their diet. It’s like a crime scene. I’ve gone into one’s stomach and had a dozen bobcat claws spill out into my hands. Inside another we found a gator—and with it the remnants of a turtle and snail that had been the gator’s own supper. We have evidence of the snakes eating more than 24 species of mammals and 36 types of birds.

Seeing them feed is even more gruesome. I once came across a small, 31-pound female devouring a 35-pound fawn. It was hard not to look away, but we had to consider: If an animal of this size is downing such large prey, what could a bigger one do? Burmese pythons can grow to around 20 feet long and weigh in excess of 200 pounds. They even feast on other natural predators. It’s only a matter of time before we find one with an endangered Florida panther in its belly.

The 2017-18 season was set to be a bounce-back year for Florida oranges. We’d had almost a decade of decline due to a bacterial infection called citrus greening, which clogs the veins of the plant and stops nutrients from reaching the fruit. But tweaks to irrigation and nutrition seemed to be yielding a healthier crop. Then, Hurricane Irma took the most destructive path possible: through the center of the state, the heart of the industry. My ­family’s been growing since 1920, and it was by far one of our worst years.

Greening stresses trees. They seem to react by producing way more fruit than they’re capable of, and wind up ditching part of the payload about a month before harvest. In the end, we’ll get about half of what healthy plants would bear; what’s left is smaller, contains 10 to 20 percent less sugar, and has a greenish tinge. For sick trees, adversity—like cold weather or dry soil—​has an amplified effect.

When Irma came through in September 2017, the crop was only about two months from harvest. After the storm, fruit and leaves blanketed the ground. One grove lost about 75 percent of its yield. Even our farms farther north, which didn’t take a major blow from Irma, had an off year: A couple of months later, a freeze killed a big chunk of the late-season crop.

Between fruit loss, care upgrades, and the threat of more and worsening storms, we can barely break even. Spotty quality hurts our economic prospects more, causing the state to lose market share to places like California. Botanists are working hard to mitigate greening. But some farmers have already sold their land and fled the industry before losing everything.

Salt in an open aquifer

René Price, Hydrologist and Chair of the Department of Earth and Environment at Florida International University. As told to Eleanor Cummins.

The 21 million residents of Florida get the vast majority of their drinking water from two aquifers: The Biscayne, which sits below the Everglades, feeds the south, and the larger Floridan aquifer system supplies areas north of that. If the flow were working properly, the ground would filter rainwater, and the purified liquid would land in our subterranean reservoirs, which humans would then reach via wells and pumps.

But our fresh water faces many stresses. A booming population overtaxes wells, and sudden downpours spread pollutants like fertilizer runoff into the supply. All the while, the ocean has advanced farther inland than ever before, pouring saltwater into these struggling reserves. The trend impacts the whole state, but most urgently, it threatens those who tap the Biscayne—the 2.5 million residents of Miami-Dade County.

Since moving to South Florida in 1997, I’ve completed three surveys of the sea’s advance into the Biscayne aquifer. We analyze well-water samples for chemical signatures indicating salinity, and then map how far the salt water moved. From 2001 to 2011, the creep was slow and steady, but its clip has doubled, totaling almost 4 inches since 2011.

It will take major work to restore fresh water or keep what we have. The South Florida Water Management District uses our reports to help monitor the wetlands and pull levers to control the supply. For example, they can trap excess rain in ditches to have on standby. Or they can rehab mangroves in the Glades, which might help gird against saltwater. It’s a big job, but I’m optimistic, though we have a lot to figure out.