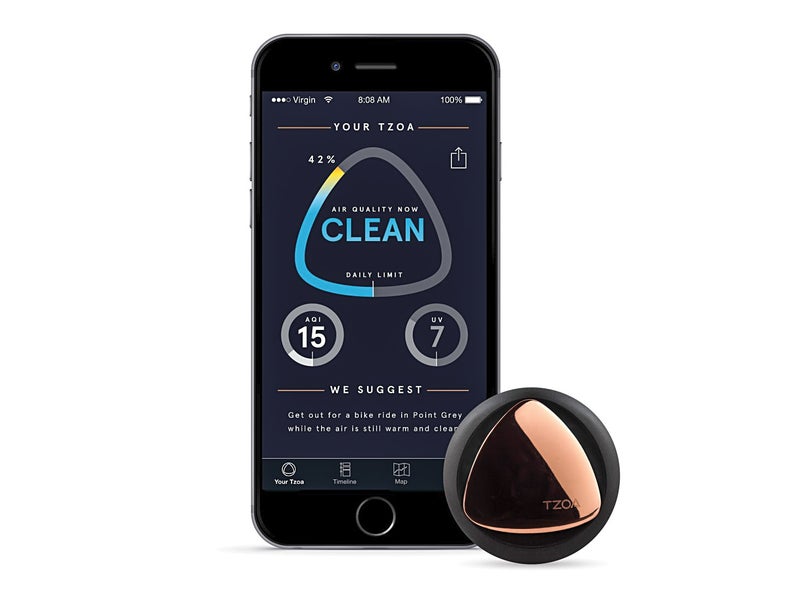 Journeyman electrician Kevin R. Hart and nurse Laura Moe are the type of people who attend Environmental Protection Agency events for fun. They’re also the type who leave an event, as they did in 2013, determined to help solve the planet’s single largest environmental health risk: air pollution. Most cities rely on just a handful of expensive air monitors to detect hazardous pollution levels. Hart and Moe decided to build a wearable device that collects data everywhere a person goes.

After planning out how the sensor would work, the pair turned to the resources at MakerLabs, a community workspace in their native Vancouver, British Columbia, for further development. “We used basically everything in the building,” says Hart. A group of physicists renting space on the top floor worked with them to build an accurate air pollution monitor smaller than anything on the market. Industrial designer Afshin Mehin helped make the device beautiful. The size of an Oreo cookie, the sensor measures particulate matter, a key air pollution component, as well as ultraviolet light.

Hart and Moe plan to sell TZOA, as they named the monitor, for $99, in late 2015. Citizen scientists want the sensors to pinpoint polluters, but Hart sees bigger potential for individuals who want to protect their health. Using data from TZOA, parents can keep infants away from pockets of pollution, and athletes can plan workouts for the least-polluted routes and times of day.