Watch This Futuristic Vat Of Water Paint A Cat 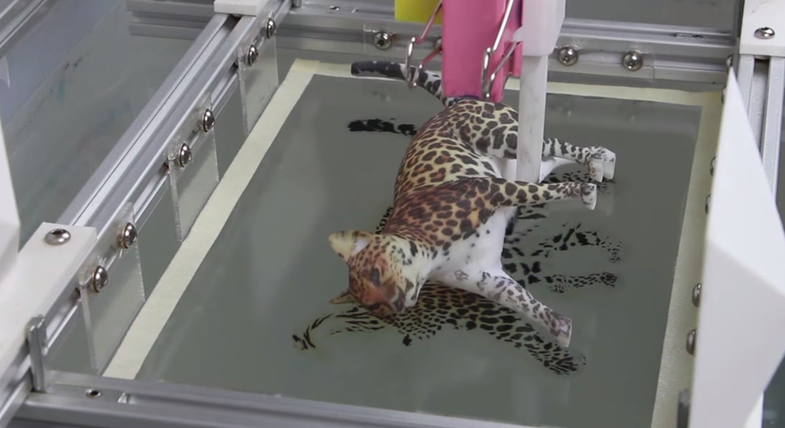 Dunking a statue into a bucket of paint usually won’t give you anything other than a monochromatic result. But dunk a statue into this vat of water coated with a layer of painted film, and the results are pretty incredible.

The video above and the accompanying paper were published by researchers from Columbia University and Zhejiang University. They show how a layer of plastic film can be perfectly calibrated to coat textured 3-D objects in just minutes–something that hasn’t been done before.

Using colored film and a vat of water to apply cool designs and graphics is nothing new; it’s a technique that’s used by places like automotive shops to get those amazing flames and patterns onto motorcycle helmets for years now.

But while flames can go anywhere on a helmet, and still look … like flames on a helmet, having a cat face show up on a cat figurine’s face is a bit trickier. You want to make sure that the color for the nose ends up where the nose should be, and not chilling in the middle of the cat’s forehead with the eyes located somewhere near the ears.

When you’re transferring paint from one flat surface to another, that’s not as much of an issue: just line up the edges, and all should be well. But with a 3-D model, the researchers had to first figure out what parts of the cat would enter the water bath first as it was lowered in by a robot arm. A computer model showed how the cat figurine would enter the water, and then plotted out how to get the design onto the model. For the cat, the team ended up using three separate paint films (one for the face, one for the left side, and one for the right side) to create one seamlessly painted cat. Each of the films was printed out using a simple inkjet printer, laid on top of the water bath, then applied to the cat.

The method works on many different surfaces, including plastic, metal and wood. There are still some limitations. The system isn’t fully automated, and concave surfaces (like the interior of a pet bowl) remain a difficult task for this method. But a 3-D printed paint job to match the 3-D printed objects of the future? Sounds purrfect.