Debate: Who Was The Best Star Trek Engineer? 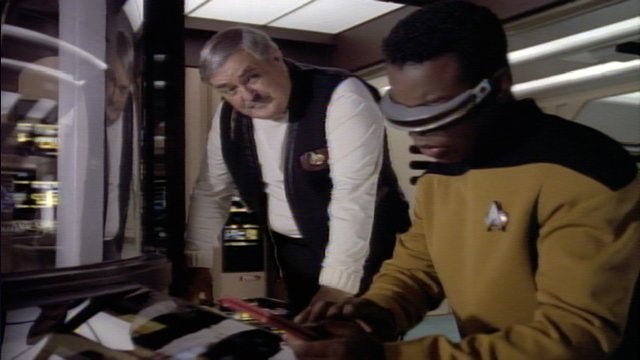 LeVar Buron and James Doohan in one of the greatest cameo episodes in "Star Trek" history. CBS
SHARE

With the imminent release of Star Trek: Beyond on Friday, it’s Star Trek week here at Popular Science. In addition to coverage about the movie, upcoming television series, and in general all things Trek-related, our staff is lifting the veil on one of our nerdiest moments yet. Photo Director Thomas Payne, Social Media Editor Jason Lederman, and Assistant Editor Sarah Fecht, along with contributing writers Kelsey D. Atherton and Mary Beth Griggs–all Trekkies–sat down to hash out the best of the best rankings in Starfleet.

With part one, we present the transcript of our discussion over the best engineer in Starfleet history.

Sarah: I’m going to say my favorite engineer, as a person, is O’Brien because you just get to know him so much better in DS9. You see his family life, his relationship with his wife and his daughter. But I think Geordi is the best engineer because he’s doing like crazy physics and weird experiments and inventing new things.

Jason: He also has the ability to see a lot of things that normal people, and normal engineers can’t, because he gets the full IR spectrum on his VISOR.

Thom: I like them both as characters. I’m with you Sarah, I love Chief O’Brien. He’s probably one of my favorite characters. Especially in DS9 where it’s more fleshed out who he was.

Sarah: We don’t really get that with Scotty or anybody else.

Thom: You get to see his personal and social life, like his friendship with Julian and all of it. But yeah, we’re not talking about Scotty.

Jason: We’re not. I mean Scotty…

Jason: I love Scotty, and Scotty is super fun, but the problem is 95 percent of the time, it’s just “Scotty I need more power.” “I cannot do it Captain, she’s going to blow.”

Thom: I think he gets more fleshed out in the movies. You only learn his name’s Montgomery Scott when they blow up the ship in Search for Spock. That’s the first time you ever hear his name, his full name. Which I thought was pretty badass when I was a kid. That little countdown, and everyone’s giving their full rank and their full name. And when he’s holding his nephew in Wrath of Khan. And when he’s trying to stop Kirk from going into the–“he’s already dead, Jim, he’s already gone.” You get all that kind of more fleshed out stuff in the movies than you did in the 60’s show.

Jason: None of them were really fleshed out in the 60’s show all that much.

Kelsey: In the Original Series, he’s the archetype right? You start there and everything else builds on it. So they’ve established that oh, yes, Scotty’s the engineer in the boiler room. He does that very well, but I think there are more interesting things done with other characters in the role later.

Sarah: Yeah, it’s kind of interesting that because they made him such a blank slate, it allowed other interpretations.

Mary Beth: For me, I think that Scotty is actually one of my favorite characters. Even with the new interpretation of Scotty, he’s just this interesting, frustrated person that I always enjoyed watching. In terms of an engineer’s engineer, I think O’Brien gets it just because he gets put in these awful situations, and he’s happiest when he’s tinkering with everything and when there are serious problems. He talks about how bored he was in transporter room because there wasn’t much to fix. But I choose Georgi in terms of being able to be a technically better engineer. He’s got the advantage because he’s not just a regular human.

Thom: We’re not even talking about the other ones. What’s her name?

Mary Beth: She is good.

Thom: She’s interesting. They kind of fleshed out her story a little bit.

Mary Beth: She’s part of the rebel, the engineer pirates…

Jason: Right, she’s the chief engineer of the rebels and she’s half human, half Klingon. She’s got temper issues. She ends up falling in love with… Tom Paris.

Thom: Tom Paris, and they have a baby in the show. Spoilers!

Sarah: Scotty and Chief are great, but in a way they’re sort of mechanics, like repairmen–like really, really smart repairmen–but Geordi is the one who’s doing theoretical physics.

Thom: Him and Data were definitely doing more science-based stuff.

Jason: Geordi specifically hits the nice balance of engineering and personal life too. We get a couple of those story arcs. The one where he falls in love with the engineer from the holodeck and then later on meets her in real life and she’s different.

Sarah: Geordi’s got issues though. He’s always falling in love with computer women.

Jason: Geordi does fall in love with a lot of people.

Thom: I do like in the movie where he sees the sunset for the first time and they fleshed out that part. Remember that part?

Jason: Should we talk at all about Tripp from Enterprise?

Thom: Tripp was a cool…

Jason: It’s like he’s a nice southern boy. He’s the engineer on the first flagship or starship which is cool.

Jason: T’Pol was just a more interesting character to watch.

Sarah: So do we all agree that Geordi is the best engineer, or are you holding out for Scotty, Mary Beth? 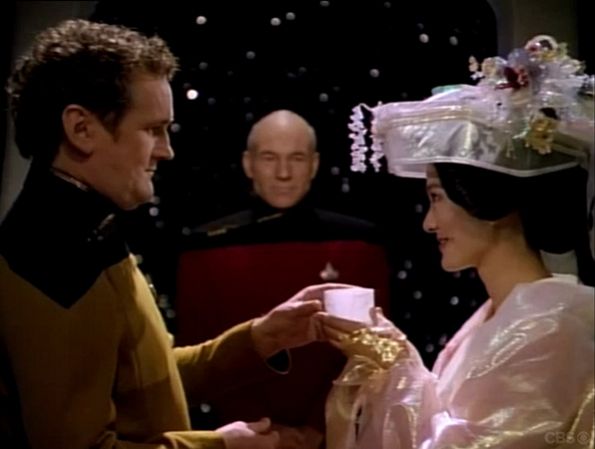 Miles O’Brien gets married, by the captain no less.

Mary Beth: I’d probably be holding out for O’Brien if anything. I think that you can argue me into Geordi just because he does have the more technical advantages and is developing more. So he’s a different kind of engineer. In terms of the best mechanic, I think O’Brien hits it out of the park.

Sarah: So nobody’s going to argue for Lt. Barclay then?

Thom: Another person that falls in love with his hologram.

Jason: He becomes addicted to his holograms.

Thom: Which I can see a lot of people would have that problem in the future. It couldn’t be just Barclay.

Thom: Total holodeck addiction. People fall in love with all sorts of stuff.

While the race was close, we’re going to give this one to Geordi, one of the most memorable and well-developed characters in the canon. He may not be a whisky expert, but we’ll raise a glass to him nonetheless.