In the cloud, probably 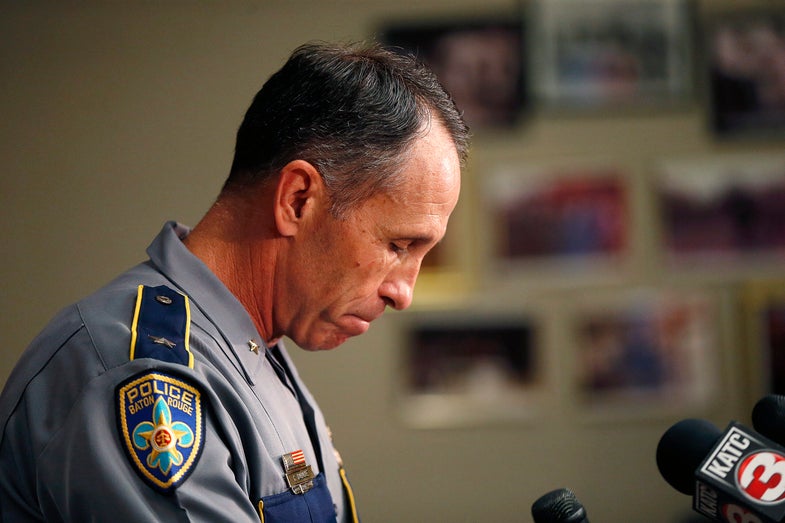 Baton Rouge police chief Carl Dabadie, Jr. speaks at a news conference at police headquarters in Baton Rouge, La., Wednesday, July 6, 2016. The department was responding to the shooting by police officers of Alton Sterling, who was killed outside a convenience store where he was selling CDs. (AP Photo/Gerald Herbert). Gerald Herbert
SHARE

Last night, Alton Sterling of Baton Rouge, Louisiana was shot by one of the two police officers holding him pinned on the ground. We know this because there’s video, recorded by a cell phone camera, that spread online last night. It shouldn’t be the only video of the incident. Louisiana police are equipped with body cameras, small devices designed to capture the actions of the officers.

We likely won’t see the police camera footage immediately, as any evidence from the shooting will become part of a Department of Justice investigation. Yet there’s a chance the footage won’t appear at all.

“State Rep. Denise Marcelle said she was told by Baton Rouge Police Chief Dabadie that body cameras worn by both officers fell off during the incident and do not show the shooting,” reports WAFB, a Baton Rouge television station. “Marcelle said the chief told her there is footage of the shooting from the dashboard camera of one of the patrol cars as well as from at least one store surveillance camera.”

That’s unusual for a few reasons. The first is that Louisiana’s laws regarding body cameras are extremely favorable to police.

“WHEREAS,” the bill that set up a task force for body camera use reads, “the use of video footage might discourage citizens from filing unfounded complaints against officers, which could save the agencies a significant amount of time and funds that would otherwise be spent on lengthy investigations and lawsuits.”

A second law on body cameras, set to take effect on August 1st, 2016, “Exempts video or audio recordings generated by law enforcement body-worn cameras from Public Records Law.” Added to that is the “Blue Lives Matter” law on the books in Louisiana, the first in the nation which classifies violence against police as a hate crime. The law, as it stands and especially regarding body cameras, is extremely favorable to police.

Another reason it’s odd to claim the cameras fell off and didn’t record video is that Baton Rouge police already had a problem with body cameras falling off and not recording video.

In news that was re-circulated on Twitter, local publication The Advocate reported back in January that Baton Rouge police would be switching from L-3 brand body cameras to Taser brand cameras due to “technical glitches” with the L3 cameras, but Taser says this report is not up-to-date and is not correct. “No TASER (Axon) cameras were, at the time of the shooting, deployed and there are none deployed now,” said Sgt. Matt Johnson at the Baton Rouge PD mobile data division, in a quoted statement provided by Taser.

“While they are not a cure-all,” states Campaign Zero, an organization that wants to end police violence, “body cameras and cell phone video have illuminated cases of police violence and have shown to be important tools for holding officers accountable. Nearly every case where a police officer has been charged with a crime for killing a civilian this year has relied on video evidence showing the officer’s actions.”

Campaign Zero includes a length list of best practices for police body camera use to ensure public accountability. Louisiana law fails to live up to many of these standards, which is why Campaign Zero also emphasizes legal protections a second source of footage: the right of bystanders to record police.

It’s an important right to secure and preserve, especially as companies patent and develop devices that remotely disable cameras.

Correction: this story originally cited older, outdated reports about what body cameras the Baton Rouge Police Department were using at the time of the shooting in question. The story has since been updated with new information and the statement from Taser.