A Norwegian engineer reinvented the way helicopters keep themselves stable. The result: create a radio-controlled craft that can take off from the palm of your hand 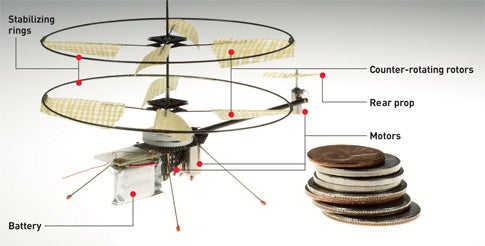 Helicopters are tricky beasts to keep aloft and stable. Full-size birds do it with skilled pilots, while most unmanned craft rely on gyroscopes and autopilot. But the 3.3-gram Picoflyer is too small for any such luxuries. Instead, Petter Muren, a Norwegian engineer who builds mini copters to fly indoors during long Scandinavian winters, reinvented the stability system.

To stay pointed in one direction, the Picoflyer, like many real whirlybirds, uses two sets of counter-rotating rotors, which offset the opposing forces that occur when an engine drives a propeller in flight. (If the rotors are driven one way, the engine and fuselage spin in the opposite direction.) But to keep from pitching or rolling out of control, the Picoflyer relies on a passive- stability system that adds no extra parts or weight. If the helo starts to tilt or lean one way, the ringed rotors naturally tilt equally in the other direction, bringing the bird back to level. Continuous little adjustments help it maintain a stable hover.

The U.S. military has expressed interest in Muren´s micro-copter as a surveillance drone, and universities are keen on them for â€flying swarmâ€ studies. But most interested are toy and hobby manufacturers- Muren´s passive-stability system has already inspired a larger radio-controlled hobby chopper called Bladerunner.