It’s an aviation story so cool we’re kind of upset we didn’t hear about it a month ago when it... 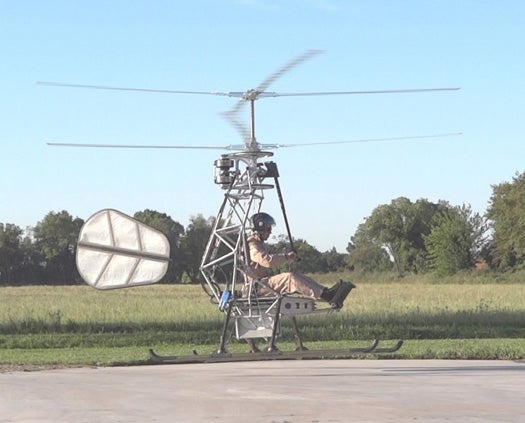 It’s an aviation story so cool we’re kind of upset we didn’t hear about it a month ago when it happened. Back on August 12th electrical and aerospace engineer Pascal Chretien, working with the backing of French company Solution F, made the world’s first untethered, all-electric manned helicopter flight. And it didn’t even show up on our radars–probably because he only reached an altitude of about one meter.

The helicopter was one of Chretien’s own design that he patched together nearly completely by himself in about 12 months. And his 2 minute and 10 second flight means he beat helicopter powerhouse Sikorsky to the prestige of being the first to get a manned, untethered electric helicopter off the ground.

But it wasn’t easy. Helos aren’t really great candidates for electrically-driven power plants because they are so power hungry. While airplanes and cars require a lot of juice to get moving, both of them can coast on momentum. An electric airplane sucks up a lot of power during takeoff, but once airborne it can cruise and then land with relatively little power suck.

Helicopters, on the other hand, are pretty much fighting gravity all the way through a flight. So when Solution F asked Chretien to build and fly the first manned electric helicopter, he got to work putting together the leanest, lightest, most efficient design he could conceive of.

The result is what you see above: a coaxial rotor design (that’s the kind with two rotors that rotate in opposite directions–a favorite of Sikorsky) that dispenses with a weighty and inefficient tail rotor and a heavy cyclic control, opting instead for a simple tail fin and a blade tilting system that the pilot uses to manually pitch the blades one way or another to control the helo’s direction of flight. He crafted a frame from sturdy, crash-worthy aluminum tubing to keep him safe in case of a rough landing, and then packed a bunch of notoriously volatile Lithium ion polymer pouch cells under the seat to make sure he wouldn’t be safe in case of a rough landing. To quote Chretien: “In case of crash I stand good chances to end up in kebab form.”

Gizmag has a great breakdown of the design process and the different components that came together to make this historic flight happen, as well as a thorough photo gallery of the helo and its historic flight. Click through below.