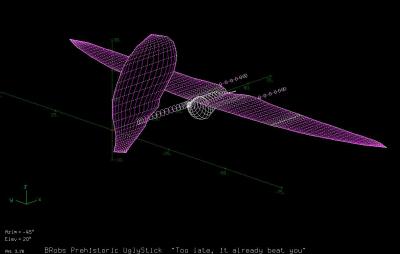 Two disparate concepts can sometimes join together to create a perfectly harmonious third. Few people would have thought that peanut butter and jelly would taste good together, but they do. No one would have guessed that combining two gases — hydrogen and oxygen — would produce the liquid called water. But they do.

The verdict is still out on what exactly will be the outcome of a paleontologist, Sankar Chatterjee, putting his scientific head together with that of an aeronautical engineer named Rick Lind. But so far the results have been intriguing. The object of their collaboration is a project called the pterodrone, an unmanned aerial vehicle modeled on the flying prowess of an early Cretaceous pterosaur, Tapejara wellnhoferi.

Aeronautical engineers indulging in cross-disciplinary collaboration is not without precedent. Nature’s designs are the most efficient and innovative ones man has ever witnessed, and engineers are always looking for ways to apply more efficient and innovative designs. Taking inspiration from nature to enhance engineering design and application even has a name: biomimicry. Lind just happens to have reached so far back in time for his inspiration that he needed a paleontologist to explain how the creature worked.

“It will look like an airplane. But with a very weird tail on its nose,” says Lind, an assistant professor of aeronautics and mechanical engineering at the University of Florida.

The pterosaur had a cranial sail as part of its nose that served as both a front rudder, and as a mechanoreceptor to sense temperature, pressure, and wind direction. The pterodrone will have the same. In traditional aircraft, the tail is placed on the back of the aircraft, for a stabilizing effect, says Lind. Having the tail on the front will minimize the pterodrone’s turning radius, but also destabilize the craft, which will have to compensate with wing motion.

“We’ll change the aerodynamics of the wings to provide more of a stability contribution, and thus compensate for the vertical tail destabilizing,” he explains. “[The wings] will have two joints, similar to a shoulder and elbow joint. They’ll be able to rotate vertically and front-back horizontally.”

To create the concept for the pterodrone, Lind exchanged emails and phone calls for about a year with Chatterjee, a professor of geosciences and museum science at Texas Tech University. “It wasn’t as bad as we thought it was going to be at first. Sankar has worked with aerodynamics people,” says Lind. “I’ve worked with bird and bat people for a couple years, so there was some commonality.”

Inspired by the pterosaur, which flew above the Brazilian landscape 115 million years ago, the conversations grew into a concept for a unique aerial vehicle, one that could fly into hard-to-reach areas and gather information. According to Lind, future plans call for the pterodrone to have a video camera, acoustic microphone, and chemical sensors. But the hard part hasn’t yet begun. “The biggest challenge is really the building part,” he says.

The initial design for the pterodrone calls for a wingspan of roughly 30 inches and weight between about one and two pounds, according to Lind. Initially, it will not be designed to go any faster than 30 or 40 miles per hour. To keep the aircraft light but durable, the team plans to use carbon fiber for the skeleton and nylon for the skin. To power the aircraft, Lind says they’ll look at something simple, like the kind of off-the-shelf servomotor that powers radio-controlled flyers.

In addition to its enviable flying abilities, Tapejara was able to walk and run on two or four legs, and navigate on the water as well, using its wings as sails.