Twenty years in development, the new Osprey tilt-rotor flies faster and farther than any helicopter and goes places airplanes never could 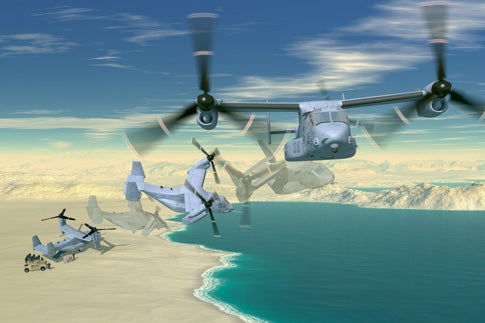 As the Osprey lifts off in helicopter mode, the onboard computers, commanded by the pilot, control it by changing the pitch of the rotor blades-the angle at which they bite into the air as they spin around the hub. To accelerate the MV-22 into airplane-like flight, the nacelles rotate forward, and the prop-rotors transition from generating lift and controlling the direction of the aircraft to simply creating forward thrust. At higher speeds the air flowing over the wings keeps the Osprey aloft. The helicopter controls slowly lock out, and the Osprey flies like a conventional airplane, controlled by the ailerons on the wings and the rudders and elevators on the tail.

Engines
If either of the two Allison AE 1107C turboshaft engines fail, a central driveshaft inside the wing diverts power from the working engine to spin the prop-rotor of the disabled one. If both engines fail in airplane mode, the pilot can tilt them up to 60 degrees (to keep the blades from hitting the ground) and glide to a controlled landing.

Fuselage
Up to 24 Marines or 20,000 pounds of gear fit into the 864-cubic-foot interior. The intense downdraft from the rotors makes it impossible for troops to exit from the side, so they slide down ropes from the rear ramp. Likewise, troops can´t fire machine guns from the side doors in the classic helicopter style, in part because the engines and propellers block the field of fire. Instead there´s a single gun in the rear.

Prop-rotors
The MV-22´s 38-foot-diameter prop-rotors are more than twice the size of any propeller but smaller than many helicopter rotors. The inner sections are twisted like prop blades; the outer sections are straight like rotors. The counter-rotating blades negate each other´s rotational forces, eliminating the need for a tail rotor to keep the fuselage straight.

Wings
To support powerful engines and big whirling rotors at the tips, the wings are made almost entirely of superstrong and expensive carbon-fiber composite material, which also helps suppress vibrations.

Why Did It Crash in Testing?
The MV-22 suffered four crashes in testing that killed 30 Marines. The worst, in Marana, Arizona, in April 2000, killed 19. The cause: a phenomenon called vortex ring state (VRS), which is specific to helicopters. VRS happens when a copter descends rapidly with little or no forward air speed. The aircraft slips into the wake created by its own blades, and the churned-up air begins to recirculate through the rotor. Caught in this vortex of disturbed airflow, the copter loses lift and begins to sink. Pouring on power-a pilot´s instinctive response to a falling craft-only disturbs the air further, making the bird drop faster. VRS is so dangerous to tilt-rotors because the effect can be asymmetrical: If only one rotor experiences VRS, the aircraft will quickly roll out of control instead of merely sinking more quickly. The Osprey now has a VRS warning system and its pilots are trained to recognize the signs of VRS and to escape by simply easing the Osprey forward. But critics argue that this Achilles´ heel compromises the Osprey´s ability to navigate combat zones with the speed necessary to avoid attack.

Range: 500 miles with one refueling