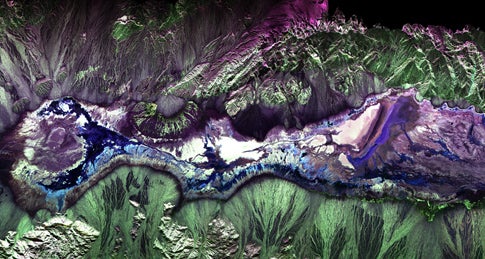 Southern Californians may be living on borrowed time. At least two sections of the notorious San Andreas Fault, a hotbed of tectonic tension, are apparently overdue for a huge earthquake that could devastate Los Angeles County or San Francisco. Though they can neither prevent nor pinpoint it, scientists would like to get as much information as they can as to where and when the next “Big One” could happen. Increasingly, they’re turning to air and space to learn what’s happening 10 miles underground.

Previously, the only ways to scan the San Andreas involved using radar satellites launched by the European Space Agency, Canada, and Japan, but those aren’t dedicated to earthquake study, and not all their data is readily available. 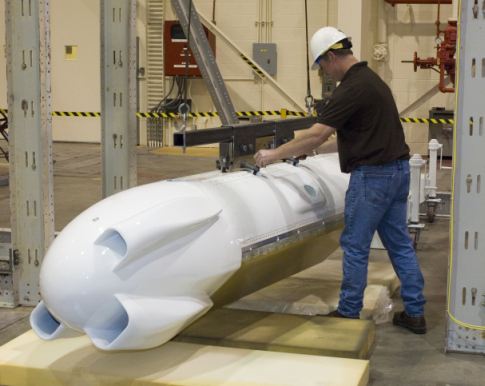 To create a map of California’s fault systems, NASA attached a radar mechanism, called Uninhabited Aerial Vehicle Synthetic Aperture Radar — UAVSAR — to the underbelly of a Gulfstream III jet based at NASA’s Dryden Flight Research Center. It sends microwave pulses at the Earth’s surface to detect small deformations, like those caused by earthquakes, landslides, and volcanoes. The Gulfstream flies at 45,000 feet, collecting radar data over a selected region. A few months later, it flies the same route again and examine how the underground landscape has changed. The first tests started over northern and southern California last fall, and so far, scientists have constructed an initial map of the entire San Andreas and portions of the Hayward fault near San Francisco. The mapping cost about $1 million; the initial cost to develop the UAVSAR, intended to study a wide variety of Earth phenomena, not just faultlines, was $30 million.

Though a person pilots the plane now, the system could also be used with unmanned aerial drones.

According to Andrea Donnellan, one of three JPL principal investigators, the repeated fly-bys will allow scientists to “see” strain building up along the fault lines. Along the San Andreas fault, the Pacific and North American tectonic plates grind against each other as they move in opposite directions, sliding about 1.4 inches a year.

“This will give us a much clearer picture of which faults are active and at what rates they’re moving, both before earthquakes and after them,” Donnellan said.

The technology won’t be able to warn of an immediate earthquake threat — the growing tension will be visible after several years of observations — but it will work with land-based seismographs and “creep meters” to help scientists understand how and where temblors might originate.

The notorious San Andreas, related to the 1989 earthquake and directly responsible for the devastating 7.9-magnitude 1906 San Francisco quake, has several sections, some of which are more active than others. The southern tip has been asleep for about 320 years — which, according to a 1,500-year paleoseismological record, makes it between 20 and 70 years overdue.

A huge quake in the southern San Andreas could devastate an eight-county region, kill up to 1,800 people, injure 50,000, displace a quarter of a million people, damage 300,000 buildings, and cause $213 billion in damage, according to an estimate last year from the U.S. Geological Survey.

If it happens, the radar plane could also help scientists and rescuers determine which areas were hit the worst, said Eric Fielding, another JPL principal investigator on the radar mission.

Fielding’s research will center on the Hayward fault, a branch of the San Andreas system located along San Francisco Bay. The Hayward was responsible for the great 1868 quake that destroyed most of the small mission town. Many seismologists believe it will be the next fault to release its pent-up energy. The rock record shows the Hayward has gone haywire about every 140 to 160 years.

If those regular intervals aren’t enough to raise concern, last April, scientists at the Berkeley Seismological Laboratory and the USGS estimated that the Bay Area faces a 63 percent chance of a magnitude 6.7 or larger quake between now and 2032.

About 7 million people live in the affected area, which is one reason it’s hard for scientists to accurately map the fault. It runs through individual buildings, including UC Berkeley’s football stadium. The UAVSAR plane will provide a better picture of the whole region than a satellite could; the plane can map the path to an accuracy of 15 feet.

In the meantime, Donnellan said UAVSAR will give scientists a head start on understanding California’s geologic faults.

“Its data will also help state and local governments mitigate losses from future earthquakes, including the inevitable ‘big one’ we all know is in our future,” Donnellan said. 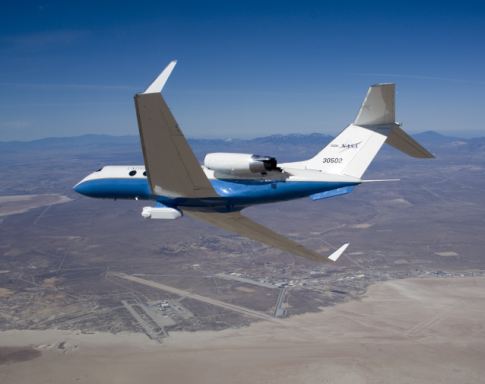