Porscheâ€™s latest chronograph is the first watch with a digital display thatâ€™s driven by springs and gears. Hereâ€™s a look at a few of its 800 parts 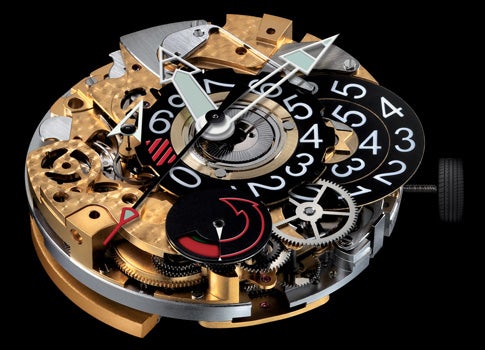 **TIMEKEEPING
**
The Porsche´s timekeeping mechanism is similar to other mechanical watches but is very accurate and durable, thanks to its precise design and assembly. The slow release of tension from a wound mainspring supplies the watch´s power. As the mainspring uncoils, gears transfer its energy to a balance wheel, which converts the energy to measured beats by rotating back and forth at a set rate (28,800 times an hour, or four times a second) like a small pendulum. This moves the escape wheel, the first of a number of gears that reduce those beats to one per second. These drive the second hand, which triggers the minute and hour hands.

**WINDING
**
A freely spinning rotor weighted on one side with palladium-gold alloy moves in circles around the case as the wearer swings his arm. That circular motion winds the watch´s springs through a series of gears.

A chronograph is like a stopwatch-it tracks elapsed time up to 10 hours. The Porsche is the first mechanical watch with a digital display: numbered dials instead of hands to show hours, minutes and seconds passed.A separate spring drives each dial, and each full rotation of the chronograph´s second hand lifts a lever and releases the minutes disc to advance one number almost instantly. That resets the lever for another circuit. Each full rotation of the minutes disc operates a similar lever under the 10-minutes disc, which in turn advances the hours disc.

**POWER RESERVE
**
The power-reserve indicator shows you how long the watch will run without additional winding. Typically, a gear connected to the mainspring turns a gauge as the spring wears down. But the Porsche has three additional springs for the chronograph. When the chronograph is on, the spring turning the minutes disc (which makes 600 rotations in 10 hours) will run out before the timekeeping spring does. So the watch automatically switches to monitoring the chronograph while it is running-a first in watchmaking.

In short, “complications”-mechanisms that do anything other than tell time. Watchmakers innovate by creating new ones, such as the Porsche´s digital display and power-reserve gauge, or by packing in several. The most expensive modern watch, Vacheron Constantin´s $1.5-million Tour de l´Ile, has 16, including sky and moon charts.

Accuracy: Within 4 seconds a day