The Mars rover Spirit landed on the Red Planet on January 3, 2004, for a mission that was scheduled to... 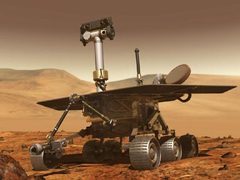 The Mars rover Spirit landed on the Red Planet on January 3, 2004, for a mission that was scheduled to last 90 Martian days, or sols (one sol is about 1.03 Earth days). More than two years later, it looks like the hugely successful mission might finally be coming to an end. The motor that drives Spirit‘s right-front wheel has stopped working, limiting the rover’s mobility. And if Spirit can’t reach the other side of a nearby hill soon, it won’t be able to correctly orient its solar panels for the coming Martian winter. If it doesn’t get enough power over the winter, it won’t be able to run the heaters that keep its electronics from freezing. But even if it fails, its twin rover Opportunity is still rolling on all six wheels. —Michael Moyer

_
The Mars rovers Spirit and Opportunity won a Best of What’s New Grand Award in 2004.
__