The LEMV, being tested soon, is designed to stay aloft for weeks at a time 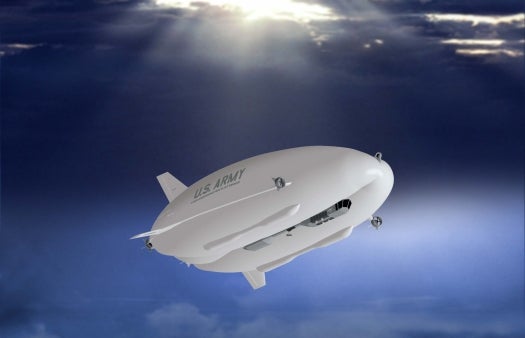 Since the airship glory days of the early part of the century, blimps have certainly lost some of their cachet, relegated to hovering over sporting events and not much else. However, the Army is about to test launch an unmanned hybrid airship to be used for surveillance missions in Afghanistan.

The Long Endurance Multi-INT Vehicle, or LEMV, is an impressive combination of endurance, carrying capacity, and speed (relatively speaking). The aircraft can be launched easily for missions with up to 3-weeks of continuous airtime carrying a 2,500 lb payload at altitudes of 20,000 ft. Larger payloads will lower the aircraft’s ceiling slightly.

Its lift and propulsion systems are equipped to maintain an average speed of 20 kts, but can “dash” at speeds of up to 80 kts when needed. Over the course of its flight the LEMV can cover up to 2,500 miles, over which quite a bit of surveillance information can be collected. It is also equipped with a “rapid deflation device” that will ground the ship quickly if control is somehow lost, keeping it from drifting into restricted airspace and preventing the payload from falling into the wrong hands.

All these stats, however, are for the test device alone. Plans to expand the LEMV’s capabilities after initial testing are underway. The final version might be able to carry payloads of 7,000lbs for month-long trips. If the LEMV becomes a regular surveillance device, silently watching the skies for even longer durations than the current crop of UAVs, we may begin to view the blimp much differently. Oh, the humanity.