Tomorrow's cruise ship will sail through the air, not the water 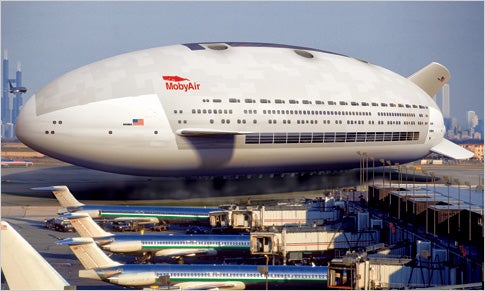 This is not a Blimp. It’s a sort of flying Queen Mary 2 that could change the way you think about air travel. It’s the Aeroscraft, and when it’s completed, it will ferry pampered passengers across continents and oceans as they stroll leisurely about the one-acre cabin or relax in their well-appointed staterooms.

Unlike its dirigible ancestors, the Aeroscraft is not lighter than air. Its 14 million cubic feet of helium hoist only two thirds of the craft’s weight. The rigid and surprisingly aerodynamic body-driven by huge rearward propellers-generates enough additional lift to keep the behemoth and its 400-ton payload aloft while cruising. During takeoff and landing, six turbofan jet engines push the ship up or ease its descent.

This two-football-fields-long concept airship is the brainchild of Igor Pasternak, whose privately-funded California firm, Worldwide Aeros Corporation, is in the early stages of developing a prototype and expects to have one completed by 2010. Pasternak says several cruise ship companies have expressed interest in the project, and for good reason: The craft would have a range of several thousand miles and, with an estimated top speed of 174 mph, could traverse the continental U.S. in about 18 hours. During the flight, passengers would peer at national landmarks just 8,000 feet below or, if they weren’t captivated by the view, the cavernous interior would easily accommodate such amenities as luxury staterooms, restaurants, even a casino.

To minimize noise, the aft-mounted propellers will be electric, powered by a renewable source such as hydrogen fuel cells. A sophisticated buoyancy-management system will serve the same purpose as trim on an airplane, allowing for precise adjustments in flight dynamics to compensate for outside conditions and passenger movement. The automated system will draw outside air into compartments throughout the ship and compress it to manage onboard weight.

The company envisions a cargo-carrying version that could deliver a store’s worth of merchandise from a centralized distribution center straight to a Wal-Mart parking lot or, because the helium-filled craft will float, a year’s worth of supplies to an offshore oil rig. “You can land on the snow, you can land on the water,” Pasternak says. “It’s a new vision of what can be done in the air.”