With its rocket-engine tail and fuel-packed fuselage, this modified business jet might be the first private craft to launch tourists into space 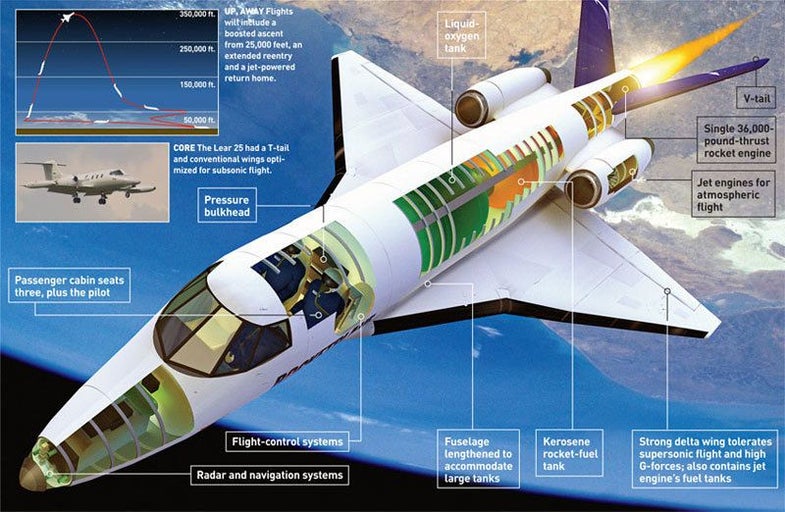 Can’t decide where to spend your fortune on a trip out of Earth’s atmosphere? Check out our Tourist’s Guide to Space.

Reda Anderson doesn´t believe in intangibles. She made good money in Southern California real estate, and she sees no reason to put funds in an investment she can’t see, touch, and ask pointed questions about. That´s why she´s in Guthrie, Oklahoma, peering into the sawed-off fuselage of an old business jet. She has a lot at stake in this investment-this old bird will soon be taking her into space.

Structural engineer Derrick Seys carefully explains the lines and arrows drawn on the outside of the ship, which resemble the markings doctors place on patients being prepped for surgery. His crew will splice together the bodies of two jets to add 20 inches of length. The extra room will accommodate kerosene and liquid-oxygen tanks, which will power a 36,000-pound-thrust rocket engine they plan to stick up the plane´s tail. The rocket engine, plus an all-new delta-wing assembly taking shape on a scaffold beside the fuselage, will turn this former Lear 25-once a high-flying chariot for business execs-into an even higher-flying spaceship.

This is the new face of astronautics, where innovations are driven not by government contracts but by rich folks seeking once-in-a-lifetime thrills. Anderson, a 66-year-old grandmother, is the first customer of Rocketplane, a small company selling $200,000 rides into suborbital space that will last all of 45 minutes from liftoff to touchdown. She´s here to make reasonably sure that the thing won´t blow her to bits over the Oklahoma plains. “If you think I don´t know that I could absolutely die in this,” Anderson says matter-of-factly, “you´ve got to be an idiot.”

Who would be crazy enough to try to blast a rocketized Learjet (hardly a vehicle designed for the rigors of spaceflight) at three times the speed of sound out of the atmosphere-with demanding rich people on board? Top engineers recruited from NASAand mainline aerospace firms such as Lockheed Martin, Cessna and even Learjet itself, as it turns out. Sometime in 2008, Rocketplane says, its creation, called the Rocketplane XP, will take off from a runway powered by the Learjet 25´s stock General Electric CJ610 jet engines with three passengers and a pilot on board. It will climb to 25,000 feet, where it will ignite its rocket. A 70-second boost will send the ship coasting out of the atmosphere-66 miles above Earth-for four minutes of weightless flight and a view stretching west to the Rocky Mountains and south to the Gulf of Mexico. The spaceship will reenter the atmosphere in a controlled, if bumpy, glide like the space shuttle and restart the jets at 25,000 feet for a powered landing back home.

The idea was dreamed up by engineer and Air Force test-pilot instructor Mitchell Burnside Clapp, who formed Pioneer Rocketplane in 1996 to go after the $10-million Ansari X Prize for the first private company to send a reusable spacecraft into suborbital space. The company´s effort never got past the design phase, however-Clapp and partners Chuck Lauer (now Rocketplane´s business-development manager) and entrepreneur Robert Zubrin (who left the venture in 1998) couldn´t find enough cash. Burt Rutan´s SpaceShipOne won the X Prize in 2004.

But the X Prize brought credibility to the idea of private spaceflight and, with it, investment capital. Now the race is on to see who can be first to market with a suborbital tourist ship. Rutan is hard at work on SpaceShipTwo for airline tycoon Richard Branson´s Virgin Galactic. Russia´s Myasishchev Design Bureau has begun selling tickets through Virginia-based Space Adventures on its proposed five-seat, air-launched vehicle. Other ventures in various stages of development are Armadillo Aerospace, Blue Origin, SpaceDev, SpaceX . . . the list goes on. Rocketplane´s own funding comes courtesy of its new president, George French, a space enthusiast who saw Rocketplane´s plan as “a viable small-vehicle option” for reaching space at a profit. His cash and an Oklahoma state tax-credit deal worth $13 million gave Rocketplane the boost it needed to finally get off the drawing board. In fact, the company had enough capital to purchase bankrupt rocket manufacturer Kistler Aerospace early this year; now it´s working to prove that a scheme that at first glance might seem harebrained could actually work.

In early 2004, as one of his first acts as Rocketplane´s president, French hired aerospace engineer David Urie as Rocketplane´s engineering guru. (Clapp left the company shortly afterward, citing “creative differences” with the company´s new management.) A 30-year veteran of aerospace giant Lockheed Martin and its famously secretive Skunk Works design lab, Urie oversaw, among other projects, the development of the X-33 Venture Star, the ship that NASA hoped would replace the space shuttle in the 1990s.

At Rocketplane, Urie immediately began recruiting a mix of veteran engineers and recent grads to pull off his feat. One of his key acquisitions was Bob Seto, Learjet´s program manager for all its models. Seto says that using an existing fuselage instead of designing one from scratch gives Rocketplane a running start in the new space race. “There´s a big cost to designing the details of a fuselage,” he says. “Purchasing the fuselage reduced a lot of that risk and development effort. We don´t have to spend a large amount of time starting from a blank sheet of paper.”

Aiding the effort is the fact that the Learjet is exceptionally well suited to the task. The Learjet 25 was designed for more than three Gs of acceleration, which puts it in the ballpark of what the Rocketplane XP will encounter during its rocket-powered ascent and turbulent reentry. The XP´s new, stronger delta-wing assembly and a reengineered tail will give the craft the increased structural strength it needs to survive 4-G flight. To cope with atmospheric heating on reentry, the ship will rely on a protective coating developed at NASA´s Ames Research Center. The nose, the leading edges of the wing structure, and the jet engine inlets will be titanium, which can withstand higher temperatures than the aluminum used elsewhere in the craft. All these modifications come with a weight penalty. At 19,500 pounds takeoff weight-4,500 pounds more than the Learjet 25-the XP will need plenty of runway to get airborne, so it will take off and land from the 13,500 foot strip built for B-52 bombers at the former Strategic Air Command base at Burns Flat, Oklahoma.

Inside the “Space Limo”

Aerodynamics engineer Gary Lantz, recruited from leading small-aircraft manufacturer Cessna, describes the Rocketplane XP as a “space limo” because of the limited number of passengers it can carry. Reda Anderson likes that term because it conveys exclusivity: more passengers on board would make for more of a space bus, and that´s not the kind of experience she wants. “I like world-class events,” she says-like the private dive to the wreck of the Titanic she took last year-and she doesn´t want to share it with a gaggle of other people. Nor does she mind that the XP´s relatively cramped interior will prevent passengers from floating around the cabin in zero G. It´s the
view she´s after, not a few minutes of free-floating weightlessness.

Rocketplane´s engineers and contractors say their plan will send Anderson to space before SpaceShipTwo´s planned 2008 or 2009 launch. But will it work? Nesrin Sarigul-Klijn, professor of mechanical and aeronautical engineering at the University of California at Davis and a spacecraft-design consultant for commercial space companies t/Space and SpaceDev, has doubts. She fears that the beefed-up Learjet fuselage and the heavy engines will weigh too much. “The first thing they will run out of is propellant,” Sarigul-Klijn says, “and then when they add more propellant, they will run out of volume to put people in.”

But Dan Erwin, an associate professor of astronautics at the University of Southern California, feels that Rocketplane just might have the magic numbers. “I think this is actually doable,” he says. “The mass, thrust, volume-all that stuff I figure can work.” Erwin sees the rocket engine as the biggest hurdle. “There are no show-stoppers in principle,” he says of developing a new rocket safe enough for manned flight, “but there is an awful lot of elbow grease that has to be laid on the problem.”

That task falls to David Crisalli, head of engine contractor Polaris Propulsion. Before starting his company in Oxnard, California, in 1997, Crisalli was an engineer with top rocket maker Rocketdyne. His customers now include Boeing, Northrop Grumman and Rocketdyne. Crisalli took on the project with the assurance that Rocketplane wasn´t about to cut corners on safety to meet its schedule and budget. “There´s a difference between thinking out of the box and being out of your mind,” he says.

Satisfied that Rocketplane fit into the former category, Crisalli brought a group of Apollo-era NASA contractors out of retirement to help him develop a regeneratively cooled (that is, cooled by circulating propellant) rocket engine that can be used over and over again like a jet engine. Polaris completed preliminary design work on Rocketplane´s AR-36 in April and then went to work building it. It´s on schedule for the Rocketplane XP´s first rocket-powered test flights in 2008, after jet-engine-only test flights begin at the end of 2007.

French won´t say how much it will cost to develop and operate the Rocketplane, or when he´ll recoup his investment. But he and his engineers see suborbital space tourism as merely the start of an ever-expanding market that will eventually include same-day global package delivery and ultrafast intercontinental travel. With the Kistler acquisition, French expects to operate flights to orbit for both government astronauts and space tourists visiting commercial space stations.

But first they´ll need a successful debut. Anderson is ready to go.

Michael Belfiore´s book The Entreprenauts: Visionaries and Daredevils of the New Space Age_ is forthcoming from Smithsonian Books/HarperCollins._ 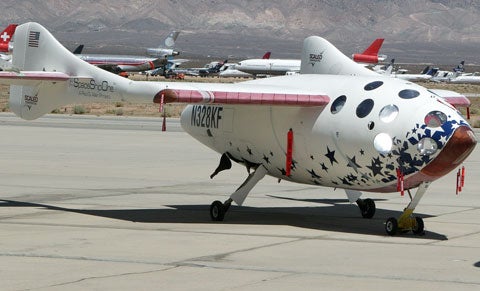 Richard Branson´s company will fly tourists aboard the air-launched, nine-seat SpaceShipTwo, being developed by Burt Rutan´s Scaled Composites [SpaceShipOne is shown at left]. It will use a hybrid solid/liquid-fueled rocket engine. The Experience:Suborbital flight. Passengers will leave their seats during up to five minutes of weightlessness
Departure date:2008
Price:$200,000 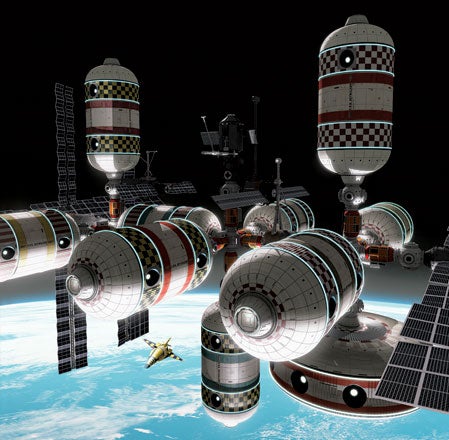 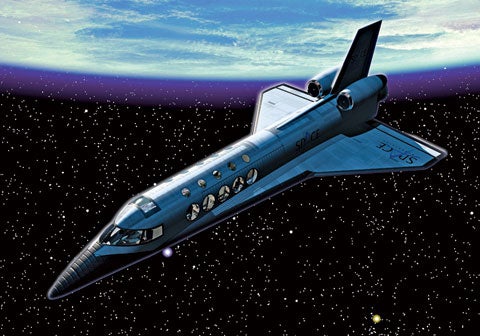 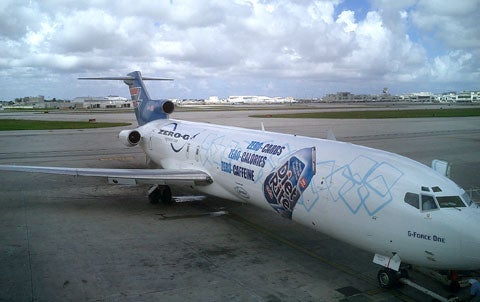